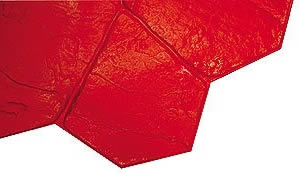 Concrete stamp mats have come a long way from the cookie cutter designs of the 1960s.

Stamping’s popularity peaked in the early 1990s, before the public imagination turned to staining, says Bob Harris, director of product training with The Scofield Institute, operated by manufacturer L.M. Scofield Co. But decorative bordering, custom mat design and other innovations are driving a new wave of interest in putting a distinctive stamp on concrete jobs, he says. “People are becoming more creative.”

Chris McMahon, owner of Architectural Concrete Design Inc. in Levittown, Pa., says his company budgets $15,000 a year for stamps, adding new textures, expanding sets and replacing broken stamps or tired designs. “Textures get better all the time,” he says. “The new ones are more realistic.” 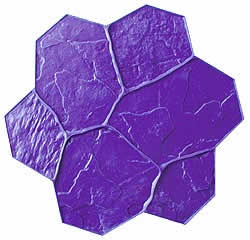 A contractor can build word of mouth with just one good-looking effect, McMahon notes, so picking the right stamp is crucial. “When we have a brick tool that looks a specific way, we become known for having that brick tool.”

So — how does a contractor go about finding the perfect set of stamp mats?

McMahon says he goes to training seminars to test new products. “You can use their tools in real situations,” he says. “But you can’t really tell how good a tool is until you use it on a large job in variable situations. Sometimes it’s a leap of faith.”

Doug Carlton, of Doug Carlton Concrete in Visalia, Calif., says that when he shops for stamps, he sticks mainly with manufacturers who have been in business for awhile. “You want to be able to add to your collection when you need to,” he says.

He grills manufacturers to test their know-how, especially at trade shows. “That’s really the only chance we get to look at those mats before we buy,” he says. “We ask some pretty hard questions.” 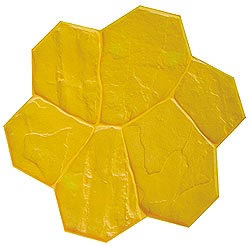 The perfect mat
To ask the right questions, a contractor needs to know what makes a good stamp. “If a tool is a great tool, it takes a lot of the variables out of the stamp portion of what we do,” McMahon says.

Stamp mats should be lightweight, yet rigid enough to support a worker’s weight on wet concrete, he says. “The more rigid the tool the sooner you can start stamping.”

The mats in a set should be equal in thickness and size, and fit together without gaps. Stamps in some sets are not snug matches, according to Steve Johnson, a former contractor who does marketing and product development for Solomon Colors. “You really have to know those stamps to work them,” he says. “It made it really tough to bring in a new employee.”

Mats should also be strong enough to support their own weight when they are lifted, so the edges of a freshly stamped section of concrete are not disturbed, says Carlton. 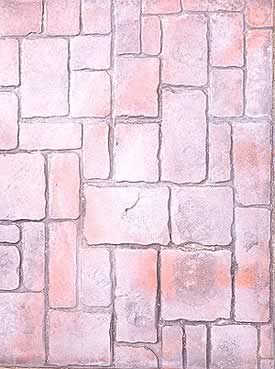 Harris of The Scofield Institute fires off a list of considerations: Cost, weight, uniform height and width, the quality of the urethanes used in manufacturing, the manufacturer’s reputation, recommendations from other contractors, and samples of completed work.

A good stamp is defined by character of texture, says Kaitanjian of Matcrete. It should come as close as possible to replicating the look and feel of actual slate or stone.

Johnson’s company, Solomon Colors, makes oversize stamps, longer than they are wide. Johnson says they support more weight and are easier to pick up than a smaller, squarish mat. Bigger mats also mean less bend-downs by workers and fewer push-ups on the concrete.

But Carlton, for his part, is not enthusiastic about bigger mats. More square footage means more weight per lift, he says, which can make a day’s worth of stamping pretty tough. “I haven’t seen bigger patterns cut down on time that much.”

Still, there is one concept that nobody disputes: One of the most crucial factors in buying mats is quantity. “Everybody knows the secret of collecting is to have plenty of stamps,” Carlton says.

Care and cleaning
While mat maintenance is important, it’s not exactly the hardest part of stamping. “I’ve got to tell you I’ve never destroyed a mat,” Carlton says. “We have yet to ever just wear them out.”

“It’s not uncommon for stamps to last indefinitely, 10 or 15 years, if they’re taken care of,” Harris says.

And even a torn stamp can be used as a finesse tool. “You can get so much out of a stamp if you cut it up and use it to your advantage,” Johnson says. Stamps can be cut in half and used on wall edges or stairs, he says. In fact, he often tells contractors that if they haven’t carved up one mat in a set, they’re not using the set correctly. “In the long run, the cost of one stamp will save you more than that in labor.” 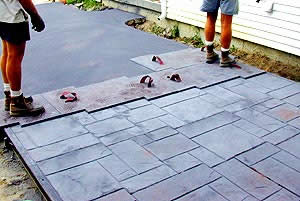 The mats should be stored flat, stacked square on top of each other. If possible, each set of stamps ought to have its own pile.

And it helps to store them indoors — the sun can deteriorate some stamps, particularly the handles, Johnson says. When mats are left outside, they should be flipped over to protect the handles from sunlight, recommends Carlton.

Mats can be cleaned with a broom, soapy water or a pressure washer. Carlton admits he’s reluctant to use any moisture on a mat. “A stiff brush with a little elbow grease will go a long way,” he says.

Contractors should also be careful when using liquid releases, warns Kaitanjian — some can eat away at the compound that makes up a stamp.

Stamp explosion!
For newcomers to the stamping craft, a good place to start is with mats that imprint texture instead of joints or shapes.
Harris of Scofield recommends setting up a 20-foot-by-20-foot sandbox with wet, compact sand and learning how to use mats there. Also, he says, formal training is a must. 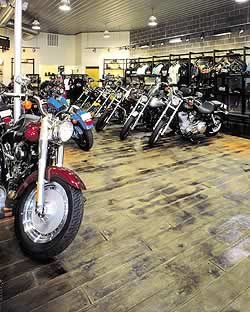 As for the future of stamping, Kaitanjian of Matcrete says the market is trending toward less busy patterns and bigger-looking stones and tiles. There is also a growing market for stamps in overlay work, he says.

While custom patterns typically come into play when imprinting specialized designs, such as a candy bar for a chocolate factory or a name and logo for a university, contractors have also been known to order more general designs like starfish or seashells.

However, custom stamps cost considerably more and bring a lot of unknowns to a job, both in terms of performance and time spent perfecting the mold. “It’s not for everyone,” Kaitanjian says. “It’s up to me and my competitors to break new innovations.”

And anyway, Carlton says, who needs to make their own tools these days? “There’s been such an explosion in the decorative industry that there’s everything out there a guy needs,” he says. “It’s all out there now. It’s a good time to be in this business.” 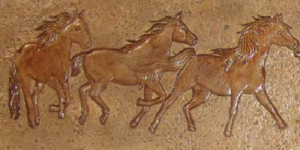 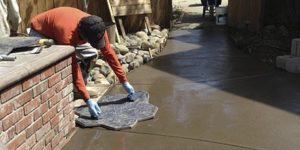 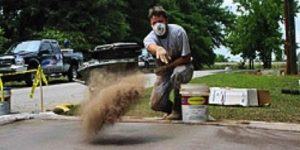