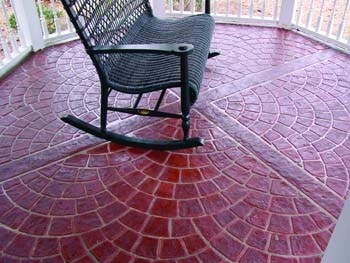 Does a client have a limited budget? A stamped overlay might be a cost-effective solution when Italian marble isn’t an option. “Overlays offer the advantage of near infinite color and design, oftentimes at a fraction of the cost of alternative installations of stone, granite, marble and slate,” observes Mike Duarte, technical director at Versatile Building Products in Carson, Calif.

Need to enlarge a patio or refinish a concrete floor without removing the existing slab? Overlays make it possible. Clark Branum, area manager for Seattle-based Rafco Products-Brickform, reports, “A lot of times overlays will be used in remodel or retrofit situations, so you can achieve color and texture without using traditional materials such as concrete or stone or tile.”

For versatility, overlays are winning a growing number of fans. “You can do overlays anywhere: inside on the 15th floor as well as outside… and you don’t have to worry about concrete trucks,” says Janine Lutz, chief operating officer of SuperStone Inc. in Miami.

Contractors who are familiar with stamping concrete should be able to make the transition to stamping overlays pretty easily. Many of the tools are the same, or similar, and a few slight modifications in technique can be mastered with a little practice. 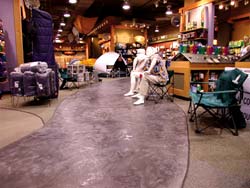 You may not need new tools
If you already have an inventory of stamps and texture skins, you may not have to buy more to begin stamping overlays. 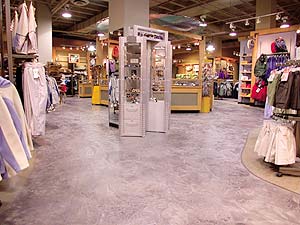 One of the general rules is that the depth of the texturing tool should never exceed the depth of your overlay, Branum says, adding, “It sounds pretty basic, but you’d be surprised how often it happens!” Random stone and flagstone patterns are generally more aggressive and have deeper relief than slate or seamless texture skins, he says.

Also, make sure you have enough stamps or mats for the job. Jim Rowe, a Denver-based regional sales manager with Miracote, says, “It’s a general rule of stamps to have enough to go across and halfway back. If you don’t have enough it’s almost impossible to keep your pattern aligned.”

Tools for cleaning up the joints and grout lines are the same as for concrete. S-tools, pizza-cutter style tools and chisels can all be used. Mat suppliers often have tools that match a specific pattern. Some contractors have tools they fashion themselves. Duarte says his favorite is a set of box-end and open-end wrenches that allow variation in joint size selection. 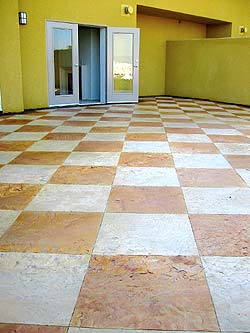 Know your product
When applying overlays, it is important to familiarize yourself with the product you are using. Products from different manufacturers act differently, so cure times and working times will vary from product to product.

“One difference depends on the polymer modification — some speed up [the cure time], some slow it down. Check with the manufacturer,” recommends Marshall Hoskins, sales and technical representative for Specialty Concrete Products Inc. in Columbia, S.C.

“What’s easier than working with regular concrete is that the cure rate of overlays is much more predictable,” Hoskins adds. “With concrete, every pour is different.”

Contractors familiar with overlays agree that temperature greatly affects set time and the window of workability with these systems. Check with the overlay manufacturer for specifics regarding minimum, maximum and optimal temperature ranges.

Temperature is not the only consideration when timing a project. Another largely overlooked problem occurs during stamping operations in windy conditions, when air circulation over the mortar accelerates evaporation. This can lead to small unsightly shrinkage cracks on the surface of the mortar, resulting from shrinkage variation in the surface and sub-surface layers, Duarte says. 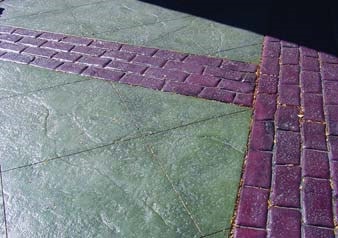 For outdoor projects, you might want to wait until conditions are more favorable. For indoor projects, some contractors recommend turning off air conditioning, heating and ceiling fans, which all increase air circulation. Most will agree that the normal stamping window — in optimum conditions — is about the same as concrete, but the timing is important.

“If you stamp too soon, it might be susceptible to shrinkage,” observes Rowe. “You wait too long and you’re past your window and have a tough time getting the impression.”

Many contractors use the finger test to be sure the time is right. Push your finger tip into the surface of the material and wiggle it side to side. If the overlay doesn’t stick to your finger, it’s ready to go. 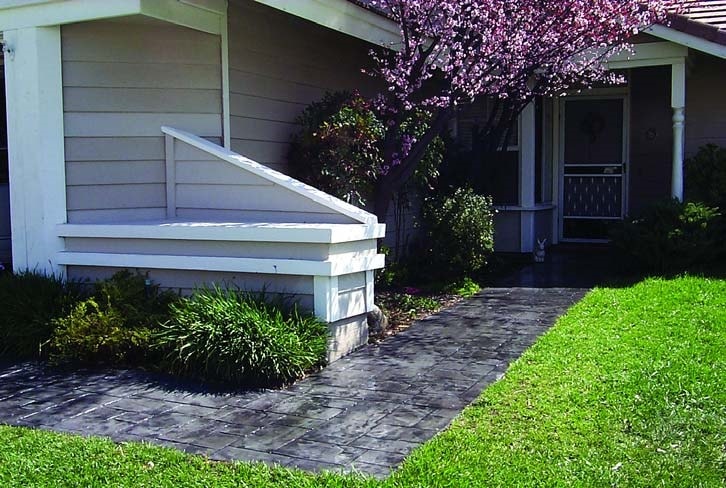 The surface should offer some resistance, but not be hard, Branum says. “It should still be pliable to accept a texture.”

Stamping overlays is often easier than regular concrete, Hoskins says, “because the depth of the overlay gives you less chance for an uneven stamp if it’s too wet.” The smaller aggregate used in overlay systems is a plus, he explains, because it molds easier. “There’s no large aggregate to shift around and cause surface cracks.”

Mark Donaldson, director of operations for Skookum Floors USA in Seattle, reports that his crew often just walks on the mats to add the necessary weight, rather than using tamping tools. “The material is not as tough or hard as standard concrete during the stamp process,” he says. 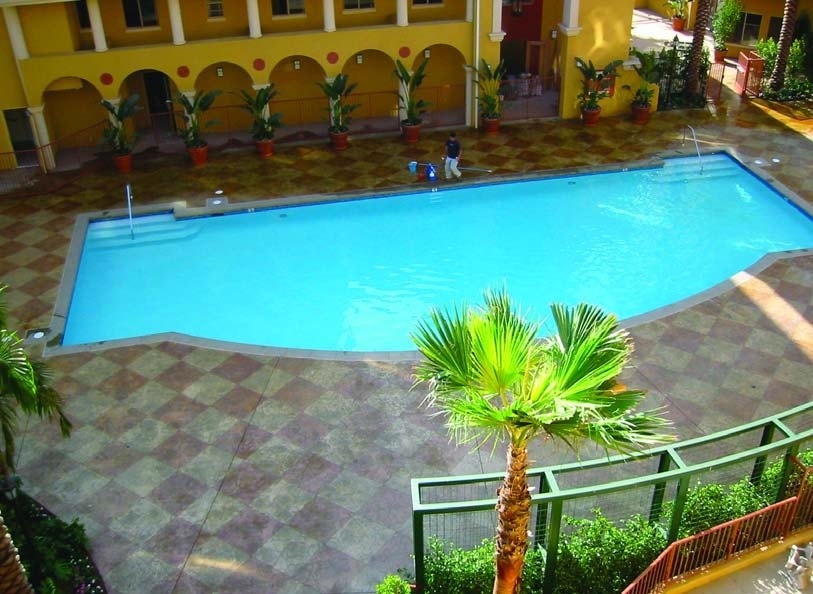 Consider cleanup when choosing a release
Though both powder and liquid releases work well for stamping overlays, you might let the job determine which release you use.

“Releases are the same as for concrete,” Donaldson says, adding that it’s important to keep in mind that the wash-down stage is not always easy in an interior setting. “We prefer liquid releases and silica sand which are easy to clean and remove their residue.” 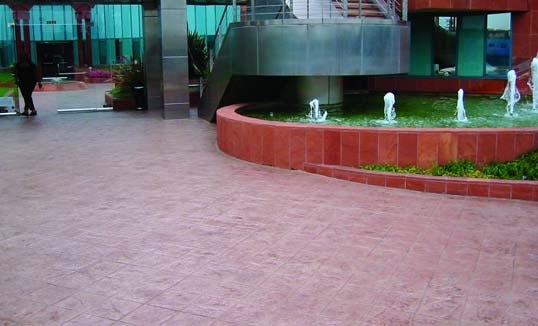 The desired aesthetic appearance may also play a role in your decision, Duarte suggests. Liquid releases are typically clear solutions that impart no color during the imprinting process, although many contractors do use the liquid release as a vehicle to mix and spray powdered pigments to achieve a washed-down antiqued effect. Powdered releases impregnate the mortar surface with color, offering greater color saturation and uniformity.

But Duarte cautions: “It is important that a contractor test their respective liquid release agent with their stamping mats to ensure that the release agent will not cause the mats to swell.”

So, in an outdoor application where thorough rinsing and scrubbing is not a problem, a powder release might work best. Indoors — and in applications where an adjacent wall could be stained — a liquid release might be better suited. 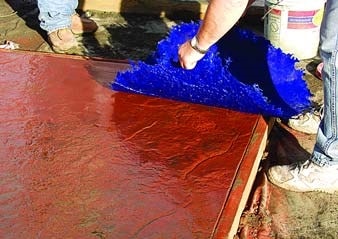 Develop some finesse
Removing a stamp from overlay material requires a special technique.

“Removing the mats requires more skill than standard concrete because the topping material may want to stick to the mat or pull off the floor,” Donaldson observes. “It’s also more likely to clump or bulge if the mat is dragged along the floor.”

Hoskins advises, “Don’t just pull it up by the handles — you’ll get too much suction. Reach down and grab a corner and roll the corner up — peeling it — to release any suction.” You may only have to roll up one edge, or you may have to roll up two. Just take it easy, he says.

Luckily, “overlays are user friendly,” reports Rowe. “You can pour when you want and how much you want because you mix it as you go.” But don’t neglect to plan your job, he says. “Where will you start pouring? Where you start pouring is where you’ll start stamping.” 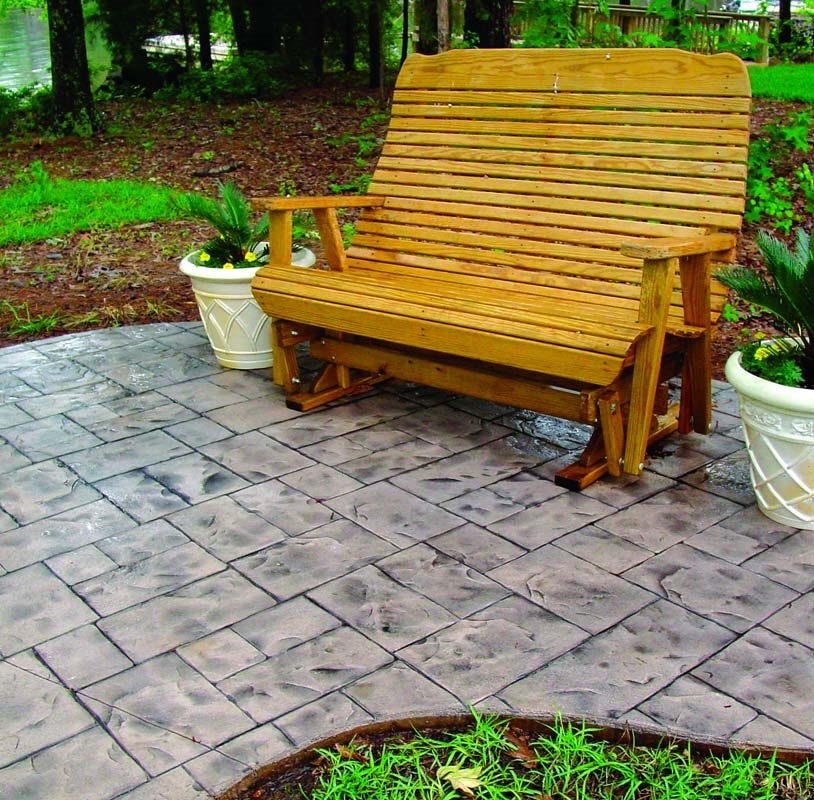 Also know how much you can tackle at one time. “The size of the area you work depends on how many workers you have,” Lutz says. For example, she says, “three people could do about 1,000 square feet at once, if you have good weather and experienced workers.”

When it comes down to it, however, the final results rely in large part on a good foundation. Overlays may have greater flexural strength than concrete, but underlying control joints must be honored. And experts agree that the most important step is substrate preparation. After all, the strength of an overlay is in the chemical bond it has with a sound substrate. Be sure to clean, profile and prep the concrete substrate correctly. As Branum succinctly says, “Poor prep means overlay failure — it guarantees it.” 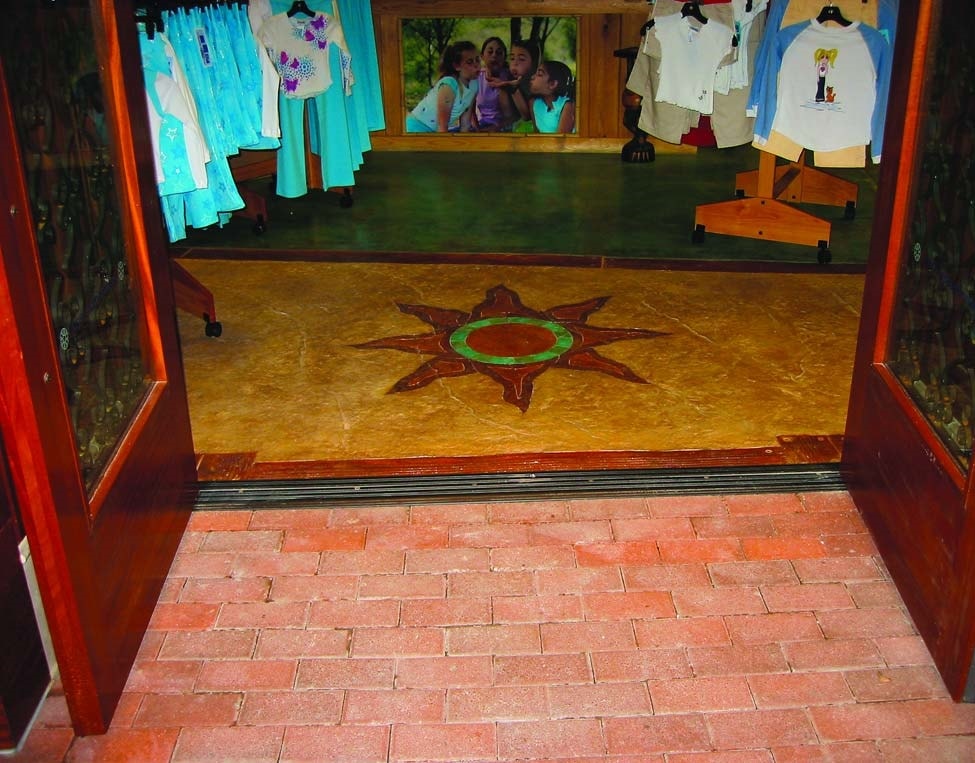 Donaldson advises tackling a textured skin first. “This will develop your skills in stamping and is an easy pattern to fix and repair mistakes,” he says. “Once you feel comfortable with the stamping technique, try a random stone.” The most difficult patterns are fan patterns and straight tile patterns, he says.

Duarte recommends that beginners get off on the right foot by attending a hands-on training seminar with a quality manufacturer, and start with small jobs when they are ready to gain field experience.