Northern California’s scenic coastline has drawn many local teenagers to a life of surfing and adventure, and Tom Ralston was no exception. His father, however, had different ideas for his future.

“When I started surfing,” Ralston says, “my father said he wasn’t going to have a beach bum living at his house.” That was the summer of 1964… almost 40 years ago.

Consequently, Ralston learned the concrete trade, working beside his dad on driveways, curbs and gutters, sidewalks, and small foundations. “Every once in a while I would get to jackhammer concrete with a big 90-pound jackhammer. As a boy I was really short, so that thing was about as high as I was.”

But as a third generation concrete contractor (his grandfather, Wilbur Thomas Ralston, started the business in 1928), Ralston harbored the idea of quitting the business altogether. “I was sick and tired of the same mundane concrete,” he says. “If it wasn’t for decorative concrete I wouldn’t be in the industry today.”

Ralston took over the company when his father retired in 1989. “My father had actually retired in 1987 and the business was almost dormant — until I was asked to do a decorative project for a Victorian restoration project that had some cool concrete work,” he says. He put a small three-man team together and finished the project — and found a particular thrill from building a team and doing creative concrete on his own. 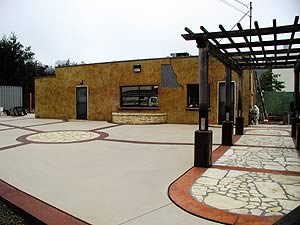 “We are involved in many divisions of concrete and masonry, and it allows us to create a unique blending of hardscape surfaces,” Ralston says.

Many creative innovations have helped set his company apart from the rest. For example, he was asked to repair a wall that was a favorite spot for skateboarders who used it to practice their jumping and “railing” techniques. Ralston created a mold of a seashell, cast a series of replicas with Ardex polymer concrete, coated them with a copper-laden epoxy and then attached them to the wall with rebar. The wall’s straight edge was now gone, and the disgruntled skateboarders moved on. 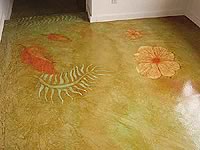 Another project that pushed the creative envelope was the re-creation of an ocean-like setting within an entire home interior. Interior concrete walls were constructed to look like cliffs with natural fissures, and multiple blendings of acid-stained concrete that incorporated beach glass, sea shells and aquarium sand were used on the floors, along with sandblasting and stenciling. Many of the surfaces were juxtaposed with stainless steel, exotic hardwood and stucco, creating dramatic results. The project caused a stir among locals who visited the home and has also been featured in more than a half dozen magazines and newspapers.

On another project, Ralston got into a swimming pool with a group of plasterers and had his helper hand him buckets of various color hardeners so that he could throw and mix them into the white plaster mix. “After about an hour of that those plaster guys wanted to kill me,” Ralston says, but he finally convinced them, in his best Spanish, that the owner wouldn’t pay anyone unless he was able to make the swimming pool look like an ocean tide pool. They allowed him to continue and the results were applauded. 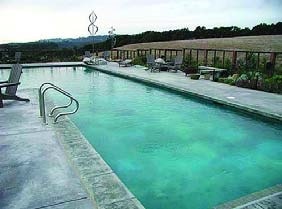 Ralston uses a myriad of different coloring systems, including dust-on colors, acid and acrylic stains, and universal tints, as well as colors from a multitude of different manufacturers. “On certain projects we have gone to art stores and bought tubes of acrylic paint, mixed them, and used them with sea sponges to go onto floors,” he says. “Then we sealed them with a good polyurethane.” On one project, Ralston ran out of black color and used shoe polish. “That was six years ago and it is still black.”

He has been creative behind the scenes as well,where he and his office staff have developed a software package called Job Manager. “This software allows the entry of literally thousands of detail items,” he explains. “We may have a house that has a driveway with bands that are Oyster White with Antique Amber acid stain, and the panels are Victorian Swirl finish with a Sandstone color hardener.” 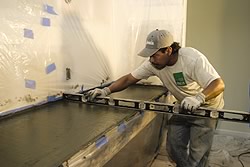 All this data can be entered into the program, and with one click of the button a bid is created. “Although the program was expensive and took some time to develop in-house, it has brought a huge benefit to TRC,” he says. “For example, we can track pours, and mix designs, record client conversations, check payment schedules, and more. It even has a place to record the temperature of the concrete and note what the weather was like on the day of the pour. We constantly feed it with information to help us grow our business intelligently.” The software was a $60,000 investment.

Ralston believes that most people working in the decorative concrete industry are pioneers. “You can become very creative out of necessity when you have $15,000 or $20,000 on the line,” he says.

Recently, while working on a thin-top overlay, the wind started blowing bits of bark onto the site. “The pieces didn’t really reveal themselves until we poured the Ardex. Because the bark was much lighter than the Ardex, they began to float to the surface. With Ardex we only have about twenty minutes and after that you are done.”

The crew had to get on their hands and knees to fish out all the bits of bark. “The longer you wait, the harder it gets. Trowel marks will remain and the product refuses to self level,” Ralston says. “We had one area that had all of these trowel lines. The next day we went in and cut score lines every two feet on center. After, we sanded the trowel lines that were most noticeable, and made it look like a pattern that was designed in the entry.” In the decorative industry, one needs to be inventive out of necessity, he says, adding that “many a project gone awry has prompted us to restore it with a creative effort.” 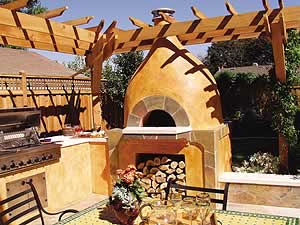 In early 1992, after listening to a weatherman say that there were possible light showers in the late afternoon north and 75 miles away, Ralston poured four driveways in a subdivision only to get hammered by driving rains shortly after 10:30 a.m. “We shortly thereafter became ‘experts in polymer overlays’” Ralston says with a grin, “and even pulled in a bit of profit on the job.”

When you’re working with as fickle a medium as concrete, you always have to prepare for the unexpected, he says, especially when you consider the variables of inaccurate concrete batches, admixtures, acid stains that don’t promote a good color, or concrete color batches from a ready mix plant that vary from one batch to the next. So how does a contractor minimize these issues? 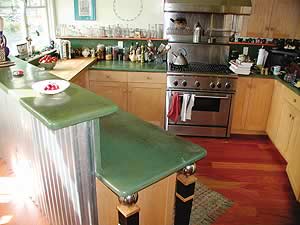 Take notes while on the job, he says, so that when problems arise there’s a database of information that can be referenced. He is a strong advocate of keeping an eye on details, holding weekly meetings with his lead employees.

He also sends his lead workers to outside seminars as often as possible. Ralston himself has been teaching at decorative concrete training seminars for nearly 10 years. He speaks at industry conferences for the Decorative Concrete Council (and serves on the board) and spoke this year at the World of Concrete on concrete countertops and acid staining. He has recently teamed up with countertop manufacturer Buddy Rhodes of San Francisco to do training seminars for concrete countertops. 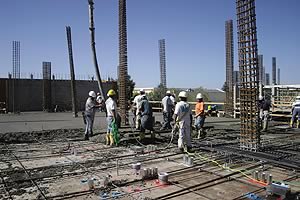 Managing 52 employees in various divisions provides a unique challenge, he says. To have a successful team, you must have people who can bring both talent and work ethic to the job. “Without work ethic, they aren’t going to bring the project to the level we expect,” he says. “Without talent or experience, they can’t pull it off because they aren’t at that level yet.”

Over the last fifteen years, he has seen lots of turnover because employees just didn’t fit into the company culture. “They either didn’t have the work ethic, talent, or the temperament, so they didn’t last here. We try to promote our culture as being cooperative and respectful, but we drive hard too. It’s the nature of the beast, and concrete doesn’t wait for anyone.”

Positive values, friendly service and quality work are the cornerstones of the company.

“It is so easy to make an ordinary job extraordinary,” Ralston says. 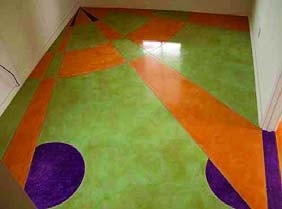 “Just add some decorative deep joints or round a step … there are hundreds of things you can do for little or no extra cost and clients will love you for it.”

But operating a decorative concrete company and trying to be on the cutting edge is tricky, he says. “Our ultimate goal is to put a smile on our clients’ face, but we have had to learn the hard way that the flip side of this goal is to be profitable at the same time. So many decorative projects can easily run over budget. There are a lot of starving artists out there — and we really don’t want to be one of them.”