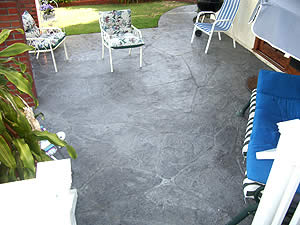 When Chris McMahon sets out to rehabilitate a worn-out pool deck, he’s not satisfied with merely jazzing up the old slab. He likes to reinvent the entire swimming pool environment, using color, texture and elevation.

“We’re known for our imagination, and a lot of times our imagination involves removal and replacement of portions of the deck to change the overall appearance of the pool,” says McMahon, president of Architectural Concrete Design in Levittown, Pa., which does some 500 pool jobs a year. One of McMahon’s current commercial jobs involves putting a “beach entry” into a pool, in which a gradually sloping deck will descend into the water. The deck will resemble rippled, wind-blown sand. “We’re pouring new concrete and imprinting it with sort of a rippled texture, and then we’ll sandblast it and put a sand-rich mix of concrete over it,” McMahon says.

Whether the job calls for a sweeping overhaul a la Chris McMahon or simply a tinted overlay that adds some splash to a dull deck, decorative concrete has become a standard feature in swimming pool makeovers. 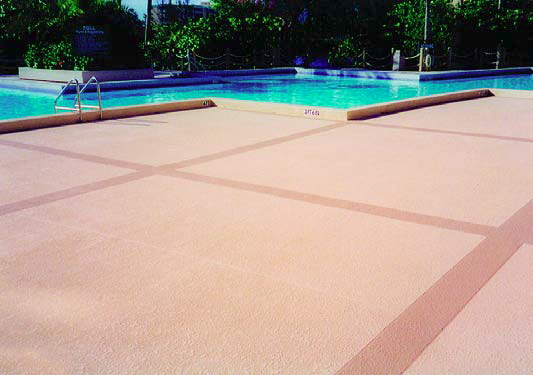 Common coatings
In recent years, the two perennial favorites in concrete decking, spraydeck and kooldeck, have been joined at poolside by the new generation of stamped overlay systems. Stamped systems offer a vast array of looks, from tile to stone to brick. Spraydeck and kooldeck, on the other hand, offer skid resistance and cool-on-the-feet surfaces that are hard to beat. Sometimes the old and the new coexist side-by-side, with spraydeck or kooldeck put closest to the water while stamped flatwork holds down the outfield. 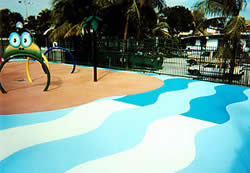 Spraydeck is a generic term for a wide variety of acrylic- or polymer-modified cementitious coatings that bond well to cured concrete. They typically get a knockdown finish, which results in a skid-resistant surface that won’t fry your toes. A common alternative is the orange-peel finish, in which the coating is sprayed on and left as is, untroweled. Either finish can be modified as the coating is sprayed in place by altering the amount of air shooting through the hopper. More air results in smaller particles and a finer texture, while less air results in clumpier particles and a coarser texture. Spraydeck can also be rough toweled rather than sprayed on, which makes it suitable for light stamping, hand carving or texturing with a skin.

Kooldeck is the generic term for skid-resistant, cool-surfaced coatings consisting largely of portland cement and marble dust, with no binders. Kooldeck is most often used in new construction, as a green-on-green overlay, but it can be used on older substrates with a bonding coat. The same spray-on textures attainable with spraydeck apply to kooldeck. 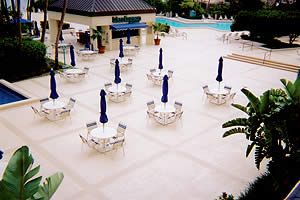 Sometimes a pool deck rehab calls for a tear-out of the existing deck. But often an overlay will do. As with every overlay, preparation of the substrate is critical. “It doesn’t matter if you’re doing a pool deck, a driveway or your kitchen floor, surface preparation is the key to any decorative concrete overlay,” says Jim Morgan, president of Texas-based Golden Look International. “There are more failures in decorative concrete overlayment due to poor surface preparation than to anything else.”

Methods of substrate prep run the gamut of chemical, mechanical and abrasion techniques. Some contractors swear by acid etching, while others rely on diamond grinding, while still others prefer shot blasting or sand blasting. And some, such as south Florida contractor Austin Parker, owner of Tropic Surfaces, have found that a thorough pressure washing will often do the trick, so long as the cementitious substrate doesn’t have paint or oil on it. “I do millions of square feet of decking a year, and I’ve never had a warranty issue,” Parker says.

Morgan prefers acid etching. But instead of the muriatic acid solution that is most commonly used, he likes to use an acid gel. “It looks just like shaving gel,” he says. “I like it because it gives a consistent etch across the entire surface, and it doesn’t brown out the landscape or burn the flowers. You can wash it off without neutralizing it first. With muriatic acid you need to come back and neutralize it first with baking soda or vinegar.”

Tom Pennington, production manager for Renew-Crete, in Orlando, Fla., likes to combine sand blasting with acid etching. “Generally I do both, just as a precaution for myself, because the worst thing that could happen is delamination,” he says. “Acid etching makes for a good, porous surface, but it doesn’t do well at removing a previous surface like mechanical or abrasion techniques do.” 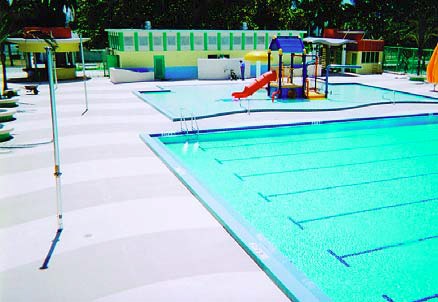 Dealing with cracks
Proper prep also involves the removal of spalling, leveling any depressions with a mortar coat and addressing cracks.

Fixable cracks are typically opened with a diamond-blade crack chaser, then filled with a flexible joint compound and broadcast with silica to give the surface some grab. If the crack is moving, a control joint should be cut nearby, or better yet, the section of concrete can be cut out altogether and replaced. McMahon, who has to contend with Pennsylvania’s harsh winters, has a zero-tolerance policy for all cracks. “We just cut them out and replace the section of the deck,” he says. “We have so much freeze-thaw here that with all the lifting and dropping, any crack you tried to bridge will come back.”

One creative way to deal with cracking substrates is to incorporate the cracks into the final pattern of the deck, allowing them to serve as their own control joints. “You let them exist where Mother Nature says they should be and make them part of the design,” Meursing says. After coating the deck, reopen the cracks with a crack chaser, then continue the cut to make a flagstone pattern. Stencils can also be used to achieve flagstone patterns, as well as brick patterns, fan patterns and a wide array of other looks. Templates can be used, or grout lines can be taped by hand. Parker uses strapping tape to create a variety of grout-line patterns, such as diamonds and stars. He prefers to lay his own lines because it gives him more control over his designs. “A lot of times a living room opens right out on the pool deck, and you want to match the deck pattern to what’s going on inside the house so that when you look out the sliding glass door you see a continuous flow,” he says.

Often Parker uses different integrally colored mixes of concrete to alternate colors between shapes within a pattern. Sometimes he mixes colors within a shape. “I’ll have three hopper guns going at one time, all with a different color,” he says. “Maybe one color will be terra-cotta, and that fills 70 percent of the square. The second gun will have maybe a lighter terra-cotta, and that’s spraying about 20 percent, and then maybe 10 percent will be a light tan color. You get sort of a mottled look. It looks nice.” 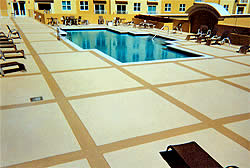 Coping with coping
Overlayments are usually feathered up to the edge of the pool’s coping, leaving the coping itself uncoated. On cantilevered decks, overlays generally wrap right around the overhang. Many contractors tape a grout line eight inches or so from the end of the deck and leave a smooth edge where people can sit.

Sealing the deck
The use of sealers is critical for ensuring long life for any decorative concrete. Morgan recommends using three coats of sealer on pool decks — two tinted coats and one clear coat for uncolored concrete, and three clear coats for integrally colored concrete. Resealing every one to two years is essential, he says. “You can tell it’s time to reseal when you start to see splotchiness,” he says. “It will start to look dull in some areas. Water will run off easier where the sealer’s left, and it will soak in where it’s worn off.” 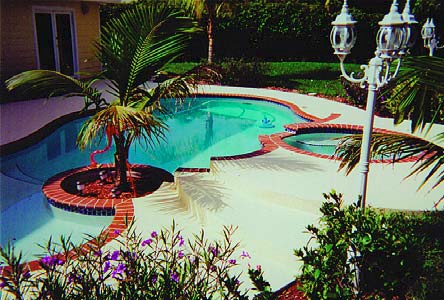 Combinations of colored sealers can be used for creative effects. Grout lines, for instance, can be achieved using a colored sealer applied with a ketchup bottle and toothbrush, says Alex Metrovich of Innovative Concrete Technology.

Unfortunately, sealers have a tendency to slicken concrete surfaces. But non-skid admixtures can offset the problem. “If you don’t incorporate a non-skid into the sealer, you can have a beautiful job but a very slippery surface,” Metrovich says. “Unless you have a very good knockdown finish, I would recommend a non-skid as a safeguard. It’s a cheap insurance policy.”