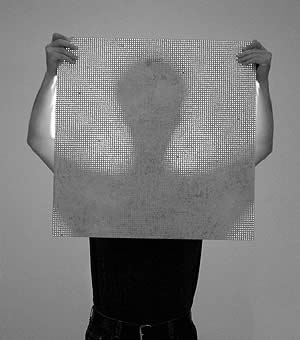 The model posed next to a solid stack of seemingly ordinary concrete blocks. In a typical “now you see her, now you don’t” fashion, she stepped behind the wall. To the audience’s amazement, she didn’t disappear from sight. Was this a case where the sand (cement, water and aggregate) was quicker than the eye?

Hardly. It was but one example of the remarkable types of concrete on display at an exhibit organized by the National Building Museum in downtown Washington, D.C. Called Liquid Stone: New Architecture in Concrete, the exhibit features innovations that range from translucent blocks and photoengraved building fronts to revolutionary materials that promise to change the rules of construction as we know them today.

Oh, I see
We all know that concrete can be concocted to look like many things, but who would have thought that the rock-solid substance could be a substitute for a window? As it turns out, a handful of academic and commercial researchers are not just dreaming of this, they’re busy making it happen.

The product that seems to have captured the most attention is LiTraCon, an acronym for “light transmitting concrete.” Invented in 2001 by Hungarian architect Áron Losonczi, the translucent concrete block is being manufactured by the German company LiTraCon and should be on the market by the end of this year. 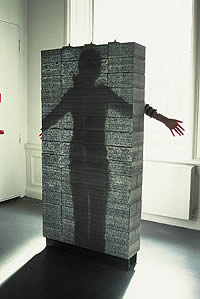 “Besides the aesthetic appeal, there are practical uses,” says G. Martin Moeller Jr., senior vice president of special projects for the National Building Museum. LiTraCon has structural capabilities and could be used in an area of a building where you want natural light to come through, such as a fire escape stairwell. In an emergency situation where power is lost, the blocks would allow light to pass through and you could find your way down the staircase.

LiTraCon consists of randomly embedded glass fibers in a proprietary concrete mixture. Because of the inherent characteristic of fiber optics, light doesn’t diminish over the thickness of the material. “You could have a wall that’s 20-foot thick and light would still pass through,” Moeller says.

Another product on display features plastic fibers arranged in a perfect grid. Pixel Panels, developed by Bill Price of the University of Houston, also transmit light from one face of a wall to another, but in more of a pattern. Light that shines through the panels resembles thousands of tiny stars in a night sky. The self-supporting panels, which were largely designed for nonstructural walls, are currently available through special arrangements.

Will Wittig of the University of Detroit-Mercy also developed a process to produce translucent panels. Made of Portland cement and sand, and reinforced with a small amount of chopped fiberglass, his panels are 1/10-inch thick at their centers — thin enough to be translucent under direct light.

“It’s a true concrete,” Moeller says, “made without using additives or resin. Will developed a formula for concrete that would still maintain its strength but could be made very thin. You can see light through these panels in much the same way you can see light through thinly sliced stone.” The experimental material, which is designed to be used as a decorative element, is not yet available commercially. 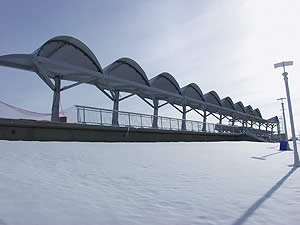 Besides concrete you can see through, there’s concrete that can capture that Kodak moment and immortalize it. “Photoengraved concrete is made by a process similar to silk screening,” Moeller explains, adding that the technique was developed in France.

A placard at the exhibit explains it best: “A photograph is screen-printed as a layer of tiny dots onto a polystyrene sheet, but instead of paint or ink, the image is printed with a cure retarder — a chemical that slows the cure rate of concrete. The photosensitive sheet is then placed into a concrete mold and the concrete is poured on top of it. After the concrete sets, it is removed from the mold and pressure-washed, revealing a half-tone-like image.”

“This system of photo engraving, called serilith, has been around for some 10 years or so,” Moeller says, “but it hasn’t really caught on.”

Incredibly strong, incredibly thin, self-reinforced
That’s not the case with Ductal, a product that its maker, Lafarge, predicts will catch on like wildfire. Described as an ultra-high-performance concrete, it contains extremely strong fibers that, in effect, make the material self-reinforcing.

“Because of the strength of the fibers in the concrete mix, it hardens to form a strong and durable material while at the same time maintaining its ductility (flexibility). It has a little bit more of a give and is less brittle than typical concrete,” says Moeller.

“Its surface is very dense, which makes it more resistant to weathering and staining. And it’s so incredibly strong that it can be used in long-span structures without requiring steel reinforcement.”

Furthermore, the revolutionary new material also can be used to create very thin structural members. For instance, the concrete in the arches at the Shawnessy Light Rail Transit station in Calgary, Canada, each of which spans about 20 feet, is only 3/4-inch thick. 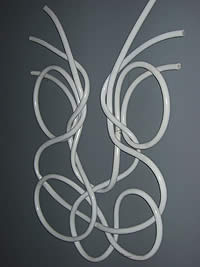 What’ll they think of next?
Ductal isn’t the only thing going on at Lafarge. Agilia, also shown at the exhibit, is touted to be a self-consolidating concrete comprised of a special formula that includes a “superplasticizer.” This additive keeps the mix exceptionally fluid during the pouring process without compromising the material’s strength. It requires no vibration and can be used for difficult or constrained pours. Its makeup also allows for unusually fine surface texture.

To help keep surfaces pristine, there is an interesting product recently used by Richard Meier, an architect famous for his gleamingly white buildings. Commissioned by the Vatican to celebrate the 2,000th anniversary of Christianity, he recently completed the Jubilee Church in Rome. To ensure that the church would not become discolored, he worked with a company in Italy called Italcementi, which developed a brilliantly white cement incorporating photocatalytic particles.

“This product is designed to neutralize the acid in the air, to eat the pollution and still remain white,” Moeller says. “The material has been around awhile but the company reworked it. It’ll be interesting to see how well it holds up.”

Another environmentally friendly product on display is Syndecrete, a precast, lightweight concrete free of resins and other toxic substances. Developed by architect David Hertz and available in a wide range of colors and specific mixes, it contains natural minerals and a wide variety of recycled materials, ranging from metal shavings to scrap wood chips. 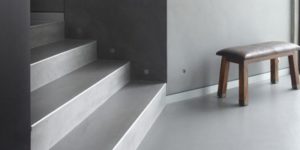 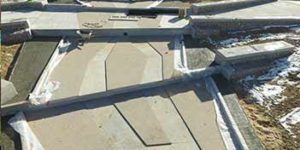