Julio A. Hallack drives his wife crazy when he travels, because he always seems to have his head down. No, he’s not embarrassed to be seen with her. He’s just studying the floors. 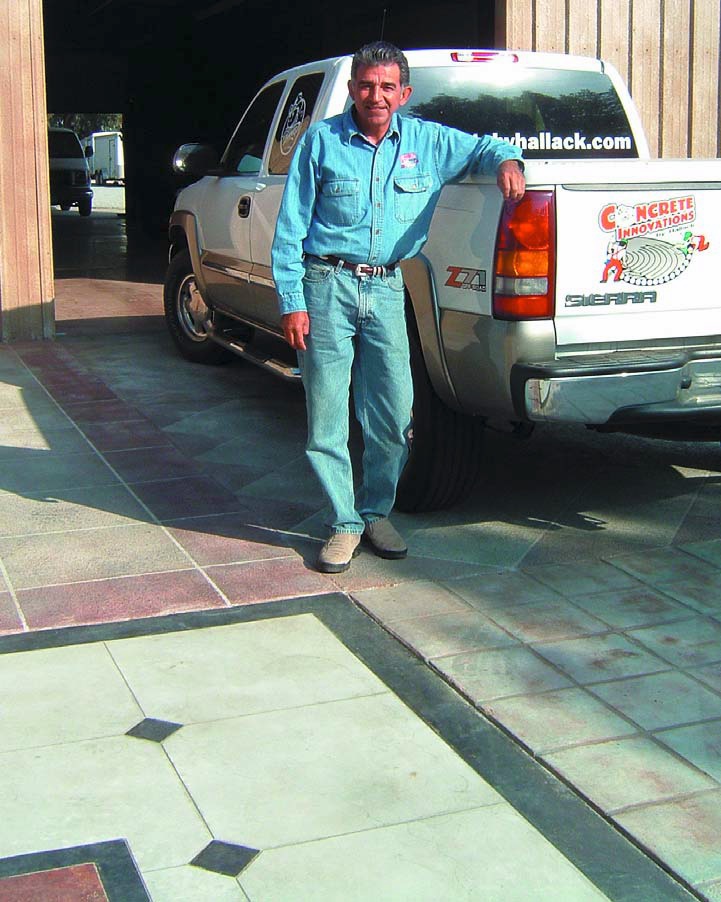 As the owner of Concrete Innovations by Hallack, a small company that specializes in restoring concrete floors, he is a dedicated student of what’s underfoot.

“My wife says I have a problem because I’m always staring at the floor,” says Hallack. “But that helps me make decisions on what I think is going to look good because I’ve already seen it done by other professionals in the industry.”

Based in the California farming community of Turlock, Hallack was one of the first contractors in the state’s vast Central Valley to do decorative concrete work. It wasn’t the easiest sell back in 1991, when he got started, but Hallack loved it and stuck with it.

“I was like the Lone Ranger pushing a product that many people had a hard time buying,” he says. “And the ones who were buying it were bringing in contractors from out of the area with big portfolios.”

Hallack’s perseverance paid off as decorative concrete began to catch on through the 1990s. Now he travels throughout the Central Valley, working on jobs that have included rehabilitating the floors in a

California supermarket chain (using acid stains), recreating the labyrinth of Chartres Cathedral (a gothic, paved stone floor that he reproduced in concrete on a private estate), and restoring a 1934 terrazzo floor in an old art deco movie theater (part of the larger renovation of the State Theater in Modesto, Calif.).

About 80 percent of his business is floor restoration, though he also creates new floors and concrete countertops. Chemical staining is one of the main tools in his bag of tricks, along with overlays and stamping materials. He’s a real fan of his two primary product manufacturers: L. M. Scofield Co. and Miracote.

Designing the job
Before starting a project, Hallack insists on involving his clients in developing a design, even when they’d prefer to leave it entirely up to him.

“I think the client should always be involved, because they become more appreciative at the end of the project,” he says. “And it takes the weight off of me.”

In developing a design, Hallack shows his clients lots of photographs, both from his portfolio and from magazines. He also encourages them visit his warehouse, which doubles as a showroom with 7,000 square feet of both indoor and outdoor decorative concrete on display.

Hallack believes that colors should be chosen with careful regard for their surroundings.

If a residence already has slate floors indoors, for instance, Hallack might draw from the slate’s palette of blues, greens and terra cottas for the patio’s color scheme. Lighter shades might be appropriate to reduce heat retention outdoors, but the indoor and the outdoor surfaces will still tie together, he says.

Likewise, if the house has a red roof, Hallack might broadcast some red dry-shake color onto the concrete to tie the new floor in with the roof. “Paying attention to detail like that is one of the ways that I try to be different from my competitors,” he says.

You can see Hallack’s attention to detail in the hand-engraved designs he’s known for. “I started doing sandblasting in the early 90s when everybody was hot for sandblasting, but I thought it looked kind of boring and I didn’t like the mess,” he says. “So I started doing my own engraving by hand.”

He uses a Makita grinder for the bold lines, and specialty tools for fine details such eyes, leaves and feathers. He typically acid stains individual sections of the engraving with various colors and then fills the borders with colored tile grout.

Hallack helped remodel the Central Valley’s chain of homegrown grocery stores, Save Mart Supermarkets and S-Mart Food, redoing the floors and hand-engraving welcome messages at the entrances, with designs customized for each store.

When he restored the concrete floor in the lobby of a local beverage distributor, he capped off the job with a hand engraving of the Anheuser-Busch eagle logo — an eight-foot by eight-foot screaming bird set atop the letter ‘A.’ “It’s one of my masterpieces,” he says.

The path into concrete
Hallack, 50, was born and raised in Mexico. He came to California in 1973 as an exchange student studying international marketing at the University of the Pacific. Upon graduating, he got a job as the South American representative for a U.S. farm equipment firm, then took a job as a customer service manager for a western boot manufacturer in El Paso. Along the way he got married, and in 1986 he and his wife moved to the Central Valley so she could be closer to her family.

The move left Hallack unemployed and uncertain of his next move. But that changed one day while he was at a gas station filling his tank. A landscaper pulled up next to him in a truck filled with lawnmowers. Hallack asked how landscaping paid, and the guy said he earned $4,000 a week, which got Hallack’s attention. The guy also offered Hallack work on a big job in a good neighborhood. Hallack took it.

“While I was doing this job,” Hallack says, “somebody came by who was building a house and said, ‘Hey, I’m looking for a landscaper,’ and I said, ‘I’m your man.’”

Suddenly Hallack had his own landscaping company, which he turned into a profitable business.He found his way to concrete indirectly. Occasionally he hired subcontractors to build retaining walls, walkways and whatnot, but he was never satisfied with their work.“I was very unhappy with the quality and with how sloppy they were,” he says. “They used to leave me a mess all the time, concrete debris and beer cans all over.”

So Hallack began learning how to pour concrete, gradually growing more and more interested in the medium. He went to the World of Concrete trade shows in Las Vegas, attending seminars and learning about new products. Back at home, he began pouring and stamping practice slabs on his property, until he had confidence in his skills. Then he started experimenting with color.

Once his eyes were opened to the possibilities, there was no going back to plain old gray slabs. The allure of decorative concrete had him firmly in its grip, and still does.

“I don’t think there’s another product you can do as much with as concrete,” Hallack says. “The opportunities for using your artistic talent are endless. There are no limitations, no borders whatsoever, except your imagination and your creativity and your enthusiasm.”Gradually Hallack began to introduce concrete services to his landscaping customers, and the jobs he took on grew bigger as his skills and confidence grew. His first major milestone came when he contracted to do an outdoor multipurpose sports court (basketball, tennis, handball, etc.) at a private residence. It

was a challenging project that couldn’t have any birdbaths it whatsoever, and it had to drain perfectly. Hallack lost a lot of sleep worrying about it, but it came out flawless in the end. And it opened the door for other opportunities.“It was done in one of the most prestigious neighborhoods in Modesto, and anytime you work in these kinds of neighborhoods, people are more willing to trust you, and architects are willing to talk to you longer and so on,” Hallack says. “After that referrals began popping up left and right.”Eventually, the concrete side of his business began eclipsing the landscaping end, and he discontinued the landscaping entirely in 1997.

The importance of image
Maintaining a clean-cut company image has carried over from his landscaping days into his concrete career.

“From day one all of my vehicles are well-painted and clean, and we have the company name, telephone number and website on them,” he says. “All of my employees look clean and well groomed, and all of my staff representing me in the field wear uniforms — very comfortable, good quality T-shirts with the company name and logo on them.”

Even after all his years of concrete work, Hallack still gets jittery and loses sleep before starting big jobs. But he hasn’t lost any of his enthusiasm for decorative concrete.

“I still get really excited about every project,” he says. “You can take a boring piece of gray concrete, change the appearance of it with stains, saw-cut lines here and there, and suddenly you have a piece of artwork. It’s a fact that the best product that Mother Nature has given us, and that God has given us, is concrete.”