What’s the secret to that shine?

If you ask Poinsettia Byrd, senior technical salesperson with VIC International, a company in Tennessee that specializes in surface prep equipment and supplies, she’ll tell you success lies with the polishing process.

At this point, you’d switch to resin-bond diamonds, going back over the floor with a 100-, 200-, 400-, 800-, 1500- and 3000-grit diamond to achieve that high-gloss shine that can be seen in automotive showrooms across the country. “I know that’s a lot of steps but there wouldn’t be so many different grit diamonds if we didn’t expect you to use them,” she says. “So many contractors get frustrated when they can’t get off the job because the shine isn’t quite right. Ultimately, when we talk, I find out that they have skipped some of the grits. If they had done the right sequence in the first place, they would be off that floor and onto the next … not calling me for advice.”

Jim Walton, sales and training consultant for Innovatech Products & Equipment Co. Inc., a Seattle-based company that also specializes in surface prep equipment and supplies, echoes Byrd’s philosophy. “It’s typically a six- or seven-step process to bring the concrete up to a high sheen,” he says. And unlike the high gloss that can be achieved with any number of coatings, “This highly reflective appearance is all done mechanically.”

The new kid on the block
Polished concrete floors — which are popping up at big box stores, malls, warehouses, restaurants, distribution centers, showrooms, schools, hotels, manufacturing facilities and high-end residential homes across the country — are relatively new to the decorative concrete arena, having made their debut less than 10 years ago. Steadily growing in popularity, these mirror-like surfaces are as tough as they are beautiful. And perhaps the best part of the whole package is that it takes little effort to keep them that way. 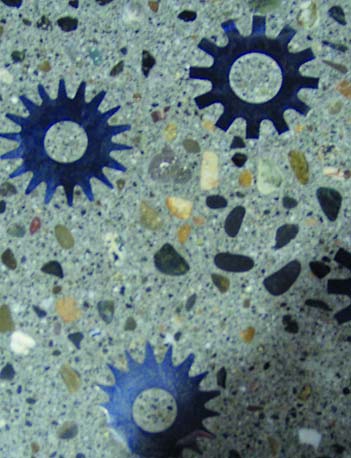 The low-maintenance floors need only be swept or dry-mopped regularly and washed with a neutral cleaner. Although the finish can resemble glass, a clean surface is less slippery than an unpolished slab, independent tests reveal. It’s the dirt, dust or water that can cause a ball-bearing effect. For the safety conscious, there are products that can be applied to increase the slip resistance.

“The biggest advantage of polishing a floor is that it lets the floor breathe naturally,” says Walton, since there’s no coating to contend with. “This is a potential fix for any concrete that has vapor moisture transportation problems.” 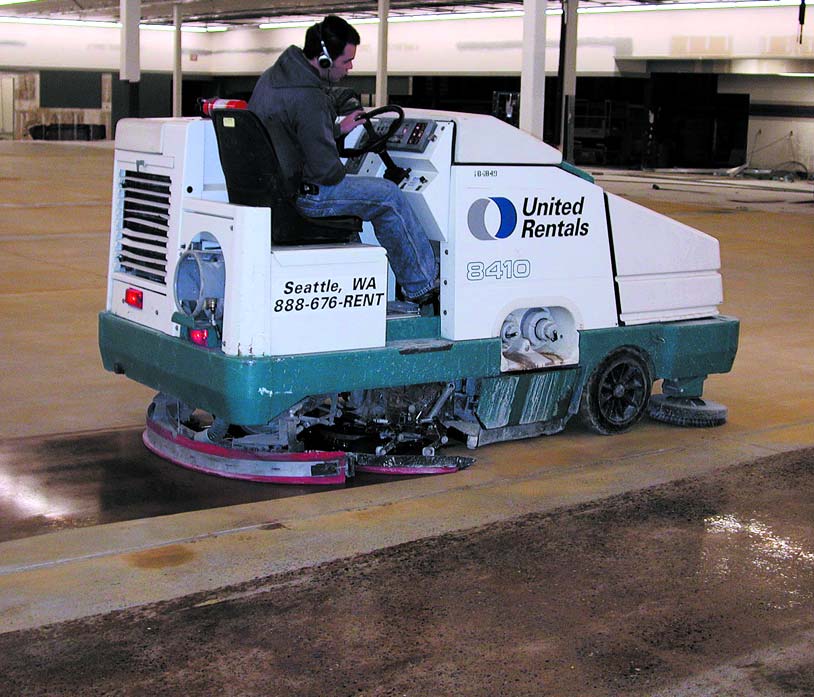 Most any structurally sound concrete floor can be polished, but keep in mind that visual defects that are present before may still be there afterward, albeit a lot shinier. If you’re lucky enough to plan for a polished floor from the bottom up, “The possibilities are endless,” says Greg Ferchaud, national sales manager of Seattle-based SASE Co. “While the concrete is being poured, you can add all sorts of things: different aggregate, seashells, screws, bolts, broken glass, marbles, whatever you want. Then when you start to grind it down, all these things start showing their faces.”

With new pours, you have the option to integrally color the mix or stain it at any stage you pick. Some contractors also use shake-on color with good results, but this process tends to be a bit tricky. 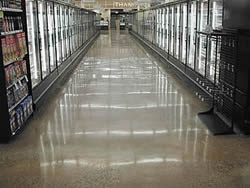 There are no hard and fast rules governing when to add color to an existing slab, Ferchaud says. “You can stain and polish existing concrete or you can polish and stain existing concrete, depending on the look you’re after.” Most of the jobs out there, however, involve polishing uncolored existing floors. “People are just starting to see the opportunity of planning ahead. I’d say nine out of 10 polishing jobs involve floors that weren’t meant to be polished,” he says.

“Stained concrete has been around for many years,” Ferchaud notes, while polishing concrete has really only taken off in the last three or four years. “Marrying the two together has become the new trend in the last year. It’s difficult to do.”

But the end result is stunning. “First and foremost, you get a low-maintenance floor. It also just so happens to look great and last a very long time. The shine is just a plus.” 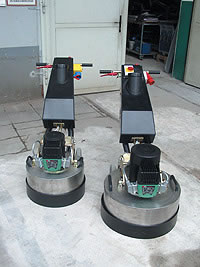 Planetary polishers do it right
Most contractors today use a planetary polisher or a quad-head system to give the surface its reflective qualities. A properly polished concrete floor can last anywhere from 10 to 20 years, Byrd says.

Ferchaud, whose company SASE prides itself as a surface preparation equipment specialist, points out that most concrete slabs are not very level and have both high and low spots. To accommodate the typical slab’s shortcomings, a planetary polisher with a floating head system is your best bet.

You need to have a machine with floating heads that follows the contour of the floor. This will allow you to increase production, shine and, ultimately, your bottom line.”

Elna Beck, president of Leitch and Co./Intertool, a company in California specializing in stone-polishing equipment that it has adapted for the concrete industry, makes a variable speed side-driven planetary polisher that is designed to produce a flat, swirl-free finish on smaller areas including countertops and steps. She says her equipment is so easy to operate that you can move it across the material with one hand. And it’s very efficient. “It’ll produce a perfect finish five times faster than a single-head polisher,” she says. The company also makes a larger version, specifically for floors, that can grind, hone and polish.

Like Beck and Ferchaud, Innovatech’s Walton is among the many that believe a variable speed, counter-rotating planetary grinder and polisher is critical to the concrete polishing process because it flattens and levels the floor better than anything else out there. Still, there is a lot of torque associated with the typical three-headed planetary polisher, he notes, adding, “It has a tendency to pull the equipment operator one way or another.” To combat this problem, Innovatech has developed a four-headed version which eliminates this torque. The company will debut the new counter-rotating grinder at the World of Concrete in Las Vegas in January 2005. 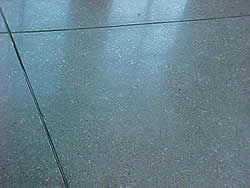 Diamonds make it sparkle
When it comes to polishing, the experts agree: Skimping on the diamonds will get you nowhere fast.

“To get that beautiful mirror finish without waves, you need to give that floor as much flatness as you possibly can,” explains VIC International’s Byrd. Each diamond grit forms its own “hills and valleys” scratch pattern, she says, and “A lot of people skip steps and buff in material in between changing diamonds. They’re just filling in the hills and valleys.”

To properly polish a surface, she says, “The next tool you use must take out those hills and valleys and replace them with its own. Eventually the scratch patterns get very tiny and you wind up with a surface that is virtually flat.” And, if you combine all these steps with a good densifier that actually penetrates the concrete rather than just sits on the surface, you’ll create a hard and flat surface that is very wear resistant.

Resin diamonds have a tendency to roll with the waves in a concrete floor, Byrd says, while metal bonds typically grind through that. “If you weren’t concerned about flattening the floor, you could just polish the surface with resin diamonds, but you wouldn’t get the best results.”

Walton adds that he’s found that phenolic resin diamonds work better than other resins he’s tried. “They give the floor a much deeper shine,” he says. “They’re capable of making the light reflection look 10 feet deep.”

To be truly successful, Ferchaud says, you need to let the concrete talk to you. “I don’t believe there’s a true formula for polishing concrete because every floor is different, every pour is different. Let the floor tell you when to use metal or resin and when you need to switch. Understanding concrete and diamonds will put you ahead of the competition.”

Polishing: It’s not for everybody
“Polished concrete is a great flooring solution, but is not going to be found everywhere because of the initial installation costs associated with the application, especially in floor rehabilitation projects,” says Thad Hovis, sales manager of Innovatech. “Typically, it’s geared more toward larger size projects, as these can be installed at a lower cost. And anyplace subject to heavy oil or chemical exposure should consider alternatives such as floor coatings.”

Contractors who are considering breaking into the polishing business, he adds, should be prepared to spend between $10,000 and $50,000 for a comprehensive equipment package. However, Hovis adds, just having the equipment isn’t enough. Contractors should consider “the total package” when selecting an equipment supplier, he stresses. “To maximize profits and overcome the learning curve associated with polishing concrete, contractors need the right equipment, superior diamond products and ongoing service and technical support.” 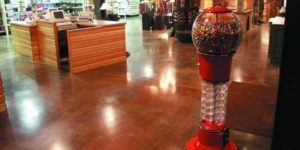 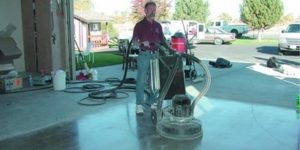 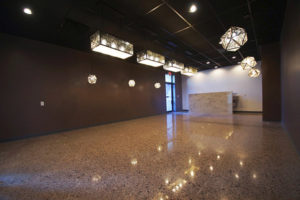