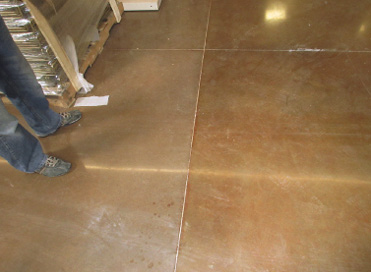 Colored concrete is beautiful, but laying it down can be an ugly business. So many things can go wrong — the weather turns, supplies run out unexpectedly, batches of cement vary in shade. Getting decent results often means spending hours or days compensating for circumstance.

Concrete Decor came up with three “what if” disaster scenarios and posed them to three experts in the decorative concrete industry. Will their responses help? They might. If you run into any of these three scenarios, you will appreciate all the help you can get.

You’ve completed a stamped porch and walkway using color hardeners. But you ran out of color hardener while treating the walkway, and now the walkway is lighter than the porch. The concrete is dried but not yet sealed. How do you darken the walkway so the two slabs match?

Clark Branum, northwest area manager for Rafco Products, offers a simple answer. “You’re better off just re-covering everything with one product,” he says.

Rafco uses the same pigments in its release agents and color hardeners. If you treat both slabs with a pigmented release, you can achieve the same color you would using the proper amount of amount of color hardener on each surface, he says.

For a more permanent solution, Branum recommends coating with cementitious paint, such as his company’s Cem-Coat. “I can also make Cem-Coat an exact match to the hardener,” he says. “And it’s quick and easy to use.”

Acrylic pigments are useful for touch-up and will work with a variety of base carriers, he says.

A third option is color-washing the surface with a release agent, then topping it with a pigmented sealer. Blending a release agent with a sealer can allow a contractor to get pretty specific in terms of color. But the result will be more translucent than opaque, Branum says, and it can’t be tweaked once it’s on the slab. What’s more, VOC regulations prohibit color-washing in some parts of the country.

Finally, there’s the option of ripping it out and redoing it. “That’s not beyond some guys,” he says.

On an outdoor acid staining job, bad weather creates the need for two separate pours. Because of the different mix compositions, the staining application produces different colors. Is there anything you can do to get them to match better?

When it comes to fixing uneven stains, there’s no great answer, says Ira Goldberg, president of Beyond Concrete (formerly Bomanite of New Jersey, New York City and Long Island). “It’s really, really hard to even something out. Once it’s done reacting, it’s done.”

Goldberg doesn’t like using topical fixes, such as pigmented sealers, to fix a faulty stain job.

Instead, focus on staining the lighter side a second time, as it’s almost impossible to lighten concrete. “Another application will make it darker – if it takes,” Goldberg says.

If the two gray slabs are different shades after a pour, Goldberg says, the sides will definitely differ after stain is applied. In cases like this, where a problem appears imminent, stain both sides evenly with one coat. Wash a sample to see how both sides look. Then apply a second coat, diluting the stain used on the darker portion. Keep in mind that overloading the lighter side with stain can be dangerous. “What might happen is you might change the color altogether,” he says.

If the initial coat of stain is diluted, the concrete is more likely to react to additional coats. Most contractors apply acid stain straight out of the can, which cuts their chances of success, Goldberg notes.

If color adjustments don’t work, you can still try to trick the eye. You may be able to mottle the stained surface enough to make shade differences hard to notice, he says.

A straight line between two pours invites an observer to compare the two sides. So make the line between the two shades irregular. Instead of darkening the whole lighter side, touch it up and blend it in, going up to three or four feet back from the line. “You don’t have to do the whole surface,” Goldberg says. “You just have to play with the transition line.”

Time sometimes solves the problem by itself, he says. Often, separate pours will look more like each other after they’ve cured. A panicked contractor will sometimes sink hours of labor into fixing a difference, only to make the cured result worse. “They sometimes have to take up to a month to catch up to each other,” Goldberg says. “Sometimes you can ruin a good thing.”

The best defense against mix composition differences is using mixes that don’t differ. Often, of course, a contractor has no control over how the floor was poured. But if you can, lean on the supplier to use identical cement in both pours. “Try insisting that the concrete is coming out of the same plant and that there’s no change in the cement that day,” he says. “It has to be the same plant and the same cement.”

You poured a driveway using integral color. You’re expecting rain overnight. What do you cover it with? If it rains for days, what do you do then?

“The first answer is, don’t pour,” says Steve Johnson, marketer and product developer for the ready-mix division of Solomon Colors. “If you haven’t poured yet, don’t begin.”

If you persist, or if bad weather sneaks up on you, the goal is to protect the pour while sustaining its color. Covering the pour with a plastic sheet or blanket may discolor the surface. “It will look beautiful,” he says, “but different.”

First, look for gutters on the building, Johnson says. If they aren’t up, the biggest threat to the slab will be a cascade of rainwater from the roof. Its velocity and volume will carve into fresh concrete, and it will continue dripping even after the rain has stopped. “Even if you pour in the morning and it rains at night, the rain will erode a strip in front of the garage doors,” he says.

A contractor should check gutters and weather conditions before starting the job, he says.

“When I was in the business as a concrete contractor, I wouldn’t pour at all if there were no gutters. Go to another job. I’m serious.”

If there are no gutters and rain is imminent, erect a plank system above the concrete that will take the force of the falling water. It doesn’t have to carry the water off, just break the fall. A 1-by-12 board suspended just above the concrete by a 2-by-4 at each end will do. “It will roll off either side, but a several-inch drop is OK,” Johnson says.

He says the best advice he can give to protect the rest is to use plastic, sealing the cover so water can’t get underneath, then pulling it off as soon as possible so it doesn’t leave marks. An imperfect solution, it’s still better than using drywall, which leaves residue that must be pressure-washed, or cardboard, which will leave stains on the concrete.

“Any cover will have a reaction,” Johnson notes. “But you have to save the pour. You never know. You might get lucky.” 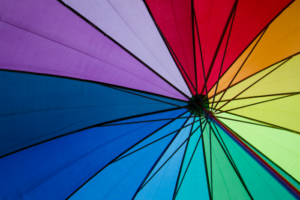 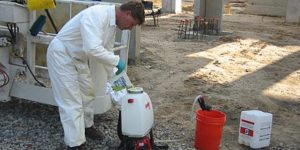 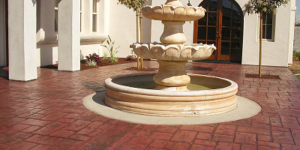