Dyes can broaden your color palette, create subtle effects not possible with other coloring agents, and fix problems with acid stain applications. 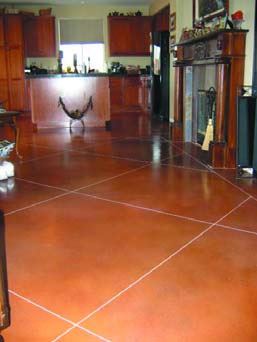 But not only can you use them, you can vastly expand your color palette with them.

With dyes you can get virtually any color under the sun — or at least on the color wheel. And you can get brighter, more vibrant colors than you can get with acid stains, which are limited to a narrow range of earth tones. If that weren’t enough, dyes can also save your butt when good acid staining goes bad.

“What you see going down is the color it will be when all is said and done,” says Mike Miller, managing principal of The Concretist Inc. “You can almost think about dyes like lighting in a theater, where you’ve got lights with colored filters over them. If you shift to an orange filter, everything on stage looks orange. That’s kind of what happens with a dye.”

Of course, tinting strength and penetration will vary depending on the characteristics of the concrete you are working with.

Dyes can be used in conjunction with acid stains or all on their own.

On their own they supply a cementitious surface with the even-across-the-board color shift of stage lighting. They can be layered for a variegated effect, but the variegation is entirely in the hands of the artisan. (For example, Bob Harris, president of the Decorative Concrete Institute, sprays dyes along the ripped edge of paper for a marbled look). When used with acid stains, they can provide accent colors, color layering and depth, and shifts in color extending far beyond the earth tones of acid stains.

As a butt-saving tool, dyes can set things right when unruly acid stains don’t do what you want them to. Occasionally an acid stain will fail to react on a patch of a cementitious surface; dyes can be used to mask the imperfection. They can also be employed to shift the entire color of an underlying stain. “If the customer doesn’t like the final outcome of the color that comes with the stain, you can change it — move the color in a different direction with a dye,” says Victor Pachade of Colormaker Floors.

Choose your base for varying effects
oth water-based and solvent-based dyes are available, and each can be found either in solution or in powder or liquid concentrates.

Water-based dyes offer a pastel, watercolor look, which can work nicely when layers of color are called for.

Ricardo Hernandez, owner of Concrete Countertops in Hollywood, Florida, takes advantage of the variety of colors and saturation characteristics of dyes to create faux stone effects on his countertops. He uses water-based dyes for producing weathered stone, and he uses solvent-based dyes for more dramatic looks. “I can make a countertop look like a piece of jade or a piece of turquoise with dyes,” he says. “You can’t achieve that look with acid stain.”

Water-based dyes come in mix-’em-yourself basic colors, too, though some manufacturers sell them ready-mixed. The SuperStone line of water-based dyes, for example, includes 30 colors. “We’ve got everything from greens to yellows to grays to pinks to all sorts of peachy colors,” says Tony Catlett, SuperStone’s recently retired general manager.

Both water- and solvent based dyes can be diluted for less saturated color. SuperStone, for instance, recommends diluting its solvent-based dyes by half for pastels, and by 10:1 for light color casts. Some artisans start out with extremely high dilutions, then work their way back up with layers of less diluted dye. Quick-drying solvents lend themselves well to this approach. “I always dilute like 90:1, and then I get a feel for it, see how it’s going to be reacting, and then I start applying more color,” says Hernandez. “Once you’ve applied too much, there’s no turning back.”

Application and prep
Floors have to be thoroughly cleaned and absolutely dry before applying dyes. The more porous a floor, the better it will accept dye. Hard-troweled or other closed surfaces might need to be opened up with an acid etch.

Both types of dyes can be applied in the same ways acid stains can be applied: with airless sprayers, brushes, rollers, sponges, etc. But dyes are a little trickier to work with than stains. For one thing, a knowledge of color theory (red plus yellow equals green, for example) is required to mix colors successfully. And dyes behave differently than stains. Water-based dyes evaporate slowly and will leave rings if allowed to pool. Solvent-based dyes evaporate rapidly and require a deft touch. “You’ve really got to play with them a few times before you use them,” says Art Pinto, president of DecoSup. “Especially the solvent-based dyes — they evaporate so quickly, you’ve really got to know how to apply them and spray them so you don’t leave brush marks.” 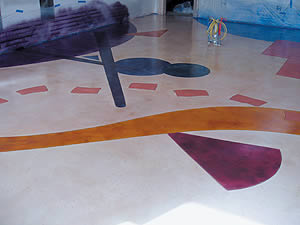 But unlike stains, which leave residue that must be scrubbed off, dyes are applied, left to dry — and that’s it.

Dyes can be used indoors and outdoors, but they’re not as resistant to ultraviolet light as acid stains are. And if they’re not sealed, they’re subject to washing away, since dyes don’t actually bond to concrete like stains do. A good UV resistant sealer can solve both problems at once. Bob Harris recommends avoiding the boldest dye colors for outdoor use. “I would not use a very intense color outside, such as a bright red, a bright yellow or a bright blue, for fear that you could get some fading,” he says. “But we’ve found that when you combine primary colors — to make a brown or a tan or something — we seem to get less fading.” He’s been testing Colormaker’s water-based Someru dyes outdoors with a sealer. In the past two and a half years he’s found no discernable fading in the dyes. 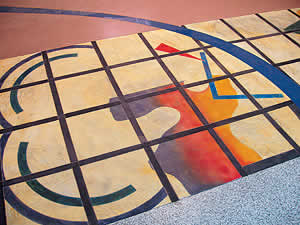 One caveat about applying sealer with a roller: The roller may pick up dye and move it to other parts of the floor. If there’s a risk of spreading the dye to areas where you don’t want it, consider rolling each section of the floor with a separate roller, or just spraying on the sealer.

Handle with care
Another dye caveat: Solvent-based dyes can be particularly hazardous to work with. Stories of vapors igniting, injuring workers and burning down job sites are all too common. Even pros like Mike Miller have horror stories. Miller was working with dye in a basement that the homeowner had prepped and masked before Miller got there. The pilot light on a heater hiding behind a masked-off closet set the floor Miller was working on ablaze. “Fumes ignited and whatever liquid was still left on the floor burned.

I was right in the middle of it,” he says. “I was burned bad enough to be in the hospital for a month. Ended up with skin grafts, and things like that.”

So be careful. Dyes can vastly expand your color palette and save your butt in a pinch – but those with solvents must be handled with care. 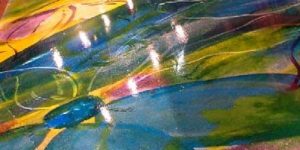 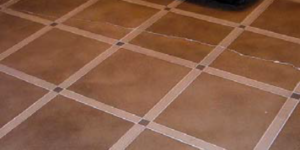 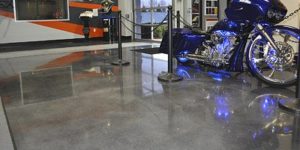