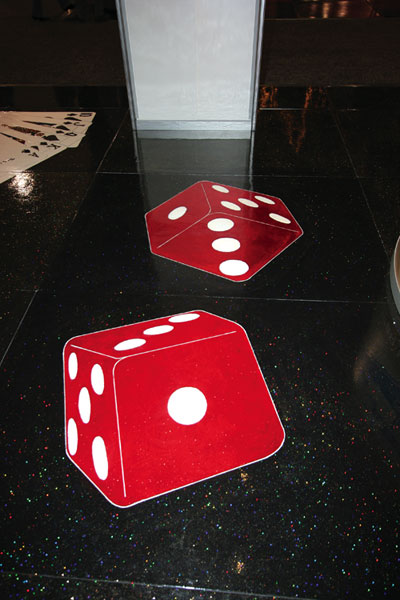 Super-Krete's waterproof deck system. On this floor, Super-Krete Micro-Bond were applied over the company's Bond-Kote and sanded down to achieve an ultra-smooth finish.

It wasn't just luck of the draw that brought so many visitors to Super-Krete's booth at the 2006 World of Concrete show.

Of course, the booth featured the famous Super-Krete girls, who were quite an attraction unto themselves. But the floor got just about as much attention — and everyone wanted to know how it was done. Here's the scoop:

After the floor was constructed with Super-Krete's waterproof deck system, two coats of Super-Krete Micro-Bond were applied over the company's Bond-Kote and sanded down to achieve an ultra-smooth finish. Then, Super-Krete Ure-Kote (paint) was applied to the floor, and the decorative hand-cut designs were brushed in detail.

After the first coat of Clear Seal, automotive paint glitter was broadcast over the floor. After it dried, the excess glitter was blown off and the floor was sealed with two coats of Super-Krete S-8900 Two Part Urethane Sealer. The sealer proved itself industrial grade as it held up to the thousands of attendees who visited the booth.

Super-Krete has announce the release of its new website, www.Super-Krete.com, designed with a fresh, mobile-friendly look, user-friendly navigation and updated with the latest information about Super-Krete products and systems. 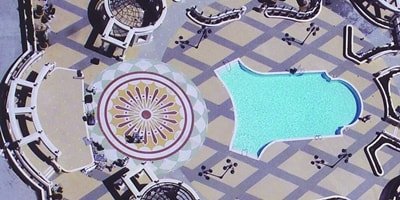