Water is the most harmless substance in the world. It won’t stain clothes, car seats or upholstery. But it will play havoc with a batch of colored concrete.

When integrally colored concrete looks faded, H2O is the prime suspect, says Nick Paris, vice president of marketing for Davis Colors. The more water in a mix, the less intense the tint, he says. “Too much water is just the devil for decorative concrete. That’s a common theme we get in most of our complaint calls.”

Most contractors know better than to pitch bucketfuls of water into a half-poured batch of concrete, and if they don’t, they learn fast.

Using admixtures that change the water-to-cement ratio and other properties of concrete is, pardon the pun, more of a gray area.

Aside from an integral color admixture itself, only one type of admixture is going to have a significant effect — a calcium chloride accelerator, which can cause mottling. “In general, admixtures when used properly do not have an effect on the final color,” Forgey says.

However, many admixtures are designed to change the water-to-cement ratio in a batch, and that effect can sometimes be noticed, if only faintly.

And you’re going to get a chemical reaction as well, says Chris Sullivan, technical director for QC Construction Products. “The bottom line is no one knows all the reactions that happen when concrete gets hard. There’s so much going on.”

Most experts agree that there is really only one factor a contractor needs to think about when putting an admixture into integrally colored concrete, and that is consistency. “It’s all about consistency,” Sullivan says. “At the end of the day, stay away from calcium chloride and be consistent with everything else and you’ll be fine.”

Consistency is easier said than done. Even Sullivan acknowledges that a uniform pour of any significant size is the most difficult task to pull off in decorative concrete.

Even so, Sullivan ranks admixtures below water-to-cement ratio, cement color, the amount of cement, and the aggregate as a factor in the final color of an integrally colored slab. Even when an admixture is used to alter the amount of water needed in a mix, casual observers may have a hard time finding fault with the results. “While there is a color effect, it’s minimal,” he says. “You really are going to have to look to notice a difference.”

If a slab poured with varying amounts of admixture is blanketed with joint cuts, release agents, patterns and textures, the difference will be hard to make out. “If there are any inconsistencies in the color, you’ve kind of masked that,” Forgey says. “Putting a border across a driveway breaks up what the eye sees.”

Aside from how much a performance admixture will affect tint, the most important question is how. Let’s take a closer look at five common types of additives.

Air entrainers
An air-entraining admixture makes concrete more porous to improve its durability in freezing temperatures. Because a rougher, more porous surface will scatter light rays, these additives may give untroweled colored concrete a faded, less intense appearance. “The more air you add, the lighter color you’re going to get,” Sullivan says.

On the other hand, air-entraining admixtures won’t impact the shading itself, says Scott Thome, director of product services for L.M. Scofield Co. “The amount of additional water is low enough not to alter the water-to-cementitious-content ratio.”

In fact, air-entraining mixtures can actually aid color development. By blocking bleed-water passageways, they force the water to linger inside the curing concrete. “The slower the water leaves the slab, the less impurities come to the surface,” Thome says. “These impurities will have an effect on the final color.”

Air-entrained concrete also gives workers something to sink their trowels into — a creamy, foamy topping that some say responds better than straight concrete. “They’re basically creating suds on the surface,” Paris says.

With the same coloring and the same troweling, a 6 percent air mix will present the same surface color as a zero percent mix, Sullivan says. Essentially, a surface of an air-entrained slab can look rich and bright even while its interior looks comparatively dull. “In colored concrete, there is a difference between what you see inside and what you see on the surface,” he notes.

Plasticizers
A plasticizer reduces the amount of water needed to get a given consistency. The less water, the richer the tint, so at first, concrete mixed with plasticizer will give off a richer color. However, as it hydrates, it will lighten and basically assume its typical color, Sullivan says, and the end result is “no effect down the road.”

However, Thome warns that using a plasticizer alongside an integral color admixture with water-reducing properties may overplasticize the mix. “Using a color admixture that contains a water reducer and then adding a high-range water reducer to increase the flow, you could develop a retarded mix,” he says. “The set time could dramatically increase, which causes a delay in the finishing process. During the delay, if the surface starts to dry out but the mass is still plastic, surface cracking may occur.”

He offers a solution: “By lowering the amount of the plasticizer to compensate for the water reducer in the coloring admixture, you will have a workable mix design.”

Accelerators
Decorative concrete contractors must avoid calcium chloride accelerators, because the chemical destroys iron oxide pigment particles. Nonchloride accelerators, such as triethanolamine, are considered safe. But might they darken a slab even a little? Maybe. “That’s more just a rule of thumb,” Forgey says. “All the things we’re talking about are really subtle differences. We’re not talking about going from orange to green.”

Even a subtle difference is worth considering when using accelerators, because they are added inconsistently as a matter of course, whether to stagger set time or offset an overnight drop in temperature.

“Using a nonchloride accelerator will have minimal to no effect on the ultimate color when using an integral coloring admixture,” says Thome. “Once the accelerator is no longer needed, gradually reduce the amount being used. This will minimalize the potential for dramatic color swings in the same area of the project.”

Water Repellents
A water-repellent admixture decreases the permeability of a slab so that it keeps water out. “Once concrete is cured, water does not penetrate,” Paris says. “Water beads on the surface.”

But the effect may also intensify color, Sullivan says. The beads of resin that make up a water-repellent additive create a mirror effect from the inside, giving off a sheen just like a surface coat of sealer, he says. “It’s putting a micro-sealer, if you will, on the inside. That’s strictly light reflecting.”

On the other hand, a stearate water-repellent may lighten the batch a little, Forgey says, if only because so much of it is needed to get the right effect.

Pozzolans
Many observers classify fly ash and other pozzolans as admixtures when they are added to batches to improve workability and plasticity. “It’s a cementitious mixture, but it is marketed as an additive that offers different properties to a mix,” Paris says.

If a pozzolan has a plasticizing effect, it will reduce the amount of water needed and may account for a richer color. But more importantly, of course, pozzolans come in their own colors, from light metakaolin to dark fly ash. “All pozzolans have some color to them,” Thome says. “If the color of the pozzolan fights with the integral coloring admixture, the end result could be lighter or darker than intended.”

Ready-mix producers have grown accustomed to substituting fly ash into batches without much thinking about it, Forgey says. “Historically, that was something people never much cared about. Nobody really looked at the look of the concrete.”

So if a contractor doesn’t want fly ash in a batch, the supplier needs to be told. “Like everything, it comes down to a good rapport with the producer,” Forgey says. “Ready-mix suppliers are getting more into the colored concrete business. They tend to want to work closely with those customers to make sure they have the right mix.”

And as always, testing is a good thing. “We always recommend some kind of test pour,” Forgey says. “Try to keep everything — fly ash, sand — consistent after that.” 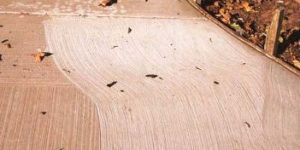 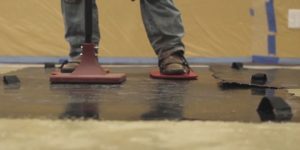 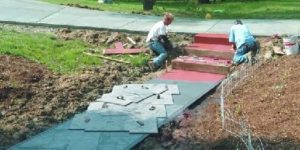