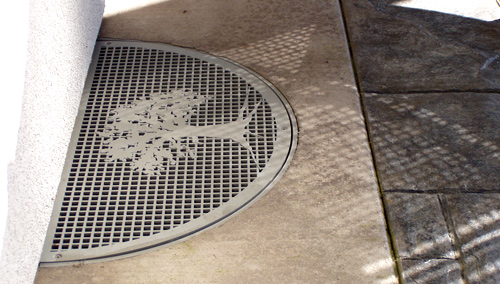 This plastic half-pipe with a grated top can be used in valve boxes, foundation vent wells, a downspout drain, a patio or yard drain, and anywhere else a decorative concrete slab needs a hole.

It’s a classic dilemma. The more beautiful the outdoor decorative concrete, the more those ugly drain and vent holes stand out. A half-circle of corrugated pipe poking into a carefully crafted design can thwart the best artistic intentions.

Luckily, there’s a product that puts a lid on this issue once and for all: the Dec-O-Vent. This plastic half-pipe with a grated top can be used in valve boxes, foundation vent wells, and anywhere else a slab needs a hole. It can even be used for terracing on slopes.

The Dec-O-Vent is 12 1/2 inches deep with a diameter of 28 inches. Its lid is adorned with a picture of a tree, and both the lid and the top part of the plastic well come in five colors — light gray, beige, brown, charcoal gray and green.

A downspout drain is well served by one Dec-O-Vent. An installer (or the manufacturer) can create a patio or yard drain easily by placing two of the units back to back and caulking them.

Besides the well and lid, Dec-O-Vent accessories include stainless screws to lock down the lid and an expansion shield for cold-weather climates. A protective lid decal can be pulled off after the area around the drain is painted or sealed.

Dec-O-Vent was introduced to the marketplace by a contracting outfit that did decorative swimming pools, but today it’s the joint property of Wes Norton of Ashland, Ore., and PolySteel Alternative Building Systems Inc., a concrete contracting company based in Central Point, Ore.

PolySteel president Darrin Thornton discovered the Dec-O-Vent at a World of Concrete conference about five years ago. His company became one of Dec-O-Vent’s biggest customers, stockpiling units and even reselling them to other companies and contractors. “Literally every house we’ve done since then, we’ve used at least one,” he says.

When he poured stamped concrete all the way around the perimeter of one house, he placed 50 or so in crawl space vent wells. He preserved his design without impeding the flow of air to the crawl space, an arrangement that pleased the inspector and the homeowner too.

The half-circle vents have been helpful to him as a decorative contractor in other ways as well. The 90-degree corners of squared-off vent wells are crack magnets, requiring joint-cutting that can intrude on a design, he says. “This doesn’t dictate where I put my control joints in decorative concrete.”

The lids prevent unwary guests from stepping into the vents and hurting themselves. They will also keep leaves and other debris from clogging the holes.

PolySteel acquired the rights to the accessory in December 2006. The former owners were having the plastic vents made well in China, but after one more shipment, PolySteel is going to begin having them made by a plastics company in the state of Washington. 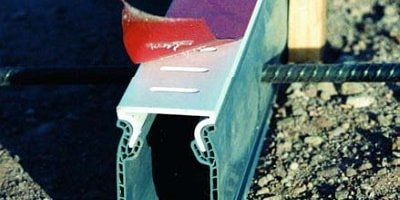 From trench drains to catch basins and grates, here's what you need to keep standing water off your outside projects. 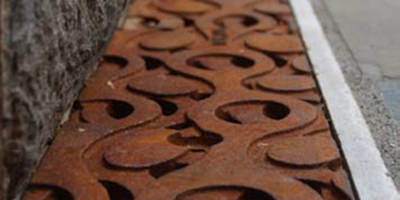 Decorative cast iron grates look impressive. But too often, they’re also expensive, so they aren’t considered for any projects but those with the largest budgets. A company called Iron Age Designs hopes to change that.