Unique Concrete is true to its name. Like many decorative concrete contracting firms, it constructs pool surrounds, patios, sidewalks and driveways. However, unlike other contractors, it also specializes in laying concrete on top of decks. Not patios, porticos or covered porches. We’re talking about run-of-the-mill, dime-a-dozen, ordinary wooden decks.

For more than 25 years, Unique owner Barry Fisher of West Milford, N.J., has been performing his magic, sprucing up drab decks with a generous overlay of concrete — no thinner than 1 1/2 inches — and transforming them into concrete-covered creations homeowners marvel over. 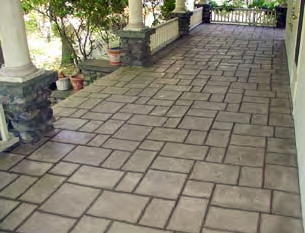 A concrete-covered deck isn’t just an aesthetic improvement, he points out. The covering creates a rain-free area underneath the deck where items can be stored. And the surface is perfect for standing up to extreme environments with harsh elements or where fire is a consideration.

“Most homeowners I deal with have been unaware of the potential their existing decks have,” Fisher says. And the best part, he adds, is that resurfacing an existing deck can be very cost-effective for them, especially if it’s in good shape and doesn’t need any additional support to hold the extra weight.

If a deck is built to code, Fisher continues, he usually doesn’t have to do anything special to the structure before resurfacing it. “I would never apply this much weight to a deck without first determining it could handle the extra weight,” he says. In some cases, he and his crew have to pour extra footings, beef up the joists or add support to the ledgers that attach the deck to the house. In extreme circumstances, they tear it down and start from scratch. The resurfacing process he uses involves wire mesh and structural synthetic fiber in the concrete mix. He pours the concrete onto the deck — in the same manner he uses for any other job — and uses his hand-made stamps to create deep impressions. 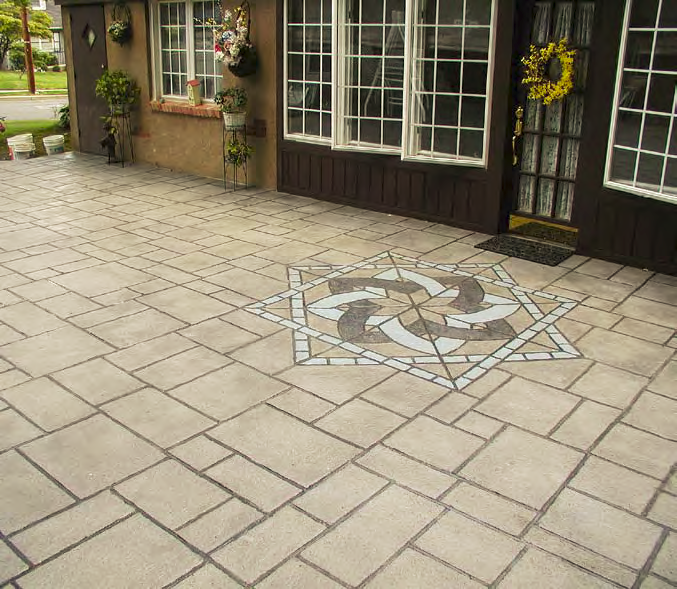 For typical jobs on nonwooden surfaces, he says, he puts in control joints every 4, 6 or 8 feet. But because a wooden deck is flexible, which causes the concrete to more readily crack, he puts them in more often. “We incorporate the construction and control joints within the grout lines to make them less obvious,” Fisher explains. “The deep impressions (and grout lines) actually become a geometrically patterned crack-control system done in a decorative way.”

Fisher founded Unique Concrete as a masonry concrete company. It morphed into a concrete stamping outfit when decorative concrete began to catch on in the Northeast. “Once I saw the process back in the mid-‘70s, I was hooked,” he says. He established the company in northern New Jersey in 1980 and has been stamping ever since. All told, he has 40 years experience in the masonry trade and 30 years of creating patterns in colored concrete. 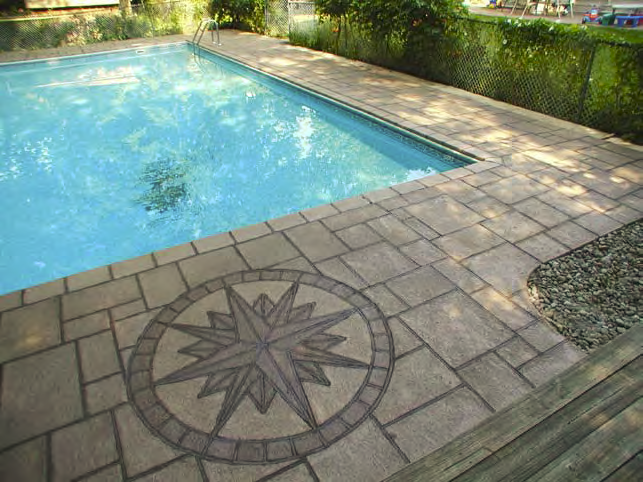 The business is owner-operated and family-run. His wife, Marilyn, handles the phone calls and paperwork. And he and his three sons — Timothy, 22; Travis, 24; and Todd, 27 — do all the rest. “The four of us work well together as a team,” Fisher says. “Everybody handles all aspects of the job.”

Whereas most companies today use mats for their stamping projects to create the appearance of brick, tile and stone, Fisher says his family prefers old-fashioned cookie-cutter stamps that they make themselves. “We just evolved in a different way than most,” Fisher says. “We took the idea of stamps and went in a direction that worked for us.” 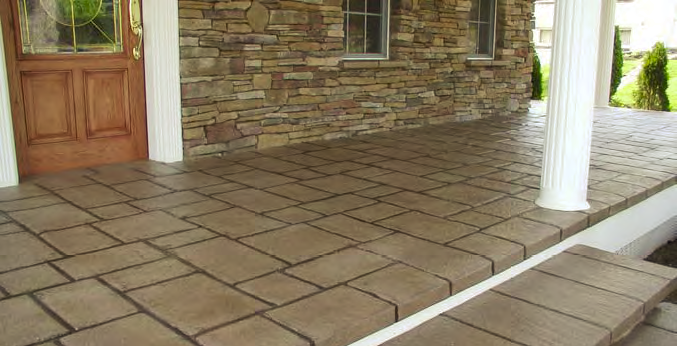 When stamping, they make deep impressions in the concrete that are grouted and tooled to create the look of custom masonry. Fisher and his sons insist on deep impressions — typically 1 1/4 inches deep and 1/2 inch wide — and they always use real grout, which has the same expansion and contraction rate as stamped concrete. “I feel the actual grouting process creates a more realistic appearance than simulated grout joints,” he explains.

To date, they have 15 different patterns. The newer ones, he says, are larger in size and more dramatic.

Plus, they don’t use color hardeners. All their concrete is integrally colored. “We use synthetic iron oxide,” he says, “the same coloring agent that goes into pavers.” 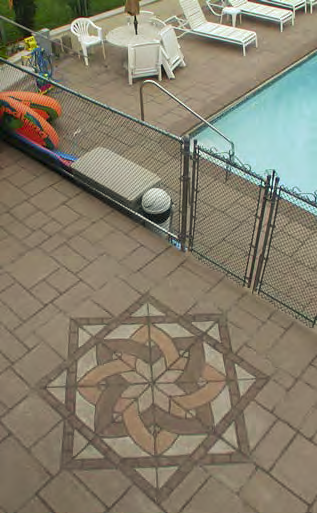 Unique Concrete’s specialty involves resurfacing existing concrete as well as decks. And unlike many other companies today, it only uses actual concrete, not a polymer overlay.

“We don’t have the ability to do thin applications like those companies that offer polymers. We can’t go thinner than 1 1/2 inches,” Fisher says, admitting that his surfacing method isn’t suitable for all types of work. “We can work with copings but critical heights such as doorways are an issue.” In order to allow the product to be used in some instances, doorways must be raised, which isn’t always practical.

Fisher says his resurfacing method works best on areas that have settled or spalled and that couldn’t be adequately covered with polymers, such as sidewalks and pool surrounds. His work has not only been praised by a host of customers, but also within the industry. Unique Concrete netted a first place for exteriors in Concrete Decor’s 2006 Concrete Restoration Contest.

Although Fisher says his company does an occasional interior floor, 75 percent of his business involves resurfacing exterior areas with integrally colored stamped concrete. He and his sons mix everything themselves, he notes, so they dictate their own schedules.

“Resurfacing can be very cost-effective for the homeowner,” he notes. “It’s very forgiving to landscaping because it doesn’t involve a major demolition. It has a lot of potential.”

For the contractor, he continues, “Opportunities are unlimited to people who enjoy working hard and have the ability to express their creativity with a product that will outlast us all.” 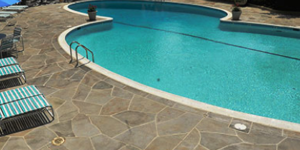 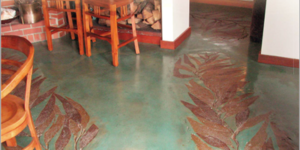 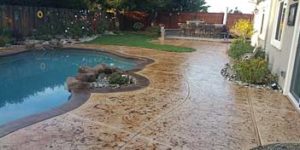