This striking concrete garden path was inspired by the Brazilian jungles — the habitat of the world’s largest snake, as well as a place where concrete is the only hope of keeping weeds at bay.

Though the concept came from the customer, it was Nolan King, owner of King Architectural Concrete and Construction in River Falls, Wis., who brought the idea — all 150 feet of it — to life.

King’s first challenge was to figure out how to create the pattern and texture of a 4-foot-wide snake. Unsurprisingly, there are very few concrete stamps out there designed for making giant anacondas, so King needed to invent his own. “I had to come up with a design that would repeat itself as the path is winding through the woods, slithering like a snake, while keeping the scales centered,” he says.

King used a clay mold to establish the pattern and texture of the snakeskin and, with the help of local concrete design company Milestones Inc., was able to create custom rubber stamps. In addition to the custom stamps, King used two different concrete mixes, seven shades of Scofield’s Chemstain and two coats of Diamond Glaze sealant.

The hardest part of the project, says King, was creating the snake’s head. The concrete had to be very precisely carved and stamped if it was going to flow seamlessly into the snake’s body. The final touches were two hand-blown glass eyes, made at King’s glass studio, Nichka Glass Works, by fellow artisan Ryan Gregory. 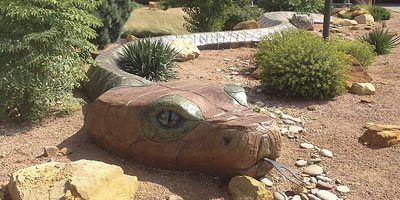