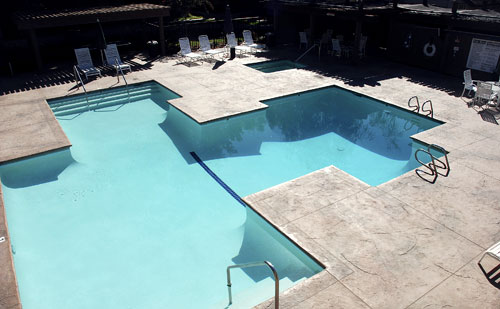 The swimming-pool courtyard should have been an aesthetic focal point for the upscale gated condo community. But the old pool deck was scarred with cracks, and when decorative planters leaked and overflowed from rain, mud ran across the deck and sullied the pool.

Still, more than 200 condo owners at the Timberlake Condominiums in Modesto, Calif., dreaded the expense and disruption of ripping out the 6,500-square-foot deck and rebuilding it.

Then they talked to Julio A. Hallack.

Hallack, president and CEO of Concrete by Hallack in Turlock, Calif., proposed repairing and resurfacing the existing deck with a stamped and stained concrete overlay. For all but one week of the four-month project, he agreed to have his staff of eight professionals work only from 6 o’clock in the morning until noon so the residents could use the pool during the afternoons and evenings. And, Hallack says, “I think we saved them about $70,000 or more by not jackhammering the whole thing.”

Resurfacing the 6,500-square-foot pool deck with a stamped overlay saved time and money — and did it beautifully.

Before even starting to work on the concrete itself, Hallack did some preparatory work. “We installed a couple hundred feet of drains to take water far away from the pool,” he says. His crew linked air-conditioning units to the underground drainage system to keep water from dripping on the new concrete surface and staining it. Then they got rid of the mud problem by removing the planters and pouring 1,500 square feet of regular concrete to fill the voids.

Hallack took several steps to prepare the surface so the overlay installation would be successful. “Microcoatings are very temperamental,” he says. “People really have to know how to prep the subgrade, how to deal with concrete movement and cracks. Otherwise, microcoatings can become a nightmare — they can delaminate.”

Repairing the many cracks in the existing deck was an essential first step. Each crack was opened up with a crack chaser and then filled with Roadware 10 Minute Concrete Mender. The cracks resulted from an insufficient number of expansion joints in the original installation, Hallack says. To better handle the stresses, his crew cut a new system of 1-inch expansion joints throughout the deck, as needed, 8 feet on center.

Filling in numerous birdbaths with Miracote Repair Mortar I produced an even, smooth surface for the upcoming overlay. The condo owners wanted the new deck to be a coherent expanse, so Hallack’s crew also used Repair Mortar I to fill the impressions in 1,100 square feet of existing concrete that had been stamped in a cobblestone pattern years before.

“Prep is the success of any microcoating,” Hallack says. “The profile not only has to be clean, but it has to be open in order for it to take a primer for the microcoating.” The final preparation step in this project was scrubbing the entire deck using a nylon grit brush to remove surface contamination.

It took about 500 bags of Miracote Mirastamp to place a half-inch-thick overlay on the deck. Mirastamp liquid release agent, part of the Mirastamp system, was used on seamless stone-texture skins from Proline Concrete Tools of Oceanside, Calif. After removing the skins, the crew reopened all of the expansion joints, which had been marked with concrete nails.

Applying several different colors of Mirastain II in random, overlapping patterns created an attractive effect. “We started by staining some darkened spots of green as a base scattered around,” says Hallack. “Then we used about four different colors, primarily in the earth tones like adobe, and we used a gray color as well.” Spraying the color was a several-person job, with one handling an electric pump and 25-gallon tank system designed by Hallack, another using the spray nozzle, and others brushing in the stain with very smooth brooms. “A lot of my work is major staining,” Hallack says. “We do about 30,000 to 40,000 square feet at a time. I had to come up with a system that would allow me to spray that much in about four or five hours.”

As a decorative accent as well as a visual warning device, Hallack created a border around the edges of the pool that was similar to the deck in tone but darker. “We beefed up the formula, making the percentage of coloring per gallon much, much higher than normal. We used Mirastain II and brushed it in by hand. It took a lot of time, because I wanted to make sure that we got deep penetration and color reaction.” Two coats of Miracote HD W Gloss Sealer finished off the staining process for the entire deck. The week devoted to staining and sealing was the only time the pool area was completely closed to residents.

Finally, the crew caulked all of the expansion joints with Sonneborn NP1 Polyurethane Sealant. “We filled in about 1,000 linear feet of expansion joints,” Hallack says. “Anytime you do any kind of microcoating outdoors, you need to make sure you don’t leave anything open for water to start going under. Otherwise, you will have delamination.”

Hallack reports that the condo owners and investors were thrilled with the finished deck. “Nobody had any idea how beautiful this was going to be,” he says. Because of all the careful planning, thorough preparation and skillful workmanship, Hallack felt confident when a drainage test was conducted prior to owner acceptance of the project. As he expected, water flows away from the pool, and none is left standing.

“I’ve been doing decorative concrete work for many years, but this is one of the most fascinating projects that I’ve been involved with,” Hallack comments, “because all throughout the nation, we have so many hotels and condominiums and other places that have the same problem: how to deal with some of these add-ons and repairs.”

He is convinced that overlays can be an important solution, especially in places that must remain open for activity during the project. He stresses, however, that success depends on knowing how to prep existing surfaces and apply the overlays correctly.

“There are a lot of rewards when you plan, when you do your homework, and are willing to do it right,” he concludes, “for the client and for the satisfaction.”