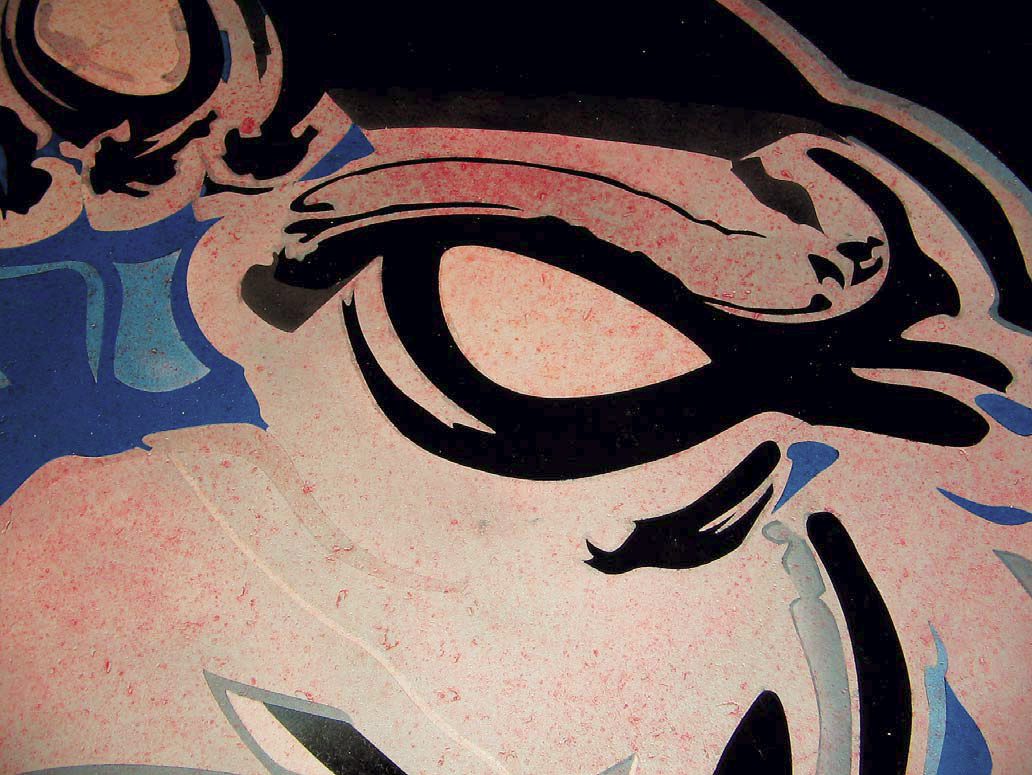 When you’ve just created art on 256 square feet of concrete entryway, you do not want to have it described as a “horse with a rash” two days before the opening of your client’s new retail establishment. But that’s what Tony Victor and partner Ben Washburn were up against in October 2007.

Victor and Washburn co-own Stone Roots Inc. in New Cumberland, Penn., where they specialize in decorative concrete. They’d been commissioned to stencil and stain an immense logo, virtually the first thing customers would see upon arriving at CJ Pony Parts, a dealer of new and used Mustang parts just outside of Harrisburg. For owner Creed Stammel, installing the design would be the final touch leading up to the grand opening of his new location.

“We wanted to focus attention on the entry because, quite frankly, the rest of the concrete flooring didn’t look too sharp,” says Stammel. “We’d tried a terrazzo effect that just didn’t work out.” 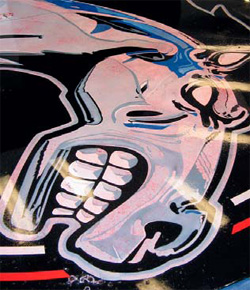 So he asked Victor and Washburn to work from a miniature rendering of a powerful horse — a mustang, naturally — designed by one of his employees.

“We had a 2-inch logo blown up to 256 square feet,” says Victor. The template, provided by Surface Gel Tek of Mesa, Ariz., was shipped in 20 giant vinyl adhesive strips.

“But first, we had to deal with a big red dot,” Victor recalls.

The color had been applied to the entry floor with a solvent stain by another company before Stammel had decided he wanted something a bit more exciting.

“The red stain had been applied four hours before they called us in,” says Victor. “Fortunately, we got to it before they sealed it.”

Still, it took six hours with a power buffer and cleaning agent before the partners’ real work could begin. “We scrubbed till we couldn’t get any more of the red out,” says Victor. 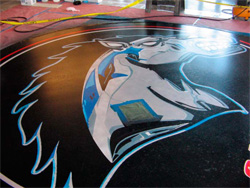 Another day was spent applying three coats of a floor stain from Smith Paints and testing to make sure the color was locked in.

So far, so good. Next, it was time to lay out the stencil, a virtual 20-piece jigsaw puzzle. That took the two of them another eight-hour day.

And finally, the fun part: spraying color. It was incredibly detailed work. If you look closely, you can see a Mustang automobile reflected in the horse. “We worked on that for a week and a half, on our hands and knees,” says Victor.

They went in on that final Saturday to seal, wax and admire their handiwork before the grand opening on Monday.

Because they were working in a high-traffic area, the partners needed a very durable sealer. “So we used a polyurea two-component sealer from Flexmar Coatings, recommended by Smith Paints,” Victor recalls.

It sprayed horribly. The sealer congealed where it hit, giving the art a dimpled appearance. When they returned four hours later, the men looked in horror at a pony that seemed struck with bright red measles. The sealer, it seemed, had been so high-strength it had cut through all three coats of stain and grabbed what remained of the original red solvent out of the floor’s nooks and crannies, bringing it to the surface in blotches.

The first lesson learned was to spot-test everywhere. They’d tested their sealer against patches of black and red stain, but not against the lighter sections. Naturally, that’s where their problems stood out like some dreaded equine disease.

“I sat down on the bumper of my truck, put my head in my hands and tried to figure out how to deal with this without starting from scratch,” says Victor.

First, the partner had to explain to the client — a man whose mind had to be already frazzled by the million details remaining two days before a grand opening — that his signature pony was terminal.

“I had to call Creed up at his car show and tell him his floor was ruined,” says Victor. Stemmel’s immediate reaction was laughter. “He thought I was kidding.”

“The joke,” says Stemmel in recalling that moment, “was that the store had to have been built on Indian burial grounds. But in the end, it’s just a floor. It wasn’t anyone’s fault.”

Victor and Washburn then called Smith Paint. “Their representatives were very responsive,” says Victor. “They showed up on the scene and we all put our heads together.”

After talking to a Smith chemist and a Flexmar expert, they learned that the polyurea they’d used could reconstitute a solvent-based stain, making it bleed and move until the sealer set up. When the sealer was dry, it would be impenetrable.

But once the sealer was cured, it wouldn’t let anything through, so Victor and Washburn could lock up all imperfections under another coat of polyurea.

The partners sanded and rolled on a fresh coat of sealer, eliminating the dimpled effect and giving them a new canvas from which to work. After that, they reapplied a new stencil and stained directly over the sealer, then tested the lightest area with the sealer. No bleeding. It worked. They finished with two more coats of polyurea and waxed the floor for ultimate protection.

It took another 35 hours or so, and the work wasn’t completed for the store’s opening, but that didn’t matter. “We just roped it off and let customers watch us,” says Victor. “In the end the logo turned out better then the first time.”

And they’d fixed the problem in half the time it would’ve taken if they’d restarted from scratch.

All worth the trouble, according to their appreciative client. “It looks great, it’s wearing well and we’re getting many favorable comments,” Stammel reports. “The art is the focal point. These guys did a terrific job.” 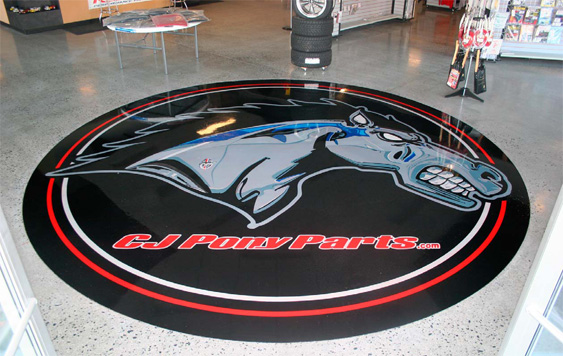 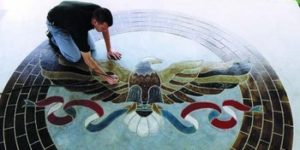 A Picture is Worth a Thousand Concrete Pours 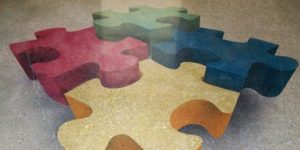