While Phoenix bartenders made their last pours of the night, Peter Boccaccio of Peter Boccaccio Decorative Concrete Design was getting ready to make his first of the day. A 2 a.m. start is the first step to beating the heat on an acid-stain job in the desert.

Boccaccio and other contractors working in extremely hot or cold climates face a range of challenges affecting set, color applications and strength. And they have discrete techniques that work for their own regions.

Boccaccio once created a colored floor on a new home when daytime temperatures were 105 degrees and humidity was next to nothing. The job called for a light-reflective, dry-shake, nonmetallic surface hardener. The surface would be acid-stained in different tones and diamond-polished to reveal some small aggregate. Boccaccio was looking for the metallic salt stain to produce vivid colors from a light-colored concrete.

The mix, at a 4-inch slump, included a mid-range water reducer and polyethylene fibers. The pour commenced at 2 a.m., followed by some techniques that you might not find on a label.

“Standard practice is to broadcast hardener upon bleed-water evaporation and prior to bull floating,” Boccaccio says. “But low humidity speeds surface evaporation and may cause delamination due to insufficient hydration of dry-shake hardener.”

To get the jump on evaporation, dry shake was applied immediately after screeding and bull floating, but before bleed water appeared on the surface. (Notably, thanks to low humidity and water reducers, very little bleed water was evident.) Then he immediately worked the surface again with the bull float. 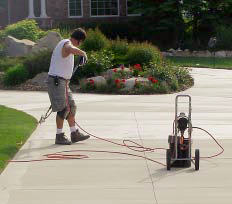 Keep in mind, deviations from standard practice may result in deviations from typical reactions. While applying hardener immediately when bleed water appears is a great way to head off delamination, the color also becomes diluted into the surface layer, rather than forming a distinct color layer, Boccaccio says.

“I cheated a little bit and added some titanium dioxide in front of the pan float. This really lightens the surface,” he says.

Once finishing was complete, the concrete was allowed to harden for three hours. Then wet curing commenced. This started with a manual wetting-down, and continued five hours later with wet-curing blankets. Ghosting from the blankets was not a concern, because surface grinding was on the agenda later in the job. The curing continued for seven days.

Meanwhile, several hundred miles to the north and a proverbial mile higher, Rob Sonders works around winter temperatures in Denver. Sonders, an installer and product manufacturer under the names Stonecrete USA and Surfacing Technology, installs concrete and develops mixes.

The best practice is to wait until temperatures are consistently above 40 degrees without the threat of freezing at night. But in this region, it can be 65 one day and snowing the next. “It’s extremely tough,” Sonders says.

The first cold-climate consideration is strength. Spalling is a major issue in the Denver area because of the high number of freeze-thaw cycles each year. Moisture seeps into the concrete, then freezes. One cycle is not an issue, but several times over a short period of time causes thousands of microscopic fractures under the surface.

Sonders recently commissioned a study by the Massachusetts Institute of Technology, which confirmed that concrete strength in the region should be at a minimum of 3,500 psi. He recommends 4,000 psi when pouring in cold weather. When working around that temperature threshold, Sonders recommends nonchloride accelerators to head off trouble with efflorescence.

Some other techniques are less complicated. “Pick your days,” he says. “Tent when you can, but that’s easier said than done.” Blankets can be rolled over a slab before the temperature drops below freezing, but an acid wash is required to remove the efflorescence.

Mix design can be boosted for cold temperatures with a nonchloride accelerant, Sonders says, but there are limits.

For microtoppings and coatings in harsh climates, Sonders’ company, Surfacing Technology, makes products that include polymers in the mix. The polymers keep the water out and provide some elasticity to absorb the expansion caused in freeze-thaw cycles.

But mix designs can only take you so far when the climate is not cooperating. As with any decorative concrete work, Sonders says, “it comes down to common sense and a lot of experience.”