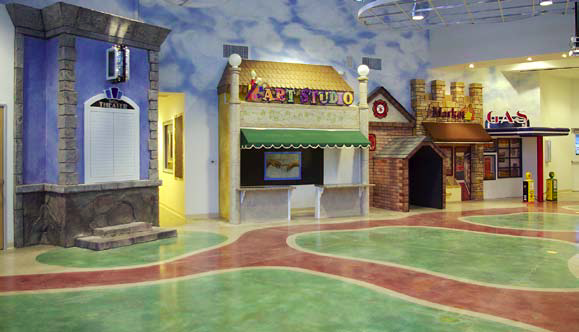 There’s a very lucky group of kids at Bluff View Private Preschool in Fresno, Calif. Thanks to contractor Chris Swanson of Colour and his team, the students now have their very own “city” to play in.

Swanson was approached by Bluff View and its team of architects, who had come up with the initial concept. It was up to Colour to create the final look. “A lot of the creative side was left up to us,” Swanson says. “We were just trying to create a somewhat miniaturized form. We wanted a realistic city with a childlike touch to it.”

The little city is home to about a dozen different buildings, including a post office, costume shop and an oldfashioned gas station. All the storefronts are located along the sides of the room, with streets in the middle for the kids to ride their tricycles on. 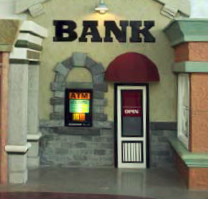 Almost all the buildings were constructed using foam shapes with cement overlays, although a couple of the buildings have basic framing and sheetrock in addition to the foam. They were then textured using stamps, trowels, plaster finishes and hand carving. Because the city is located inside a preschool, most of the coloring had to be done with waterbased stains.

Helping Swanson out with the project was Americrete, which helped with the entire project, and Colledi Designs, which did the signage on all the buildings. All told, the project took around four or five months.

As one might expect, there were several challenges along the way. “We had to work on it during school time, so we had to be careful about the noise we made and the mess we made,” Swanson says. “Some of the design (we made up) as we went along. It can be a challenge at times to create what you think people want.”

In this case, Swanson’s understanding is that the kids love it. He said there were a lot of parents coming up and talking to him about how excited the kids were. “It’s definitely a very unique little place,” he said. “It’s been a real discussion piece in Fresno.”