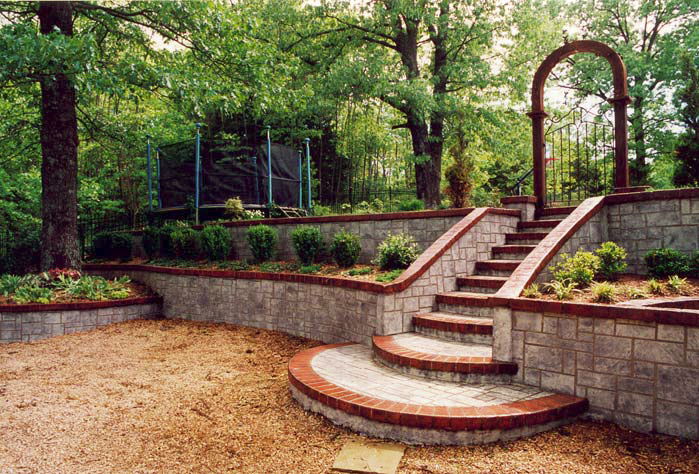 Although aesthetics are certainly a key component in any decorative concrete project, that doesn’t mean function should take a back seat. When a Joplin, Mo., homeowner was experiencing drainage and erosion problems, Jim Snodgrass installed a series of walls and stairways that not only controlled water flow, but was visually pleasing to the rest of the high-end subdivision.

“The poor elevation made this the worst water control project I’ve had to adjust,” says Snodgrass, who shut down his installation business, Ozark Decorative Paving, in 2005 to focus on Decorative Concrete Impressions LLC, a manufacturing and distribution company he founded in 2001.

The home is located at the bottom of a ridge, and actually sits beneath street level. After a rainfall, rainwater from the entire subdivision would run down the driveway and through the yard.

In addition to fixing the drainage issues, Snodgrass also had to work around the existing driveway.

“Access (to the site) was a problem because of the steep grade,” he says. “Just getting the trucks in and out was a challenge.”

To correct the water flow problems, Snodgrass had to add nine feet of elevation. A staircase was placed between two 9-inch thick walls that were 3 feet in height and allowed for landscaping on an upper tier. Additional walls were installed to retain soil around trees and other landscaping. On the ground, Snodgrass installed nearly 1,000 square feet of flatwork, including a drainage system for additional water control, plus an overflow path to channel anything the drains couldn’t handle.

Created using materials found in the Decorative Concrete Impressions catalog, the patterns and colors were inspired by the gray ashlar stone in the home’s two-story front entryway, as well as by the prominent red brick. The work was accomplished using the Ashlar Tile stencil with Dove Gray color hardener. The borders feature Brick Red color hardener and a Brick Header stencil. “Stencils allow you to create differently colored borders in one pour, so we tied into the home’s design and color without extra forming,” Snodgrass says.

The vertical surfaces were achieved using the same stencils and an overlayment material. Once the basic walls were poured and the forms removed, the facing was coated in one layer of overlay, and while the base coat was still tacky, the stencil was applied. Then a topcoat was troweled onto the surface and textured using a flat texture mat.

Despite the challenges, the hard work paid off. The homeowner never reported any additional drainage problems.