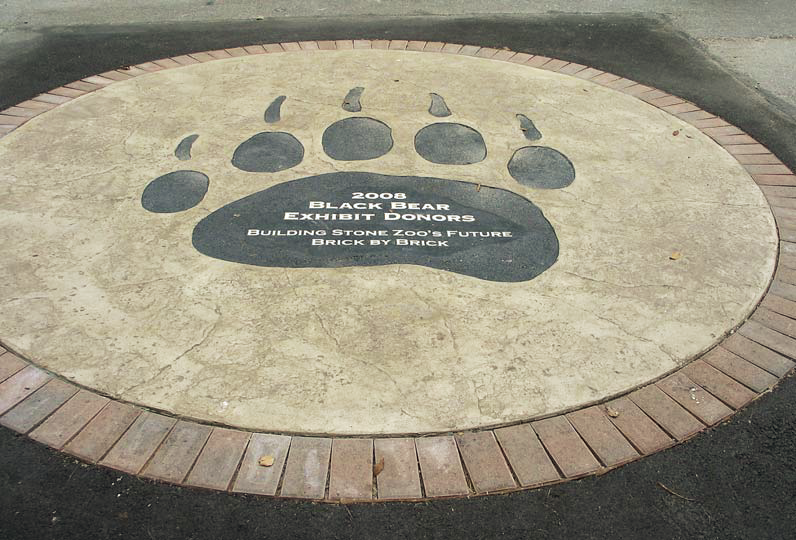 Bill Guthro may be one of the top decorative concrete specialists in New England today, but his beginnings in the industry had more to do with muscle power and output than artistic talent.

Raised in all-boy Catholic schools outside Boston, Guthro planned to become a lawyer until he got hired on a summer construction job, where he dug trenches, shoveled concrete and moved heavy wheelbarrows around all day. He loved it, and at $5 an hour, he says, he was making huge money at age 16.

He dumped the law school idea and joined a construction crew, becoming a journeyman in the Carpenter’s Local Union No. 26 in 1989. In two years, he had worked his way up to foreman on huge industrial projects around Boston, including the Ted Williams Tunnel and the Deer Island Treatment Plant.

But after a while, the backbreaking work and emphasis on quantity over quality got old. His concrete work on the Ted Williams Tunnel was buried underground, and people drove by his bridge work at 65 miles an hour. By 1999, he was thoroughly bored and dreaded going to work in the morning. “I don’t know if I had a midlife crisis early or something, but I just grabbed my tools and told the guy I quit.”

Then he went home and waited for his wife to arrive, so he could break the news to her. (They’re still married, by the way.) What followed was six months of traveling to various classes on decorative concrete techniques and a new business, Distinctive Concrete, based in Rowley, Mass.

At the time, only a few contractors were doing anything with decorative concrete around Boston. “I thought I would be the stamped-concrete guru,” Guthro says.

The next phase in building his business was educating architects and builders about the range of possibilities available to them, which wasn’t always an easy sell. It’s even more difficult to persuade customers in this historic area to try new looks. 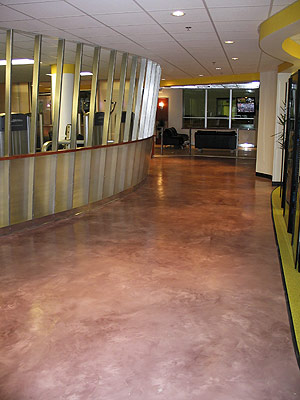 Guthro stuck with it, concentrating mainly on stamped work with a crew of three or four during the eight months of good weather. He expanded into stain work and interior overlays, and at one point had 13 guys working for him. But with every new business there’s a learning curve, and Guthro had to make changes when he found he was keeping the crew busy and not making enough money. Now, Guthro works on his own, not only to keep his payroll in check, but also to maintain the artistic integrity of his work, hiring day laborers or other friends in the trades if he needs help. He’ll also help out a friend in the industry who may be great at one part of the job, but not another. “It works for me, and it works for them,” he says.

Clients include hotel chains, retailers, local municipalities, sports fitness clubs, local restaurants and hundreds of residential customers over the years. He now focuses on interior commercial floors, with clients who are going for high-end looks with acid-stained floors and microtoppings.

One of Guthro’s favorite jobs was a small, outer-space themed park he helped create within a housing development for the Boston Housing Authority. Imagine concrete domes of different sizes representing the planets, and glass embedded in black pavement to conjure up the Milky Way. Guthro used his form-making skills to create realistic-looking planets, and he enjoyed the artistic challenge and complexity of the job. “Everyone was blown away” at the results, he says.

Guthro is also a consultant and distributor, and he often advises other contractors to be selective, even in a down economy. “If you see a job with red flags all over it, just walk away.” Some contractors are so driven to work that they forget that they could lose money on certain jobs, he says.

He calls himself an “optimistic realist” about the projects he takes on. He gets some of his work from architects who add his firm to the job specifications, but he has to make sure the job makes sense. He’s seen acid-stained floors planned for a restaurant, but no sealer added to the specs.

And working with interior designers can be frustrating because they’re working with a vision in their head, but no specifics. “I can’t get inside your head and see what’s in there,” Guthro says. He will help the team form a new game plan. “I want to make sure at the end of the job that you’re happy, and you’re happy a year from now. Sometimes I have to take them by the hand and walk them down a different path.”

As a distributor, Guthro rides herd on manufacturers to ensure their claims are more than just claims. The technology for decorative concrete products is constantly changing, and to keep up, Guthro does his homework — interviewing the distributors and installers about various products, then going to the manufacturer’s site to be set up with tools and a “playpen” so he can experiment. “My guys are relying on me. I tell manufacturers that I’m a pretty straight shooter. Don’t talk to me like a salesperson.”

Over the years, he’s developed strong relationships with the lead technicians to learn new tricks and techniques that he can share.

Guthro admits there are times when he misses his old 7 a.m. to 3:30 p.m. workday, with his union-mandated 9 a.m. coffee break and half-hour lunch. But now he likes the thrill of “nailing the job just right,” when the owners are ecstatic and the phone is ringing from referrals. “I’m competitive. Being OK isn’t good enough. I want it right every time. If I have to tear it out, I tear it out.”

In the winter, he indulges his curiosity, as part scientist and part artist, to try new things. “I do love the business, because there’s so much you can do with the material.” And the opportunities to learn more never end, he says. “In this business you have to adapt, and always try to peek around the corner to see what’s coming next.”