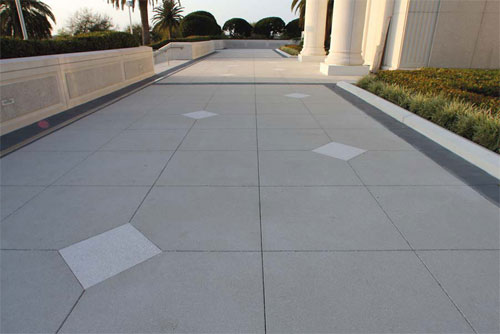 The Church of Jesus Christ of Latter-day Saints Temple in Windermere, Fla., is a magnificent structure. Opened in 1994, the 70,000-square-foot temple sits on 13 acres and serves LDS members not only from Florida, but also from neighboring states and several Caribbean Islands.

The first LDS Temple to be built in Florida, the structure is perhaps best known for its dazzling pure white exterior made of precast white concrete and marble chips. To keep the temple sparkling white, the facade must be cleaned on a quarterly basis.

However, the lift that holds the pressure washer is extraordinarily heavy. Over the years, the weight began to destroy the original walkway, which was made of concrete pavers. It was eventually determined that a new walkway had to be designed and installed to withstand the weight of the lift and washer.

When David Edwards, president of Edwards Concrete Co., went to take a look at the job, he bumped into John Walker, the project manager for LDS building jobs in the Southeast, and the two men began to talk about finding a better alternative to the pavers. LDS had a very tight deadline, Edwards says, and church leaders were skeptical that the contractor could meet it.

Another issue that made this project a unique challenge is the LDS church's view on what they wanted. "They look at things a little different than other clients," Edwards explains. "They wanted a surface that is going to last 150 years."

The Winter Garden, Fla., contractor and LDS brainstormed on some ideas and began pouring samples. It was decided the best solution would be a thick, solid slab of concrete.

The next challenge was to find a concrete mix that would complement the white exterior of the temple. The natural stone in Florida is limestone, Edwards says, so a mixture of Bomanite and crushed lime rock was developed, making concrete that was extremely white.

Work on the 36,000 square feet of walkway officially began on Jan. 9, 2008, after, as Edwards says, "We got over the hurdle of what the concrete would look like." 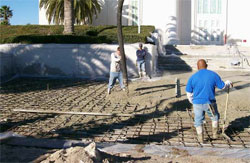 The concrete was poured 9 inches thick, strengthened with No. 5 rebar on 12-inch centers and cut into 4-foot squares. The concrete and reinforcement was designed to withstand the lift for the pressure washer, which Edwards says weighs 35,000 pounds. In all, 753 cubic yards of concrete were poured over 34 tons of steel. A decorative saw blade was used to cut the lines. "There won't be any problems with the squares," Edwards says. "There won't be a single uncontrollable crack."

To match the facade of the temple, 2-inch diamond shapes were cut out of the concrete with and replaced with marble chips in Bomanite Aggretex. Each 2-by-2 diamond had to be chipped out by hand using chipping hammers, and afterward, it was all sealed with a solvent-based sealer. To ensure perfect-looking cuts, the tool Edwards Concrete used gave the cuts a concave edge, which added a shadow line. Some of these cuts were up to 240 linear feet long. All in all, the project required more than 10,000 linear feet of saw-cutting.

Parking concrete trucks at the temple was impossible, Edwards says, because of the logistics of the building site and LDS-related restrictions, so a boom pump was used instead to pump the concrete to the site.

About 20 employees from Edwards Concrete worked in shifts, alternating between different parts of the project (subcontractors were used for the rebar work and the boom pump). One day, they would pour a section of the walkway, and the next day they'd do part of the bands that created borders around each 4-foot square. The bands were made of regular-grade concrete with a charcoal color hardener. This created a picture-frame look around the exposed lime aggregate finish.

Once a section was set, Grace Top-Cast chemical retarder was applied to expose the limestone aggregate. Because concrete sets from the bottom up, Edwards explains, adding the retarder delayed the hardening of the membrane on top of the concrete. "The next day, we would come back and wash that top layer off, which exposed the aggregate and the sand and other materials added to the mix, giving the surface its unique look."

Being able to have parts of the walkway ready for use as soon as possible was imperative to the overall project. After all, while the concrete work was taking place, the temple needed to remain open. So work on the entry area was given priority. And that led to what was perhaps the biggest challenge of the project, according to Edwards. "

This temple is used mainly for weddings and special ceremonies," he says. "We were on the project for only a short time, about a week, when on a Wednesday we were told there was going to be a wedding taking place that Saturday."

The church leaders planned to put down a plywood walkway, but Edwards didn't want to see that happen. The wedding party expected to stroll along a beautiful walkway, not through a construction zone. So Edwards Concrete stepped up production, working every hour possible, and when the wedding ceremony took place, 5,500 square feet of walkway at the church entrance was finished, and, Edwards points out, the bride did not have to walk across a makeshift plywood sidewalk.

This was the moment that proved to LDS leaders that Edwards Concrete was a company that could produce high-quality work in a timely manner.

"The LDS leaders were upset with the original walkway project because it was poorly done from the beginning," Edwards explains. "We came in with a very detailed schedule and detailed plans, but leaders were skeptical that it would work."

Church leaders were involved in every step of the project, inspecting the work on a daily basis. The leaders were also very pleased with the final product, Edwards notes, largely due to the company meeting the wedding deadline. 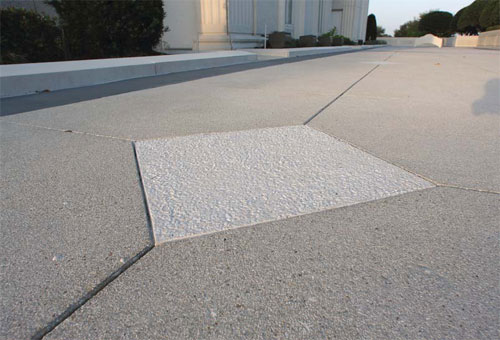 "Working with a church is another challenge that made this project different from working with other clients, like theme parks," Edwards says. "In a church, everyone's opinion counts, and you have to take all of those different opinions into account while planning the project."

Nearly 3,700 labor hours were spent on the project, which was completed on April 11, 2008. There were no injuries on the job site, a remarkable feat considering the scope of the project. Edwards Concrete Co. has been in business since 1982. In 1988, the company became an official Bomanite franchise partner

Edwards Concrete specializes in colored stamped concrete, developing walkways, patios, interior flooring, driveways and courtyards, among other projects. The concrete company has worked on residential, commercial and municipal projects, as well as for Florida theme parks such as Disney World and Sea World.

A Concrete Spread at a High-end Central Charlotte Restaurant 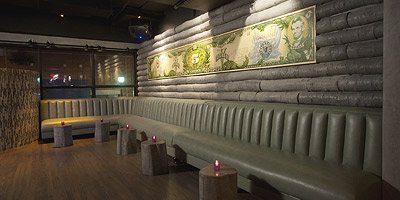 Inside, decorative concrete that resembles Venetian plaster is troweled on some walls while molded log tiles made out of glass-fiber reinforced concrete (GFRC) cover others. Huge columns shaped to look like intricately crafted wooden chair legs were designed with a CAD program, fashioned out of foam and chicken wire, and covered with troweled-on white concrete

Contractors Get Ready to Transform the Underground Concrete House in Oregon 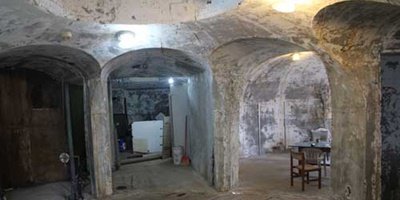 As you can see from these "before" photos, the house is a unique concrete dome home with a lot of potential. It's normally covered with earth, and for most of its history, it served as a residence for ministers who served the church across the street. 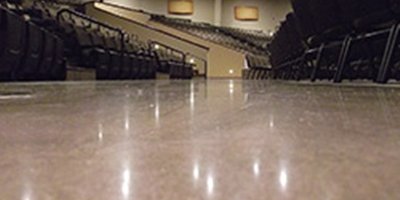 The new worship center at the Family Christian Center in Clermont, Fla. isn’t your grandfather’s church. It boasts sleek lines and contemporary design. 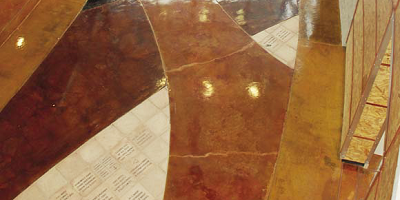 When Adobe Coatings of Mesa, Ariz., was brought in to create new concrete floors for Christ's Greenfield Lutheran Church in Gilbert, Ariz., the original plan was to use acid stain for the entire project. One hitch: The 11,000-square-foot project included some balcony space.