Green was a hot topic at this year’s World of Concrete show. It seemed that every exhibitor had some mention of green in their displays. In some cases this seemed to be little more than lip service, but in other cases, some very real steps are being taken towards greener concrete. And then there was Calera – a very big, very exciting idea that could practically turn concrete into the solution to global warming. Seriously! I’m saving Calera for last, so keep reading.

First for the disappointing part. The World of Concrete’s GreenSite was intended to showcase the best of the sustainability efforts being made across the concrete industry. However, this special area of the show was a series of tiny booths tucked in the very back of the second floor of the South Hall. I doubt that many visitors ever made it that deep into the hall, and even if they did, there was little to see and no one to talk with. I hate to pick on what was a good idea, but in the end GreenSite seemed to be little more than an afterthought.

Another problem with GreenSite was that many of the companies that apparently paid extra to be included were no greener than many other companies throughout the show. There were companies that make cardboard form tubes from recycled paperboard (as does every other tube form maker), a manufacturer of foundation drainage boards (a great product, but I’m not too clear about what’s particularly green about it), and DeWalt power tools. I like DeWalt tools and use them myself. They are great tools. But I’m not sure how they are any greener than any other tools. All of the companies in GreenSite probably have some commitment to green principles, but so do hundreds of companies.

On the positive side, GreenSite had some interesting free presentations – but again, attendance was sparse. There was also a GreenSite luncheon to review sustainable techniques and materials, and this drew about 80 people. A panel of experts discussed how to implement green concepts in concrete design and construction, and the GreenSite Projects of the Year were recognized, including the Aldo Leopold Legacy Center, the Wisconsin project that is the only one ever to have received 61 of 61 possible LEED points.

Meanwhile, there were some truly interesting green products around the show, if we accept that making concrete greener can be as simple as making it more durable and lightweight and incorporating more recycled materials. All those things contribute, and a lot of these small steps add up to a large step.

Take Elemix, tiny nonabsorbent polymeric spheres that are added to concrete. Compared to typical concrete, the result is lighter in weight (about 120 pcf versus 150 pcf), has a higher R value (about 25 percent higher) and has increased durability because it is less permeable. Not only that, the “ball-bearing” effect of the beads allows the concrete to be pumped and finished easily, and it can be proportioned to get all the structural properties required. Traditional lightweight concrete uses lightweight aggregate that needs to be soaked at the ready-mix plant and that can be difficult to work with due to the increased water demand – leading to scaling and shrinkage. Elemix has overcome that problem at a price that is competitive with other lightweight mixes. “Would a ready-mix producer charge a premium for this product? The answer is yes,” says Debra Van Holst of Nova Chemicals Corp., which makes Elemix through a subsidiary, Syntheon Inc. “But ready-mix producers currently charge a premium for lightweight structural concrete because it is more expensive to produce and handle. One of the attractive things about Elemix concrete additive is that it is significantly easier than lightweight expanded aggregate to store, handle and use in concrete.”

Another interesting material on display at WOC was Ekocrete. This new kind of concrete uses crushed recycled concrete as aggregate. A high percentage of fly ash, some cement, and nanofibers for reinforcement are added to produce concrete with compressive strength of between 2,000 and 10,000 psi. It finishes like traditional concrete and can be colored, stained or stamped. Ekocrete says that 90 percent of the material is recycled. Currently, Ekocrete comes in 50-pound bags available from Buddy Rhodes Artisan Concrete, although they expect to soon begin working with select ready-mix producers. “Ekocrete is stronger and easier to work with than traditional concrete,” says Berkeley architect Rachel Hamilton. “I plan to use it extensively in my future jobs.” This material may have limited use unless they can figure out how to make it using local materials, but the idea is certainly sound.

And then there is Calera, which, if successful, could make concrete a net consumer of carbon dioxide rather than a producer. Can’t you see the headlines? Concrete saves the planet! The brainchild of earth sciences expert Dr. Brent Constantz, Calera’s process combines the flue gas from a coal-fired power plant with seawater to create a new kind of cementitious material that is similar to the material ocean coral uses to create its hard skeleton. The effluent from the Calera process is clean air (with a normal carbon dioxide level), demineralized water and a supplementary cementitious material. This may seem like a pipe dream, but Constantz is not some wild-eyed professor: He made a fortune by inventing a rapid-setting cement that is used in nearly every operating room in the United States to set fractured bones. The primary investor in this company is Sun Microsystems founder Vinod Khosla, and Calera’s technical team includes the likes of Terry Holland, former president of the American Concrete Institute and a highly regarded international expert in concrete chemistry.

Currently operating a pilot plant adjacent to California’s Moss Landing Power Plant, Calera is testing and refining its materials. The basic idea is that rather than trying to reduce or somehow dispose of carbon dioxide, why not use it as a raw material for a manufacturing process? “The goal is not to replace cement,” says Constantz, “but to store carbon dioxide in the built environment and lower the carbon footprint of concrete.” The cementitious material created by what Calera calls carbonate mineralization can replace a large percentage of the cement in a concrete mix and can also be used to create a synthetic aggregate that sequesters even more carbon dioxide. In the extreme case, this can all add up to concrete that actually consumes much more carbon dioxide than it produces.

Calera plans to have a full-scale plant operational within a few years and multiple plants worldwide within 10 years.

So green ideas were everywhere at World of Concrete 2009. Let’s hope the difficulties can be solved and concrete can emerge as the world’s greenest building material. 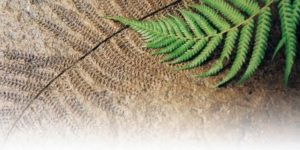 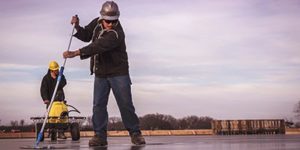 How to Go Green in Decorative Concrete 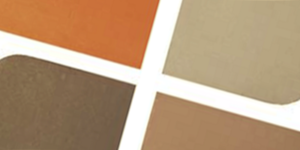