After serving in Vietnam during 1967 and 1968, Rick Ogden lost contact with nearly all of his fellow soldiers.

But more recently, Ogden has not only rediscovered old friends from his company, but also changed the mind of a few concrete skeptics.

It started when Ogden, owner of Rick Ogden Construction in Pryor, Okla., told one of his old buddies that he would create a concrete table for him, featuring their company’s insignia. 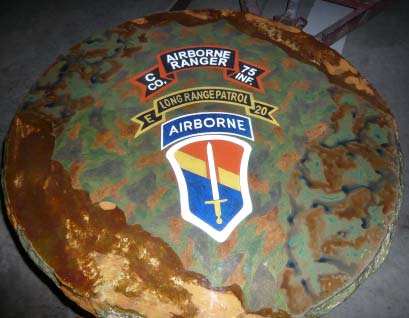 However, after pictures of the table were posted online, other veterans contacted him to say they wanted tables of their own – whether they served with him or not.

“Since that time I have been making these tables for the guys that I was in Vietnam with that were in my unit, and some guys I didn’t know,” he says.

Each table is customized with the recipient’s company insignia. During Ogden’s service, his unit was known as the E Company 20th Infantry Long Range Patrol. However, its name was changed to C Company 75th Infantry Airborne Rangers the year after he was discharged. 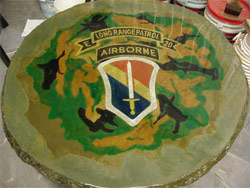 Ogden has made 16 tables in all, each free of charge, and is in the process of creating another one for the Ranger Hall of Fame at Fort Benning, Ga. Each table is 2 inches thick, 33 inches in diameter, and weighs 125 pounds with its base. Ogden uses Surface Gel Tek to create the logos. The tables are topped with either epoxy or polyurea, depending on if they will be displayed inside or outside.

Ogden also sands and buffs each table. “Number one, it makes them smooth like marble, and number two, they are a little more scratch-resistant,” he says.

Although Ogden has certainly gotten a lot of joy out of creating the tables, the most rewarding part for him is reuniting and sharing experiences with his acquaintances. He has gone all over the country to personally deliver the tables.

“It’s nice … to reacquaint with and meet guys I didn’t know that had an equal or similar experience,” he says. “It has been a soul-fulfilling deal for me. In taking these tables to these very real combat heroes, I have seen a look in each and every one of these men’s eyes that exposed the pain that they have suffered but also the integrity of their experiences. Without my decorative concrete skills, this awakening experience would not have happened.” 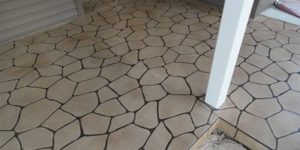 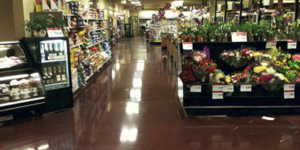