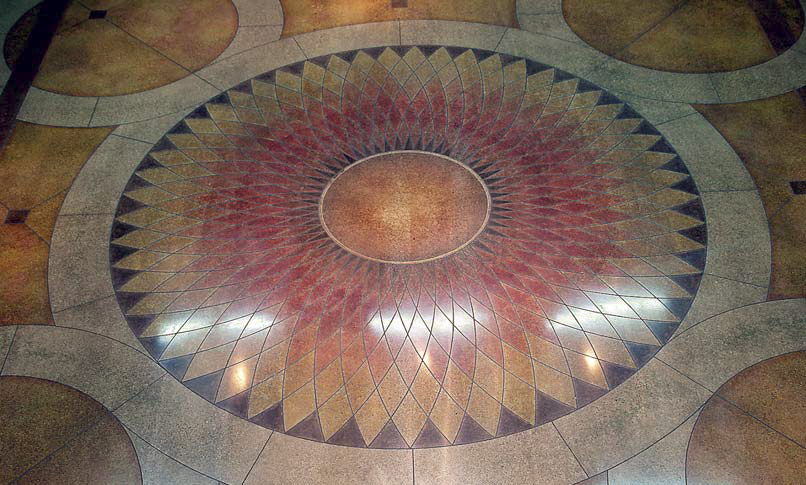 To the father-and-son team of Jim and Chris Swanson, nothing beats peeling back an old, moldy carpet and finding a gem beneath.

Both men love discovering the aged outlines of nail and bolt holes, electrical boxes, stray bits of wood and other ghosts of construction and time that have made their presence known in the decades since a concrete floor was installed. The more scars and pits defacing the floor, the better, says Jim, the elder partner in Colour, of Placerville, Calif. "The blemishes and imperfections add character. In fact, I think old floors look better than new pours.

"That's one reason the Swansons, along with partner Jamie Schneider, have specialized in polishing concrete floors instead of coating them.

Jim and Chris have strong feelings about polishing versus coating concrete. Coatings seal in moisture, they say, which eventually results in increased maintenance, coating failure, and a need to replace the floor system. "You're constantly stripping and rewaxing," says Jim. With polishing, on the other hand, "there's very little maintenance."

And finally, Jim says, polishing is a 100 percent green process that's VOC-compliant from beginning to end.

Jim Swanson is an Akron, Ohio, native. Planning to go to Australia after release from military service in 1969, he had gotten as far as Mark Twain's celebrated Calaveras County in California when he met his future wife, Sandy, at a firemen's ball. Enjoying the weather almost as much as the girl, he forgot all about the "land down under" and set down roots in the foothills of the Sierra Nevada. 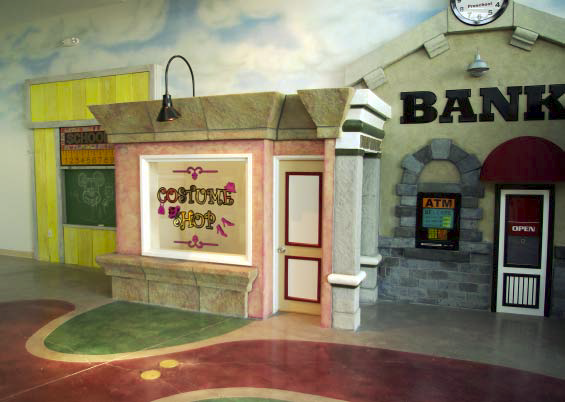 He got his real estate license, raised a family and met his and his son's future business partner in the Golden State."

Jamie, my dad and I all have backgrounds in real estate and construction," says Chris. "So eight years ago we bought a rundown house, a real neighborhood eyesore, and went about fixing it up for resale."

The investment was intended in part to fund the Christian ministry goals of Jim, an ordained minister, and his son, a licensed minister. Their long-term plan still includes founding a youth center with the proceeds of their "buy, renovate and sell" activity, but the failing economy got in the way and derailed them at least temporarily.

In the meantime, they picked up a thriving trade. As is often the case with entrepreneurs, the work that the Swansons and Schneider do today deviates greatly from their original plan.

Even now, the two men can't really explain why they decided to go with concrete countertops in the kitchen of that investment property except that, in Chris's words, "It sounded like fun."

When the neighbors dropped in to tour the newly refurbished home, they immediately focused on those eye-catching counters. Very few contractors in that part of California were decorating with concrete back then.

"When we started doing decorative concrete, we were not yet aware of any local suppliers such as Spec-West in Sacramento," Jim recalls. "We ordered everything online from back east."

The self-taught artisans so impressed their curious neighbors that phone calls started coming in almost immediately. "Everyone wanted us to install concrete counters for them," says Chris.

While the first few nibbles came from homeowners, the partners eventually settled on a primarily commercial customer base. They regularly get calls from architects working on behalf of commercial, retail and institutional properties. While Schneider still does general contracting, the other two devote all of their talent and energy to decorative concrete.

It was Chris who came up with the name Colour, with its British spelling, on something of a whim. "I thought it looked more interesting that way," he recalls.

The company is in negotiations to assume its first medical project, the cancer center of a leading area hospital system. The project would serve as a perfect example of the benefits gained with polished concrete. "They've been using terrazzo in the past," says Chris. "But they saw that terrazzo is more expensive and higher maintenance, and they'd have to close the lobby for a month to work on it versus only a week with polished concrete.

Wax-free polished concrete is appropriate on all kinds of flooring in medical settings, except in surgery rooms and other areas where blood spill is expected. Those areas must be sealed in order to have complete containment. "We offer an incredible savings in labor and chemicals," says Jim.

Chalk and cut
Chris Swanson works either with his own chalk-drawn designs or by shotblasting or sandblasting through stencils made by Colledi Designs. Even in cases where the client supplies the pattern, there's often a chance to add creative touches. For instance, on a project for The Campbell Soup Co., Swanson stenciled the logo but added a shadow-drop border to give the art a raised appearance.

When coloring, the team uses basic dyes from AmeriPolish, but Chris adds "other tricks," according to his father, to suspend the color a little longer and make it float, giving it an apperance almost like acid staining for a more distinctive look.

"On occasion, we do small-scale samples of what we want to do, but 75 percent of the time we're given a license to create," says Chris. "I'll chalk a design on the floor, then get their okay."

Jim Swanson tells of a church whose leaders trusted Chris to install a design of his choice, based solely on portfolio photos and the raves of former customers. "They said when they hired us that they'd seen our work and had talked with a competitor who told them that Chris was the best color concrete artist in the country," says Jim.

One recent commercial building project illustrates a typical workday for the Colour crew. A floor poured nearly 100 years ago had been cut up, raised, lowered and repeatedly patched for nearly a century. "It looked like a jigsaw puzzle," says Jim.

"We had to rip out a moldy carpet, then use a grinder to remove two or three coats of glue," says Chris. After major patching, leveling and crack repairing, they applied a concrete densifier from VersaFlex Inc. to tighten the pores in the concrete. They laid out a design, then colored and polished the floor. The final step was a stain-guard treatment. The Colour process includes the buffing of the floor with a specially designed pad from HTC Inc., their supplier of grinding equipment. Twister pads are embedded with thousands of polishing diamonds that clean and polish the concrete in a single swipe. That's the only maintenance step, along with mopping up standing spills in reasonable time, that the Swansons recommend. 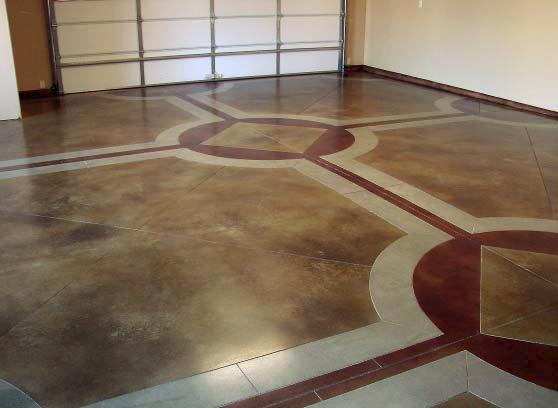 Beauty in the eye
To the Swansons and Schneider, loyalty is as vital a component of their business life as it is within their shared Christian faith. That's why they've maintained close ties to an extensive team of suppliers, which includes VersaFlex, stencil-maker Colledi Designs, California-based supplier Spec-West Concrete Systems, and HTC. As Chris Swanson states in an e-mail, "All of these people have been wonderful to us and we have much more than a business relationship with them; they've all become good friends of ours. Doug Knode has had an influence in my life and has taught me many things over the years. But he has been much more than a teacher, he's been a friend and he means a lot to me and my family."

And all share the Colour passion for finding and enhancing the natural beauty hidden deep within the pits, scars, blemishes and water stains of a weathered slab of concrete flooring.