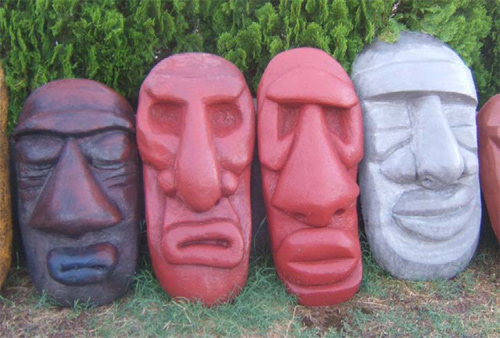 Inevitably, after shotcrete professionals have finished, there's a bit of mud left over. Usually, it's discarded.

But Benjamin Bobinac, a Phoenix, Ariz., foreman who has worked at Fisher Shotcrete Inc. for a dozen years, is one of those guys who messes around at the end of a job, shaping little statues - mostly heads, in his case - out of the leftover concrete. At first, he'd just leave them for the customer. "We always called it shotcrete graffiti," he says. "We had to leave the mud on the job. The builder has to take it away. You might as well make something out of it." 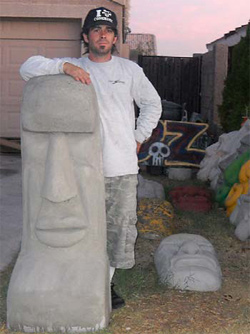 One day, a client called Bobinac's boss to complain that a statue he left behind had cursed her new pool. She even threatened to not pay for the job. Bobinac stopped leaving the heads - but builders started asking for them. Then, another customer complained. He had expected Bobinac to give him one of the heads. He even brought Bobinac back on-site to make more.

It seemed like the more heads Bobinac made, the more heads he turned. So in the past few months, he has started calling it a business: Headz Decorative Concrete Sculptures. He sells them from yard sales at his home and at art events such as Phoenix's First Friday. Friends have put them on Craigslist.

Bobinac, 34 and with the self-described demeanor of a "little skateboard kid," makes heads of all sizes and in a growing number of styles. He started with big-lipped ones and has moved on to Easter Island styles, Jack Skellington heads, oblong faces for hanging, little skulls and so on. Sizes range from "one-bucket" heads that start at $25 to a behemoth that weighs 1,000 pounds and was priced at $300. His standard big heads go for $150 to $200. They can replace fake rocks in pools, landscaping, behind waterfalls and in waterslides,he says.

Bobinac essentially charges only for his crafsmanship, because he still gets all of his raw material from the leftovers at shotcreting jobs.

These days, he collects the extra mud in a children's swimming pool, then transfers it to buckets in the back of his truck. He places one bucket of mud, he says, then a "railroad track of rebar," then more mud on top. He pats it down to shape and settle it, then uses a slick trowel with rounded edges and a margin trowel to sculpt. Finally, he dips a paintbrush in water and smooths any rough edges.

If he can snag leftover integral color on the job, he'll throw some of that into the mix. A bit of brown inspired a small tiki head. He even scored a half-bucket of green concrete from a free Cheng Concrete workshop at a local Home Depot.

Some heads Bobinac keeps. For example, there are about 30 big heads in his backyard, some with chalked-on lipstick and eye shadow applied by his oldest daughter.

Bobinac colors and seals some of his work himself, but his customers have been known to do their own painting too. He's hoping they will send him photos of how they've displayed and decorated their heads.