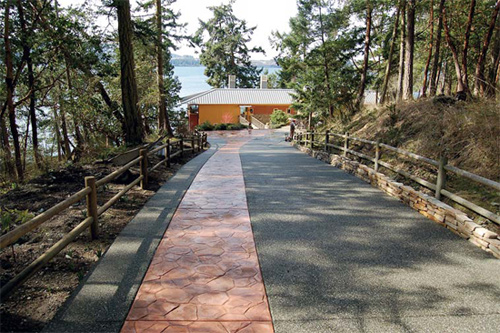 Nobody should have ugly concrete. That’s Colin Hiday’s motto, and he lives by it no matter what kind of concrete he’s working on – decorative or otherwise. “I won’t pour a 4-by-4 pad unless it’s pretty,” he says. 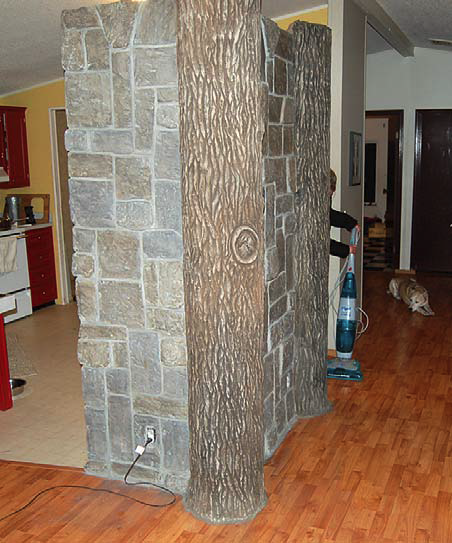 The 30-year-old concrete artisan learned his pride in craftsmanship from his father, long-time concrete contractor Dave Hiday, 57. The two have been working together since before Colin was as tall as the shovel his father had him digging foundations with. By the time Colin was in his teens, he was setting forms and pouring concrete like a pro. “The only reason I’m any good at anything is because of my dad – he instilled in me the basics of doing it right,” Colin says. “My dad can build anything out of a form, and he’ll do it perfectly. I grew up learning from that.” 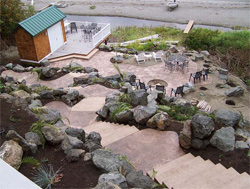 The father and son work as business partners today in Hiday Concrete, which does a full range of high-end commercial and residential work, from the fundamentals to the fancy. Based in Sequim, Wash., a small town in a rapidly growing part of the Olympic Peninsula, the company keeps three workers employed full time, in addition to the Hidays. 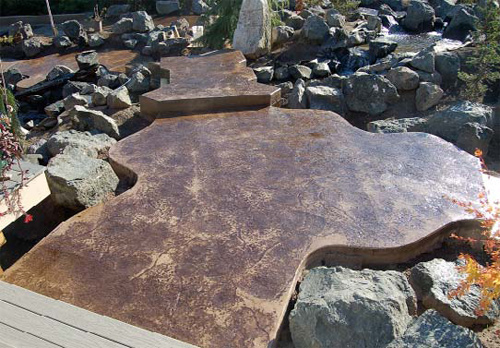 Colin and Dave’s respective interests and talents complement each other nicely. While Dave continues to focus on foundations and structural matters, Colin has gone deep into decorative concrete.

“I’m more of a carpenter,” says Dave. “Colin’s the creative one.” 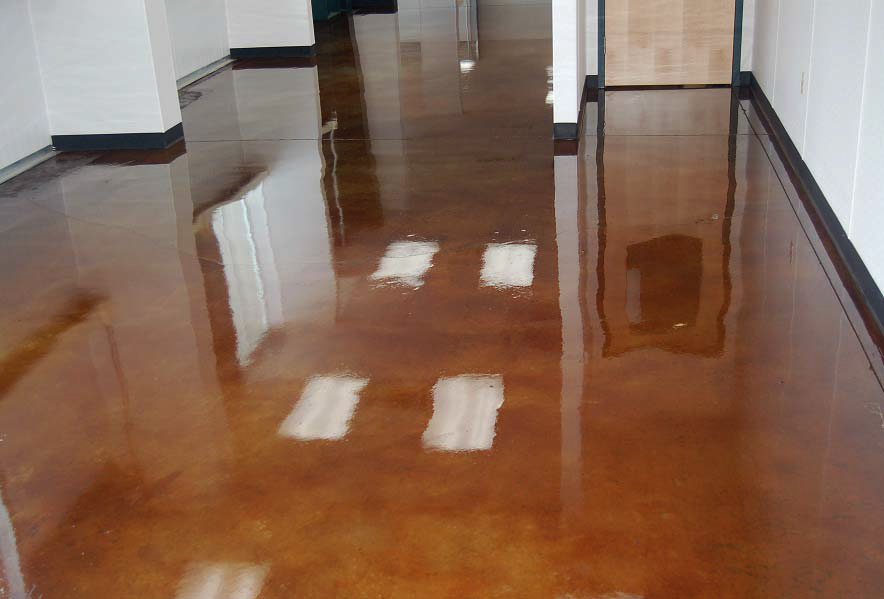 Colin’s interest in decorative started with exposed pea gravel, curved joints and other classic decorative elements, then grew to include new-school tricks like stamping and staining. To stay on top of the latest developments and away from ugly concrete, Colin and Dave began attending the annual World of Concrete trade show in Las Vegas. There, Colin discovered vertical applications and the world of possibilities Flex-C-Ment offers for carving faux vertical surfaces. After taking a workshop by the late Wayne Sellon, an innovator in vertical decorative concrete, Colin came away with both the skills he needed to start taking concrete up the wall and an even more in-depth interest in doing so. 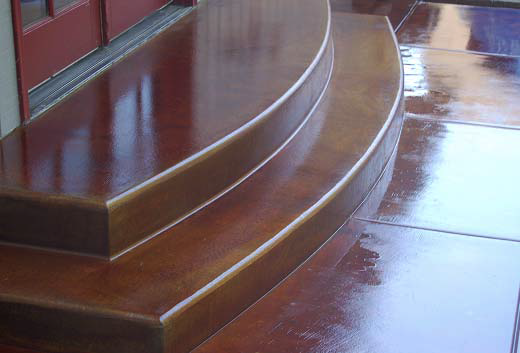 And the buzz around Hiday Concrete’s verticals is growing in other ways, too. Early this year, Flex-C-Ment named the company “Installer of the Month” for a job it did at the Jamestown S’Klallam Tribal Center near to the Olympic Peninsula. A pedestrian tunnel runs beneath the highway that cuts through the tribal center campus, and the tribe worried about cars going over the edge there.

So, it hired Hiday Concrete to create a traffic barrier – but not just any traffic barrier. This one holds a planter and is covered with faux rock that imitates a nearby basalt retaining wall. Hiday also covered the face of the pedestrian tunnel with faux basalt, poured stairs, and bases for new totem poles, and made other improvements. He’s so enthusiastic about verticals that he sometimes throws up a small wall to carve in his garage simply for his own amusement. “Vertical is so much fun I can’t believe I get paid to do it,” he says. “Carving concrete is almost therapeutic for me. I think it’s relaxing.” 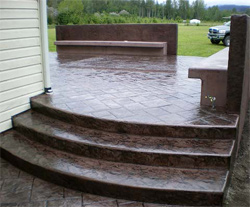 The company has a website, but its marketing is almost entirely done through word of mouth. Lately, Hiday Concrete has been taking Colin’s vertical mania to the bank, as more and more clients see what he can do and decide they want to get in on it. 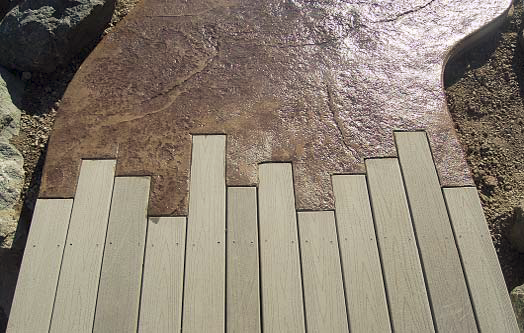 To create the faux basalt, Colin covered the traffic barrier and the face of the tunnel with diamond lath, which he hand-molded into rock shapes. Using a rubber mallet to pound the lath into shape, he employed a five-gallon bucket to mold the curves and a plastic tub for the angles. He then covered the lath with a homemade base mix, followed by a Flex-C-Ment texture coat tinted with Lamp Black integral color. He applied three dark shades of water-based stain using sprayers, sponges and brushes, then went over the whole thing with a scuff pad to bring out layers of color in spots.

“I had a blast doing that job,” Colin says. 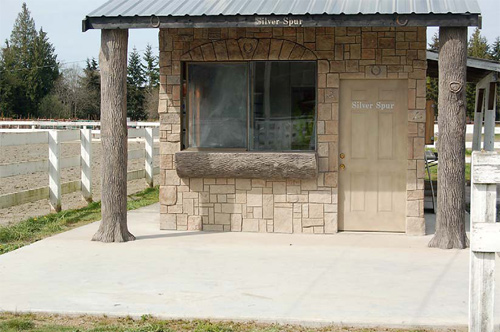 Hiday Concrete also won kudos at Hardware Wholesale’s most recent Decorative Concrete Event and Contest, held in April at the Silver Spur Riding Club in Bremerton, Wash. Competing against 13 other artisans, Hiday Concrete came away with the Most Artistic and Best Vertical awards. For that project, Hiday Concrete transformed a humdrum old ugly concrete announcer’s booth beside a horse ring into what Hardware Wholesale described in its newsletter as “an art piece straight out of the Old West.” 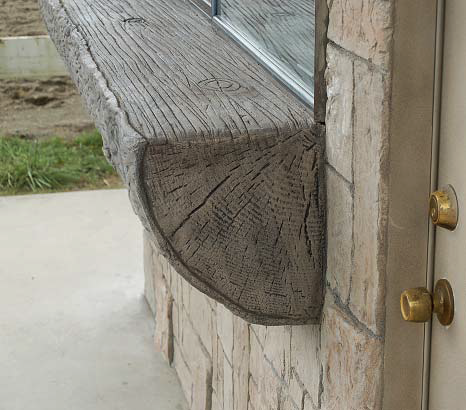 Hiday tore the cedar shingles off the front of the booth and replaced them with faux dry-stacked ashlar slate. Faux log columns appear to hold up the overhanging roof, and a faux quarter log set outside the booth’s window provides a surface for people interacting with the occupants inside. Colin built frames for the logs using plywood, 2-by-4s and diamond lath, which he covered in Flex-C-Ment. He used stamps for the bark texture, knots and bare spots on the logs, carving some details by hand to put some pop into it. He used pancake stamps to give texture to the faux slate and carved out all the joints by hand. While the mud on the wall was still wet, he sunk a horseshoe above the window and an actual silver spur alongside the door. He used several layers of water-based stain for coloring.

That job was a blast too, Colin says. “It was both challenging and fun.”

Hiday Concrete’s future plans involve moving its base of operations from the family home to a larger location visible from Sequim’s main highway. It will also expand its small concrete statuary business. The company currently has about 40 molds for gargoyles, Virgin Mary’s and whatnot, and is working on buying several hundred more. 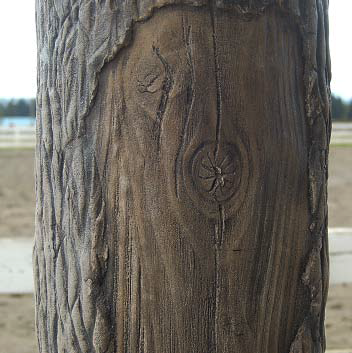 Demand for decorative concrete is growing on the Olympic Peninsula, which has expanded the field of competition. Hiday Concrete’s combination of both creativity and pride in craftsmanship. Ensuring that it will always be at the top of the heap. 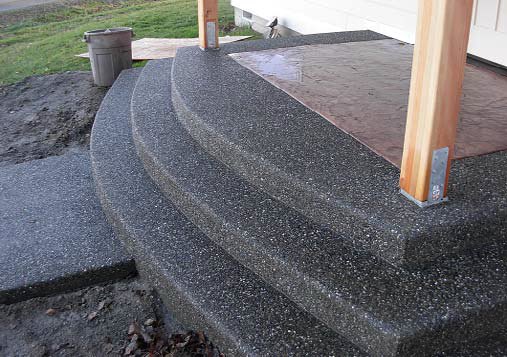 “I get calls to fix other people’s concrete all the time,” Colin says with a perfectionist’s note of disgust in his voice. “It doesn’t take that much more time to do a good job. You just have to care about what you’re doing and not leave ugly concrete.” 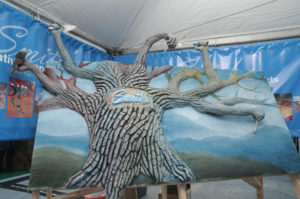 A Concrete Tree Celebrates the Branches of a Family-Owned Business 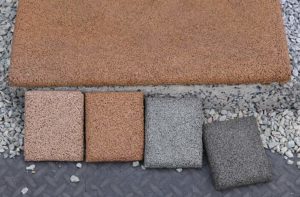