Rick Fischer’s technical knowledge and artistic abilities make him a double threat in the decorative concrete world. He began his career in custom automobile painting and restoration, then moved into decorative paint finishes in commercial and residential spaces. More than a decade ago, he expanded into the decorative concrete realm as a contractor and a trainer for manufacturers, the most recent being Ohio-based Ecrete Ltd. Fischer’s company, Deco Illusions LLC, focuses on historical, European-style surface finishes and contemporary artistic designs. 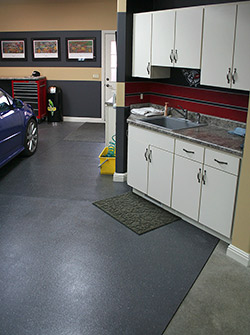 In 2011, he showcased his multiple talents in an award-winning residential project — the five-car garage at the home of Fort Wayne, Ind., resident Mike Eikenberry and his wife. At the garage, Fischer conceptualized interior design, painted on wall finishes and installed quartz granule and metallic flake-embedded polyaspartic floor coatings. His work resulted in a personalized “man cave” for Eikenberry as well as an eye-catching party-hosting space for the couple.

Designing a garage
Fischer’s relationship with the Eikenberrys began in 2004 when they built their French country chateau-style dream home and hired him to complete several wall finishes using paints, glazes and plasters. “Most of the house was already in character, so I created some key focal points,” Fischer says. “I did a large amount of decorative painting and continued to add finishes throughout their home for years.”

Knowing Fischer would be the best man to tackle their garage, which houses Eikenberry’s black 2010 Corvette, the couple sat down with him for consultation sessions in 2010. Fischer helped them design a new layout for the large, horseshoe-shaped garage, designating spots for an office, bar, lounge area, car detailing area and car wash area. Given that Eikenberry is chairman for the Auburn Cord Duesenberg Museum in Auburn, Ind., and an IndyCar racing enthusiast, two themes were chosen for the garage’s décor: art deco and automotive racing. 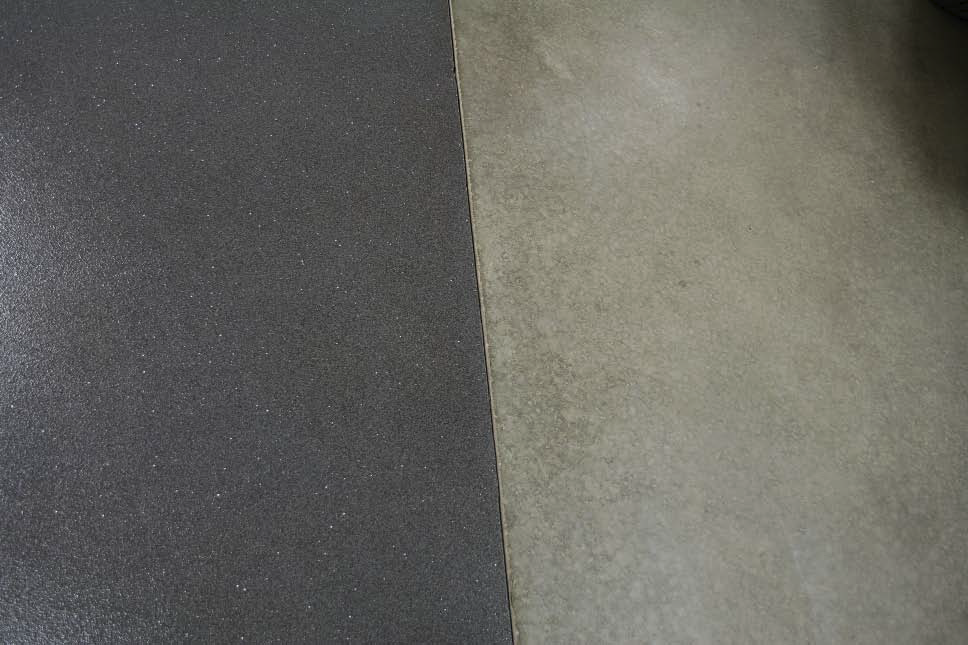 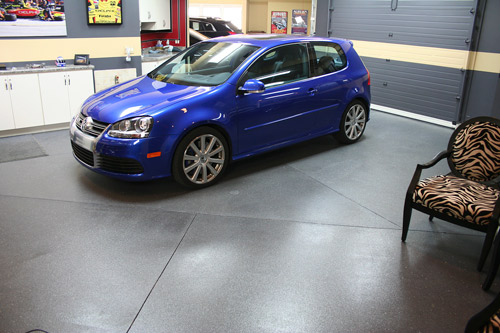 Looks aside, Eikenberry had two requirements for his garage floor: skid resistance and simple, snag-free cleanup with a microfiber dust mop. To meet both requests with his colored coating, Fischer added light texture by applying coats of PolyKoat GL, a polyaspartic material from Surface Koatings Inc., mixed with metallic flakes and Estes’ PermaColor Quartz granules.

“Our garage is finished like our house with a furnace and air conditioner, and it’s where we have most of our parties,” Eikenberry says. “We hadn’t done the floor yet, and we wanted to do something different. I knew a painted floor would peel, so I didn’t want that, and I didn’t want a plastic coating either. Then Rick suggested these products. There’s a fine line there with texture, and we hit it. I wanted some texture so it wouldn’t be slippery, but I also wanted it to be easy to clean.” 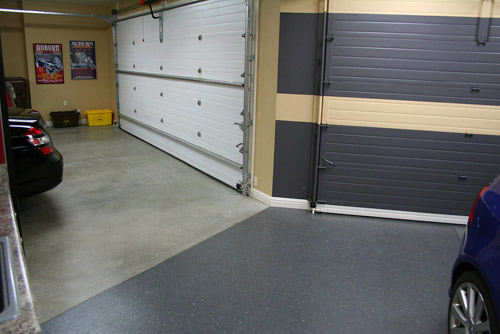 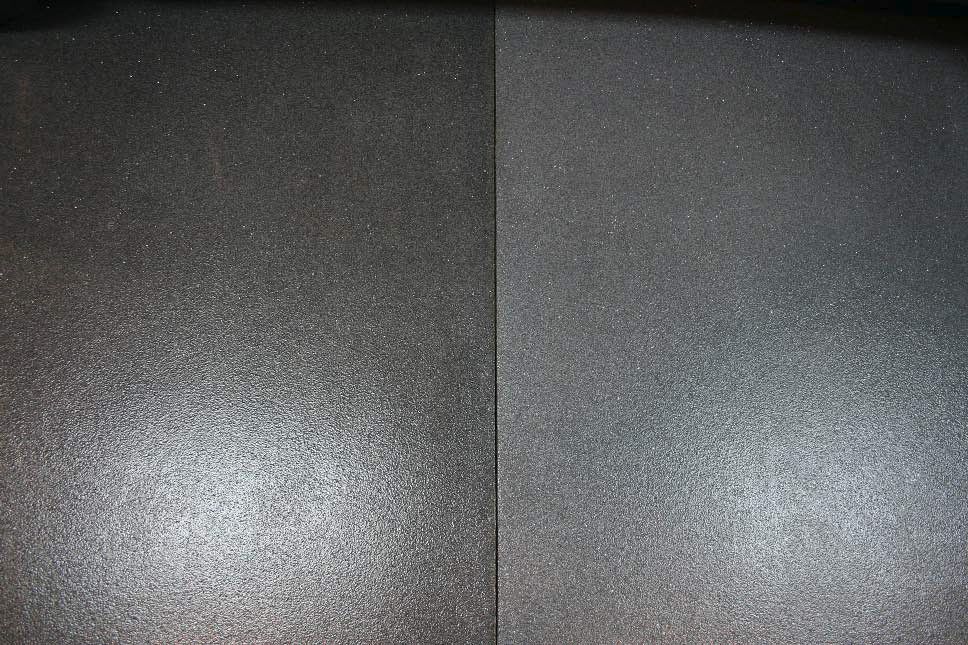 He says working on a large surface by himself posed a challenge — despite the slow set times of the polyaspartics, he had to move from square to square quickly while maintaining care and accuracy. 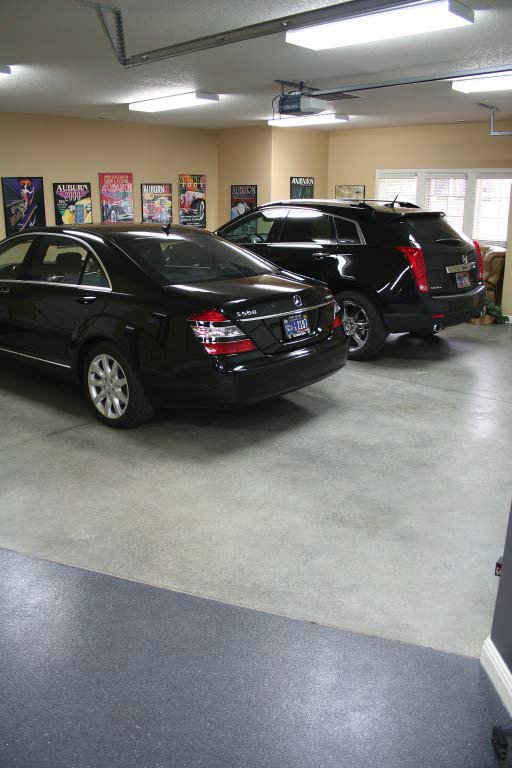 Fischer installed the first half of the garage’s floor coatings in the fall of 2010, but due to increasingly cold weather, he completed the job in the spring of 2011. The American Society of Concrete Contractors’ Decorative Concrete Council recognized Fischer’s garage project with a first-place finish in its 2012 decorative concrete awards in the category of Epoxy, Under 5,000 Square Feet.

“What stood out for me was how it all tied together,” Fischer says of the finished garage project. “Once the furniture and artwork was in there, I thought, ‘This is how I envisioned it.’ It was very rewarding for both parties.”

Eikenberry says the floor coatings add just the right amount of character to the garage that has become a cozy hangout for him, his wife and their friends.

“I’ve seen some floors that look outlandish,” he says. “It’s not like those, but it’s not a dull gray and it compliments the wall trim. It doesn’t look like a garage — it looks like we parked our cars in our living room.”

Scope of project: One 1,488-square-foot garage floor with polyaspartic coatings and metallics at a home in Fort Wayne, Ind. 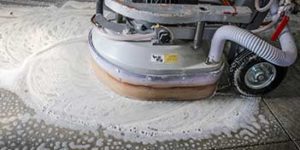 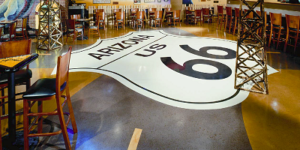 Polyaspartic Sealers: Something New on Top