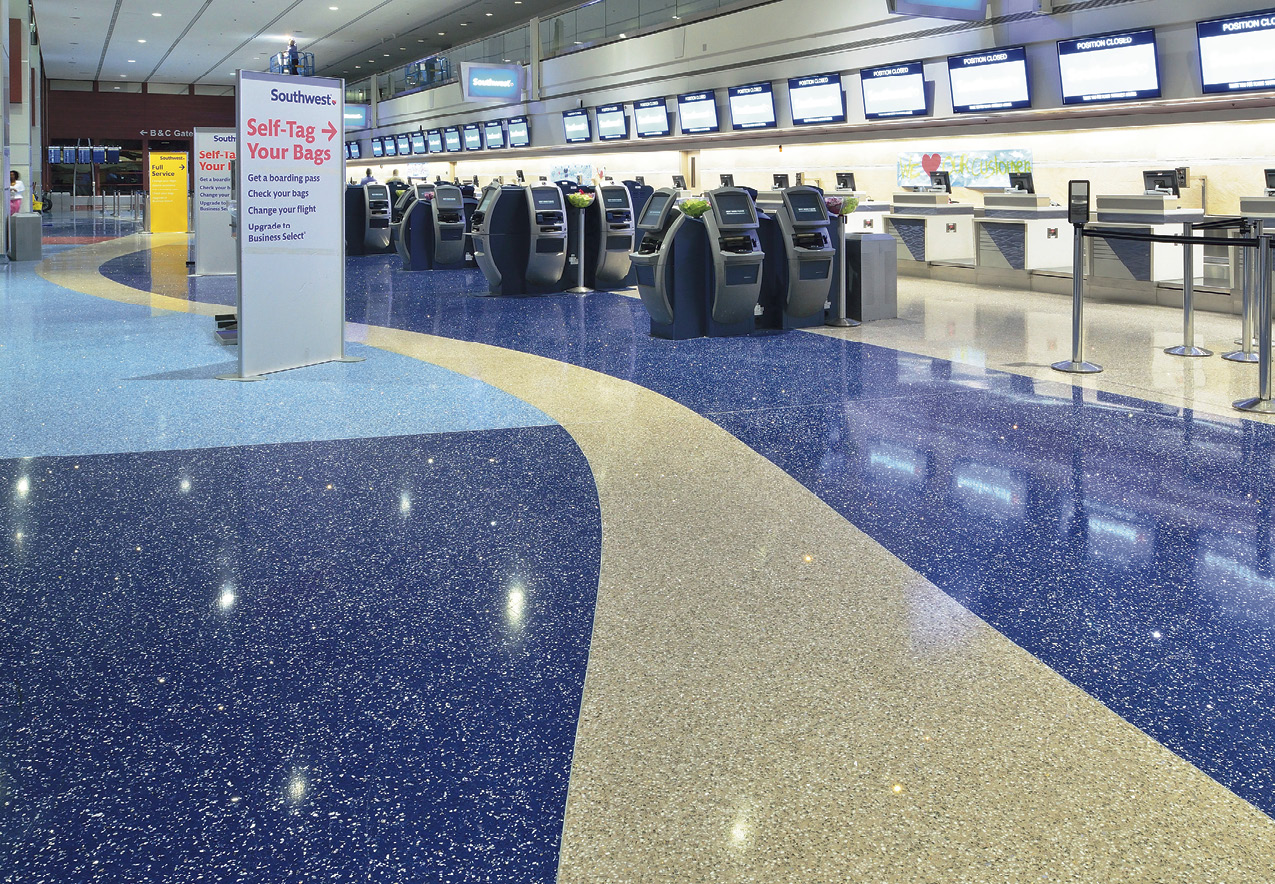 Visitors streaming through the area on their way to Sin City diversions and temptations might well agree this was a shrewd wager. For its money, the airport got visually appealing welcome-to-Vegas imagery built on the concrete floor with the super-durable, venerable phenomenon known as terrazzo — the poured-in-place or precast mix of cement or epoxy combined with chips of marble, quartz, granite, glass, or other durable and decorative materials. 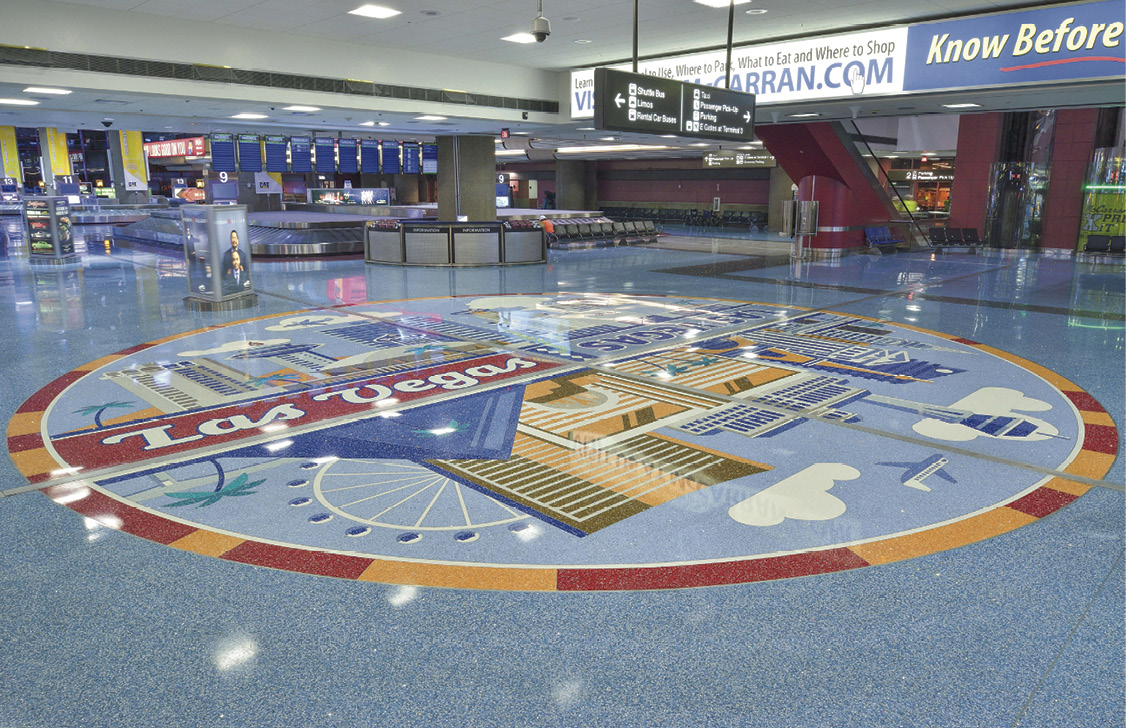 Working their terrazzo magic for this project was the terrazzo contractor Corradini Corp. of Fountain Valley, California, in collaboration with Doug Walton Architects PLLC of Las Vegas.

Corradini Corp.’s assignment: replace outdated carpet and tile in the high-traffic area with 240,000 square feet of epoxy terrazzo flooring in 27 different colors in a remodeling and modernization program in the baggage and ticketing areas of one of the nation’s busiest airports. Mirror, glass and mother-of-pearl aggregate was used in the wide range of epoxy colors to create “sparkle and pop” in the floor, says Chris Corradini, president of Corradini Corp. 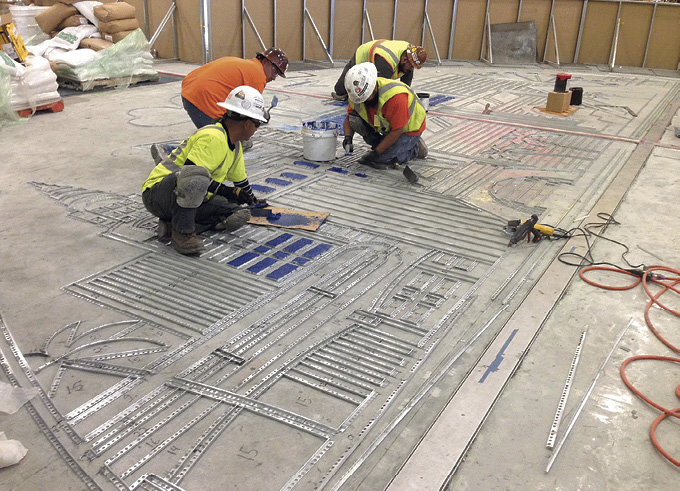 Vegas-themed artwork
The artist who fashioned this terrazzo masterpiece’s striking focal point — a medallion portraying the Las Vegas skyline, past and present — is almost as amazing as the installation’s visual homage to Vegas. Graphic designer Randy Heil, paralyzed below the shoulders by an auto accident, learned to use his mouth to paint and design.

The border of the 40-foot diameter medallion is evocative of a poker chip, while the images inside the border depict features of the renowned Vegas Strip — like iconic hotel/casinos new and old, and the Vegas Monorail. It also features other notable chapters from the city’s past, such as Heil’s boyhood hero Evel Knievel jumping Caesars Palace on his motorcycle, a mushroom cloud from an early atomic-bomb test in the Nevada desert and the silhouette of Howard Hughes in a window of the Desert Inn. 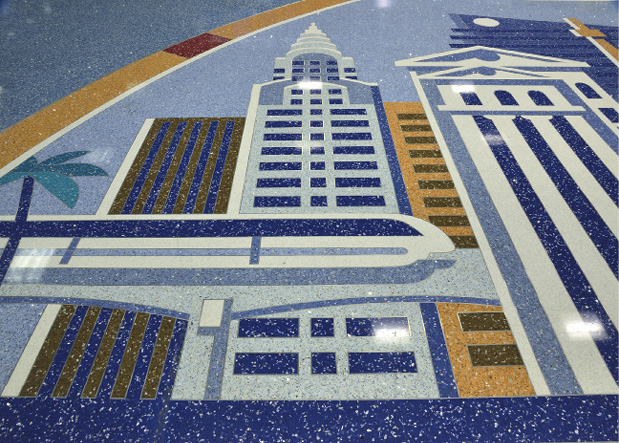 Newer Vegas Strip landmarks represented in the artwork include the Luxor pyramid, the Paris Eiffel Tower, the Wynn, the Stratosphere Tower and other houses of pleasure.

In a video about the medallion, Heil says he hopes the artwork serves as a condensed sort of history lesson for those not aware of an earlier edition of Vegas.

Fabulous welcome
Corradini Corp.’s task, then, was to turn Heil’s medallion artwork and other design features of the entire terrazzo installation into reality. 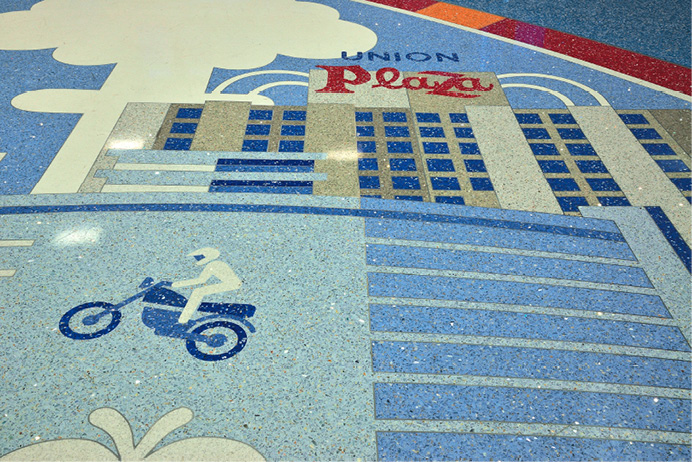 Using these water jet-cut terrazzo pieces allowed the artist to create an extremely detailed design, without using many divider strips, where small details were included, such as the airplane’s windows, hotel names or the welcome sign, Corradini says. For the depiction of the iconic “Welcome to Fabulous Las Vegas” sign, an exact match of the original color and design was re-created, he says. 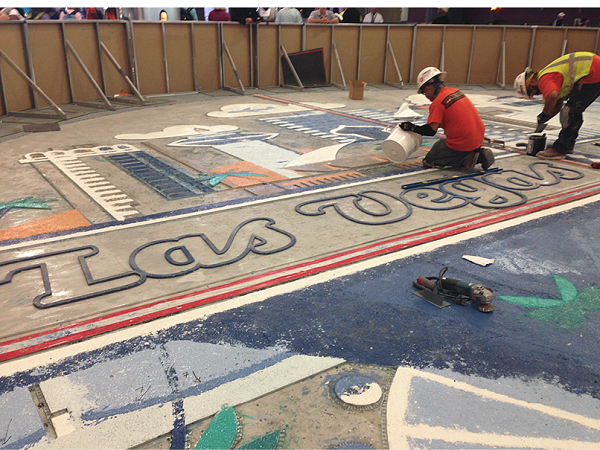 Making it happen
Since business as usual continued in the fast-paced hum of activity in the ticketing and baggage area, the project was executed on an accelerated schedule. Corradini Corp. ran two crews in 10- to 12-hour shifts, seven days a week — essentially around the clock — to complete the job ASAP. Temporary barriers separated the job site from passengers and airport personnel.

“This project was special for the amount of detail and hand craftsmanship that went into creating the terrazzo murals,” Corradini says. For the 40-foot-diameter medallion, more than 5,000 linear feet of 1/8-inch divider strip was hand-bent on-site by Corradini artisans.

Attention to detail, precision and meticulous installation was never compromised by the demanding schedule, he says. “The amount of intricacy in the artist’s design, creating the medallion artwork and other logos could not be accomplished by anyone other than a terrazzo artist.”

The kaleidoscope of epoxy resin colors and the glass, mirror and mother-of-pearl aggregate deliver the “Vegas feel, with all the glam and glitter,” says Christopher Popham, West Coast manager for Terrazzo and Marble Supplier, which supplied the terrazzo epoxy and aggregate.

In walking through the nuts and bolts of the job, Corradini says the existing flooring had been removed by the general contractor, with Corradini Corp.’s crews starting out by shot-blasting the concrete surface. This was followed by applications of a primer and an epoxy floor-fill to flatten uneven areas.

Then came a thick-film (40-mil) flexible epoxy crack membrane, trowel-applied on a fiberglass scrim, and another primer coat. When those were dry, divider strips were assembled, hand cut and hand bent, to delineate different images and colors to follow. Pouring and leveling the terrazzo — different colored epoxy with aggregate mixed in — then proceeded. 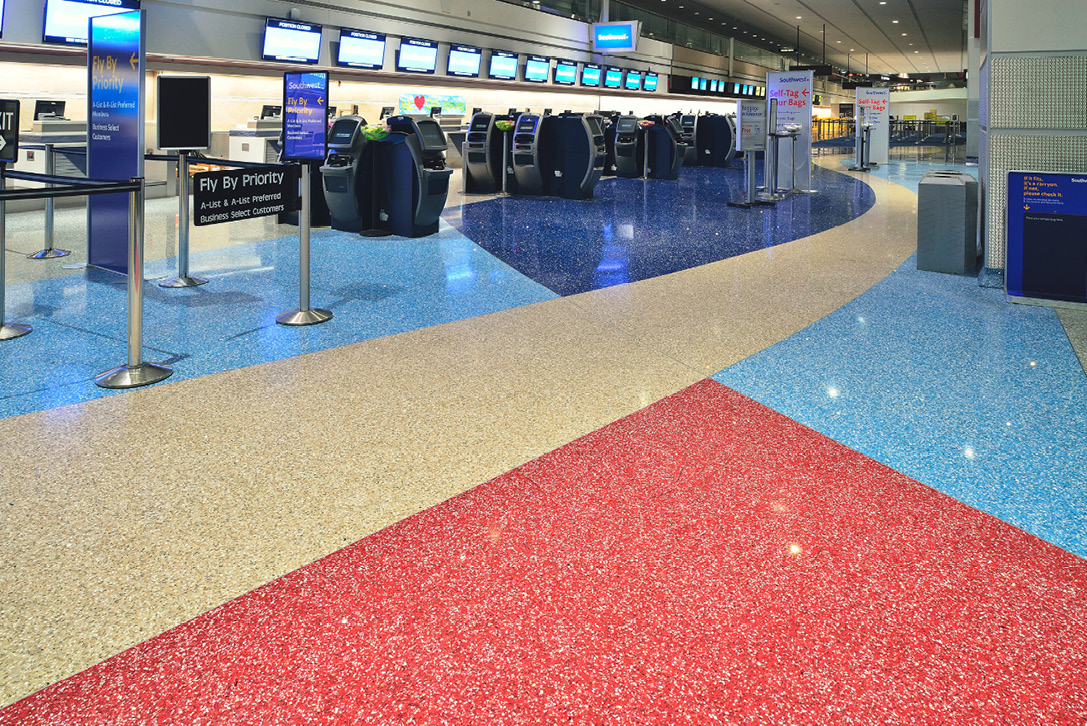 All these steps, including pouring the terrazzo, went forward in sections or phases — some 12 phases in all. Finishing methods included diamond grinding using several grit sizes, with a 200-grit polish completing this stage of the job. Two layers of grout coat were applied prior to the final polish, and four coats of a clear water-based sealer were added post-polish.

Installing a precast terrazzo base along walls, columns and other adjacent horizontal surfaces helped to give some measure of the sheer size of this project – about 5,000 linear feet of precast.

And, Corradini points out, there’s the matter of forging a meeting of the minds with the architect and McCarran design team about colors, images and effects — with the medallion being at the center of repeated “back and forth” issues between the contractor and owner/designer. 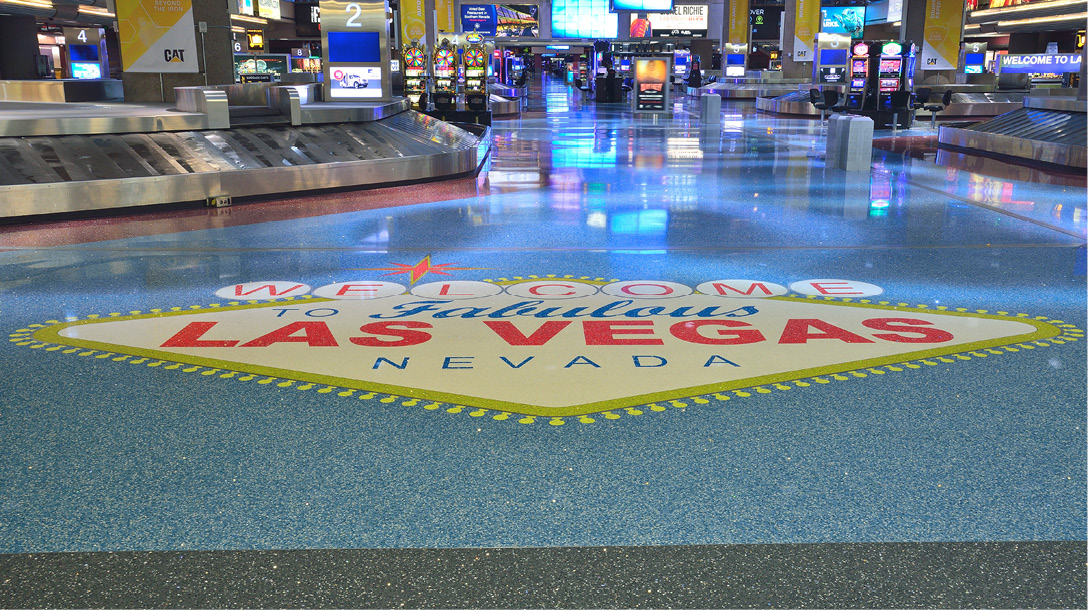 The medallion may win the “rave” tally, but for Corradini it’s the depiction of the Welcome to Fabulous Las Vegas sign that ranks as his favorite feature of the job, “because it’s so iconic.” As with other artwork for the medallion and logos, CAD drawings provided a detailed road map for the installations.

The job was done in small sections, right alongside the ongoing functions of the ticketing and baggage-claim areas, with four-foot-high barricades separating travelers from Corradini’s terrazzo crew.

“That made things a little difficult, but in a way it was good marketing,” says Corradini, “with people stopping to check it out.” They got to see firsthand that terrazzo is a series of demanding steps involving highly skilled tradesmen, and not just slabs of highly decorated flooring that look like marble or some other material.

The medallion in particular is “true artwork,” he says. “It’s a very intricate creation, and it’s what we’re most proud of with this job. It was a lot of work,” as 27 different colors are interspersed in a 40-foot-diameter circle. 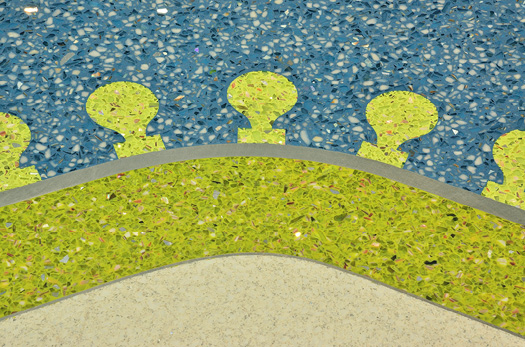 The ‘nearly unimaginable’ realized
In the view of architect Douglas Walton, the epoxy terrazzo installation gave the terminal a “completely updated and revived” look.

“Terrazzo, with its endless possibilities of colors and design, allows the nearly unimaginable to be created in the floors,” Walton says. In addition to the custom logos, the baggage claim terrazzo features a geometrical design, framing each of the 16 baggage carousels, he says. The ticketing area terrazzo “is more of a whimsical design, directing traffic flow to the security gates.”

The National Terrazzo and Mosaic Association (NTMA.com) was impressed with Corradini Corp.’s artistry, giving the installation its 2017 Project of the Year award. In a review of 2017 Honor Award projects, the NTMA described the project as “a showcase for design detail and meticulous hand craftmanship in terrazzo.”

“The assertive design of the new terrazzo floor perfectly captures the character of the city while providing logical functionality,” the description notes. “The 27 beautiful colors are consistently deep and rich, sparkling with mirror, glass and mother-of-pearl aggregate.”

Based on these kinds of glittering reviews, there’s little doubt that McCarran Airport got a solid payoff on its wager.

Scope of project: Replacing carpet and tile in a high-traffic area of the airport with 240,000 square feet of 3/8-inch epoxy terrazzo in 27 different colors, creating three logo designs, and integrating precast and cast-in-place elements.

Most challenging aspect: Execution of project on accelerated schedule; extensive detail and hand craftsmanship of terrazzo and precast elements; installation in multiple phases to allow continued functioning of airport baggage and ticketing areas; formulating color and design plans in discussions with owner design team and architect. 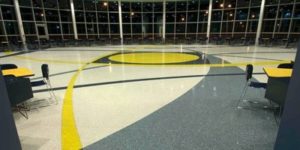 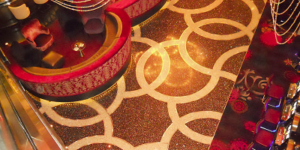