Black Bear Coatings & Concrete, the contractor that tackled this demanding decorative-concrete assignment, is also feeling a good vibe about the new Boston Harley-Davidson. After all, the company went into high gear to turn the designers’ creative inspiration into striking reality.

“The rewarding part of the job is to go there and see the complete project,” says John Scott, technical field adviser and partner with Justin Tousignant, president of Black Bear. Not to mention, he adds, the owner and architect thought the outcome was fantastic.

“Every few feet came out differently, which in this case is very appropriate,” says architect Robert Elfer, with studio Troika, of the 16,000-square-foot polished floor. Elfer, who served as the firm’s partner in charge of the project, says the transformation of the building’s battle-scarred, much-abused existing concrete floor delivered the “urban, authentic” impression sought by the designers and owner.

“We knew the floor was in rough shape, but the one thing we liked is that it illustrated the history of the building,” Elfer says. The polishing process preserved rather than obscured this legacy.

But it fell to Black Bear to make it work — to salvage this patchwork concrete canvas and turn it into a useful and usable floor in sync with the ultra-cool vibe exuded by this new motorcycle palace. To accomplish this feat, Black Bear steered a tortuous path through a ragged concrete terrain made up of a “smorgasbord” of issues including residue from various flooring types installed at one time or another in the 40-plus year-old building: trenches, residual mastic and gypcrete underlayments, and a patchwork of slabs. Black Bear’s crews plowed through this maze, constantly switching grinding grits, cutting away residues and removing unsalvageable concrete.

When Black Bear found a 3,000-square-foot area beyond hope of reuse, it turned to a cutting-edge alternative, a new polishable overlay designed to match traditional concrete’s gray color and aggregate composition — CTS Cement/Rapid Set’s TRU PC. This facet of the polishing job blended effectively with the other sections of the polished concrete floor, Elfer says.

The polished concrete floor in the dealership’s showroom and sales area might be considered the crown jewel of Black Bear’s scope of work at the site, but the company also demonstrated its versatility by casting concrete countertops and installing epoxy flooring and protective concrete coating systems.

‘It was a mess’
Tousignant says the existing floors in the building’s showroom and sales areas “were a mess,” and appeared to offer little potential for polishing. But the owner and architect were adamant about polished concrete and Black Bear found ways to deliver it.

The concrete surface extended across a boundary where a common wall had divided two different buildings occupied by separate businesses. Removing the wall and constructing a new steel structural framework was part of a massive rebuilding program, as the two buildings and floors were combined into one.

“It was like four timelines,” Elfer says of a procession of different businesses, including a grocery store, that had occupied parts of the spaces over the years. “We knew the floor was in rough shape, but the one thing we liked was the history of the building and how the floor showed this.”

“Choosing the right diamond for the psi was a challenge,” says Scott, referring to the existing concrete’s varied compressive strength and condition. “We went through different grits, switching diamonds out. We’d start grinding, then run into a Cracker Jacks box, not sure what kind of surprise would be there.”

The trial-and-error grinding eventually succeeded on most of the surface, except for that sizeable area where the new TRU PC overlay was used. Solution samples were prepared and the polishable cementitious overlay, formulated to produce an authentic concrete look with gray colorant and aggregate, won out over an epoxy metallic.

The look and color of the real deal
Using a scarifier, Black Bear demolished about 1/4 inch of the concrete slated for overlay installation. A crew used a diamond blade to cut joints at the section’s edges where the overlay would meet the existing concrete substrate.

Polishing the overlay began the next day, as the material typically achieves a strength of 5,000 psi within 24 hours, says Joe Zingale, CTS/Rapid Set flooring group specialist.

The Boston Harley site is one of the first places where the new overlay product was used, Zingale says. He anticipates it will be on the market soon. “We’re still tweaking it,” he says.

It will be marketed specifically for use with Husqvarna grinders to ensure predictability in performance and appearance, Zingale says. “It’s more spec driven, so to speak,” he says. “It makes specification simple . . . here’s the machine, the material, the process and the results.”

Tousignant says from a contractor’s perspective, the overlay material can provide an “exposed aggregate aesthetic.” In practice, the overlay is comparable to Rapid Set’s conventional TRU self-leveling overlay, with its ease of handling, leveling and fast set. It’s ready for polishing in 12 to 16 hours.

“The main difference with the PC is the larger aggregate profile,” Tousignant says. “It resembles typical concrete,” producing a new-pour appearance at 1/4-inch depth.

Polishing the existing concrete and the new overlay proceeded in stages over a number of days, with more than 10 days spent just on grinding and prepping different portions of the existing slab, says Scott. Black Bear used the Vexcon Certi-Shine system, consisting of the Certi-Shine Clear potassium silicate densifier, Fusion floor-repair technology and Finish Coat Ultra guard-sealer. Also used was Certi-Shine Fixative Wash, which scavenges and removes excess or unreacted silicates from the concrete.

The Fusion product is a modified silicate formula applied during the grinding/polish process, using a specially designed diamond puck. When applied, the grinding process creates a wet slurry on the concrete surface. After it’s dry, the slurry is ground off to remove residues. The slurry created by the grinding fills voids and holes. 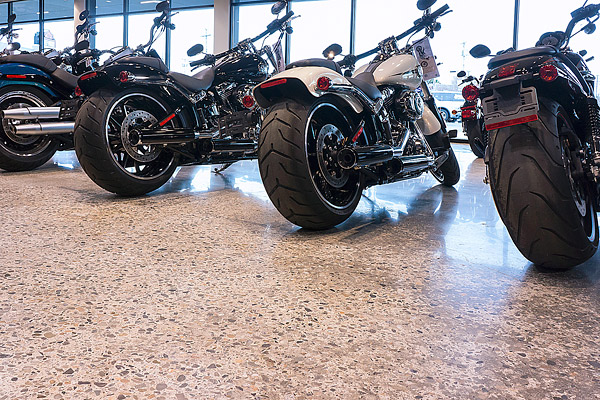 A story in the floor
The existing concrete’s varied patterns and hues “weren’t perfect, but that’s what they were looking for,” Scott says of the client. “They didn’t want a Macy’s floor or a Filene’s floor,” he says, referring to a uniform department-store look. “They wanted a clean but industrial look,” polished to a 400-grit level.

Andrew Janiak, facilities director for Boston Harley-Davidson, says he was influenced by a visit he made about a year ago to a Recreational Equipment Inc. store in the SoHo district of New York.

“It’s in a renovated building with a beautiful floor, and also great walls and exposed structure, that all showed the history of the building,” Janiak says. “In the floor I could see shapes from previous structural elements, patterns from floor repairs and pieces of steel half-ground. I could see pipes and beams, and other miscellaneous steel in the concrete, cut flush with the surface.

For the countertops, Black Bear used the Buddy Rhodes FGR Countertop Mix. A centerpiece is the main reception desk, where the mix was poured and pressed over a Harley-Davidson nameplate to embed the image on the countertop surface.

Here, the piece was last off-site upside down, with the concrete mix pressed over the brass nameplate. Melamine plywood was used to produce the smooth countertop surface and facilitate release, Scott says. The 8-by-3 1/2-foot piece, estimated at 420 pounds, was then flipped over and put in place.

All the countertops were diamond ground and polished with 50-grit metal-bond diamonds followed by resin-bond diamonds at 100, 200 and 400 grit.

In the service and storage areas of the building, an investigation of the existing concrete substrate revealed the presence of high moisture content (relative humidity). Black Bear installed a multicomponent epoxy flooring system and a vapor-reduction sealer in these areas, where performance and function took precedence. Both floor areas had already been shot blasted for asbestos abatement and the final prep was done by diamond grinding.

In the storage areas, Black Bear applied a vapor-reduction primer that doubles as a sealer — Synthetics International’s Synthetic30 vapor-control system.

Most challenging aspects: Evaluation and preparation of existing concrete surface of varied ages and condition, including grinding and polishing with different diamond grits appropriate for range of concrete characteristics; installation of cementitious polishable overlay; evaluation of moisture issues in existing concrete in shop/service and storage areas, with application of moisture-mitigation technologies.