It’s going to take the industry by storm. It’s a game changer. Revolutionary. In the case of polishing concrete with power trowel machinery, all those phrases might well prove true. Or, maybe not.

Revolutionary? You could make that claim. Game changer? Yes, but…

Perhaps it’s best to conclude the jury’s still out. But no question about it — the power trowel machine is on course to churn up things in the polished concrete trade.

“It’s not a replacement for all the other equipment used in polished concrete,” says Jeff Snyder of Wagman Metal Products, one of the companies that pioneered the development of adapting power trowel machines for grinding and polishing concrete. “It brings more opportunity and expands the use of polished concrete, and opens doors to larger projects” — big projects where the per-square-foot cost of polished concrete was a barrier.

This use of power trowels for grinding and polishing is gaining more traction, so to speak, due partly to the challenge of a tight labor market. But quicker turnaround and the resulting cost savings are the major drivers, say representatives of companies involved in the business.

“It opens doors to processing faster. A job that may have taken 10 days now takes three days,” Snyder says. “The owner’s happy. He’s getting his building faster and you need less scarce labor. It’s a win-win.”

Also adding octane to this growing facet of the trade is the idea that power trowel grinding is another part of the toolbox, not a total replacement of the arsenal that threatens the economic doom of a trade that established itself as a major player in high-quality flooring.

“Once polishers get past the idea that it’s competition, they see it as another piece of equipment for polishing concrete,” Snyder says. It offers the potential to make polished concrete cost-competitive for large facilities — warehouses, sprawling commercial space such as big-box stores, airplane hangars — “anything 5,000 square feet and up.”

Snyder says the precursor of power trowel outfitting for grinding/polishing dates back to the early 1990s, when George Wagman responded to requests from contractors to attach brushes to power trowels as a means to remove dissipating resin-curing compound from concrete. Early in the new millennium, this was followed with systems for brushes for scrubbing and stripping and, eventually, rotary devices for pads, bristles, polishing, stripping and scrubbing.

These power trowel systems for grinding and polishing aren’t capable of duplicating everything conventional diamond grinders can do, such as leveling the floor. “If you want to grind the floor level, there are other ways to do that,” Snyder says, such as using a heavy-duty diamond grinding machine.

Also, these systems are designed to process wet, as they’re not equipped to collect airborne dust.

Conventional diamond grinding and polishing also is designed to produce “museum-quality” polished concrete, and for specifications that call for exposed aggregate, Snyder adds.

Adding power trowel concrete grinding to a contractor’s portfolio is not capital intensive, Synder says. As he puts it, it’s a “low barrier to entry.” Still, attention to good polishing practices remains crucial to success.

“The idea that you can go faster doesn’t mean you can be sloppy. You have to clean up the slurry after every grit level,” being sure to remove diamond fragments that could compromise processing at the next finer diamond grit. Low-emitting propane machinery is a must for power trowels used for interior jobs.

The fast track
Ryan Lakebrink, co-owner of The Art of Concrete in Denver, is all in with the power trowel polishing phenomenon, already using the process for most of his polishing work.

“It doesn’t fit every job in every place, but when it works it’s way more efficient than walk-behind grinders,” Lakebrink says. His company uses Wagman Metal Products’ grinding equipment with his power trowels, a Multiquip Whiteman and a Wagman LP230. Most of his projects have been of the 20,000-square-foot and up variety, mainly big-box retail, with some smaller convenience store jobs in the mix.

Lakebrink says grinding with power trowel systems produces heavy amounts of slurry, due to the volume of square footage processed so rapidly, so disposal needs must be taken into account. The process also tends to “splash” more than conventional grinding, meaning protection of adjacent surfaces is high priority.

Access to spaces to be processed such as doorways or other openings can present a challenge with power trowels, particularly the larger-sized machines, he says.

Efficiency and the potential for fatter profit margins are benefits for the general contractor and owner because of the brisk turnaround made possible with power trowel grinding systems. “It’s great for the bottom line but more important is that it gains time for the GC,” Lakebrink says. “It can cut the time in half.”

Picking up speed
Erich Wichter of GranQuartz, a supplier of power trowel machine accessories, says the use of power trowels for grinding/polishing currently remains a specialty used by a small portion of the polished concrete trade, but the numbers are climbing.

“It’s a small percentage now, but as the larger companies start to add it, the smaller companies will follow suit,” says Wichter, Southeast regional sales representative for GranQuartz’s concrete division. The company is a distributor of grinding equipment offered by Superabrasive, the developer of the Trowel Shine system for power trowel concrete grinding/polishing.

“I think it’s really going to change the industry,” he says. “It will allow people to produce more work, and it’s less labor intensive. You won’t need 25 men to do 65,000 square feet, and it will open up doors for customers who won’t pay $5 a foot but might go for $2.”

This positions polished concrete to challenge VCT (vinyl composition tile) on big projects, particularly when polished concrete’s sustainability assets such as durability/service life and ease of maintenance are figured into the equation.

The key word here is “active”, says Stephen Klugherz, president of Diamatic. Silex was recently acquired by Diamatic, a deal that includes the new polishing system.

Without going into an engineering dissertation, Klugherz says the active planetary mechanism results in a more aggressive grinding process, providing a more evenly refined, consistent scratch pattern and boosting productivity while still providing the capability to polish to the highest levels. When an alternative “passive” polishing mechanism is used, he says, it is “dragged along” and hampered by barriers in high spots.

The Silex Power Trowel Polishing System represents a major adaptation of the power trowel machine that includes a specially designed gearbox mounted to the undercarriage, a water-distribution apparatus and cruise control. Klugherz says this adaptation, both engineered and manufactured by Diamatic, essentially transforms the power trowel into a grinding machine.

Michael Littlefield, president of the company, developed the system “when faced with a 350,000-square-foot job and no feasible way to get it done efficiently at a reasonable price point,” Meghan says. “The R&D for the system was tested and perfected on this project. We’ve used the system on over 1 million square feet.

“It’s a super-efficient, cost-effective way to get high-volume projects done,” she says, summarizing the essence of the case made for grinding and polishing with a power trowel. She and Michael assert that their system is “rugged and reliable,” and boasts solutions to “some major issues contractors face when trying to polish with a trowel. We’ve made it a straightforward, easy-to-follow process with proven results.” 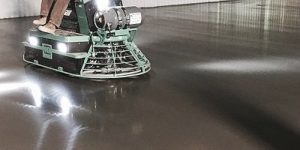 New Technology Delivers the Shine to Concrete Without the Grind 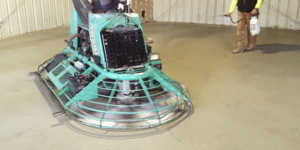 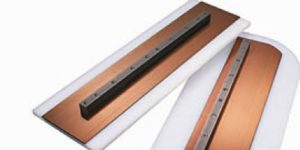