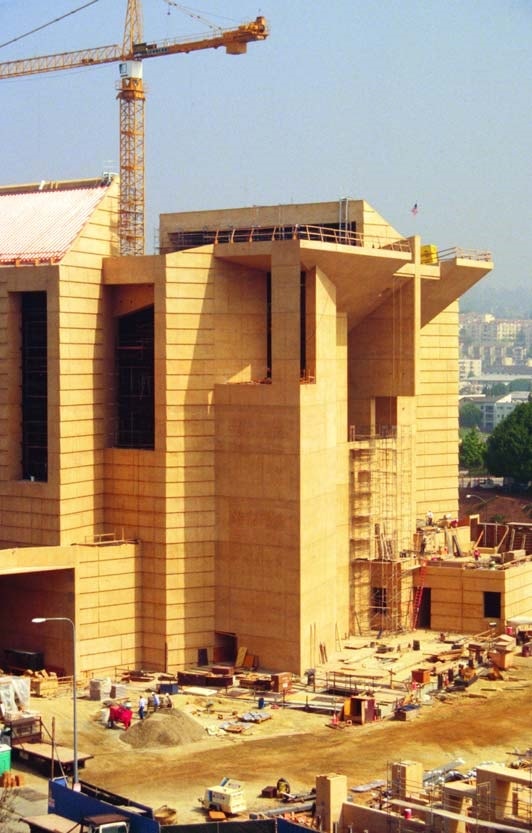 In the recently completed Our Lady of the Angels Cathedral, common concrete has been uplifted into a structure that expresses the spiritual passions of its community. One of the most striking ingredients in this transformation has been the use of integral color in the concrete. Colored concrete was used to construct the cathedral and the adjacent bell tower and plaza, and is exposed as the finish for interior and exterior walls. Unlike the gray of typical concrete structures, the cathedral has an earthy golden cast that complements the Southern California sky and recalls the hue of the adobe used to build the first mission churches in the region.

While the “mission adobe” palette harkens back to the past, the cathedral was also built with an eye towards the future. Dubbed the “Half-Millennium Cathedral,” the structure was designed to provide five hundred years of service to the Archdiocese of Los Angeles. This ambitious performance criterion figured in the decision to use integral colors since the iron oxide pigments that tint the concrete are permanent and fade-proof.

The colorants for the cathedral were supplied by Davis Colors, a brand of Rockwood Pigments and a world-wide leader in concrete color additives. According to Nick Paris, vice president of Davis Colors, “Iron oxides are the same pigments that give real adobe its buff tone and provide the color in such natural wonders as the Grand Canyon. The earth tones of the cathedral will last as long as the concrete itself.” The use of integrally colored concrete assures that the cathedral will be able to avoid the ongoing maintenance associated with paints and surface-applied coatings, he adds.

Design approach
This is not to say that painted or prefinished surfaces were seriously considered on the project. The cathedral’s designer, Spanish architect Jose Rafael Moneo, envisioned the use of cast-in-place concrete from early in the project. His choice reflects his experience with architectural concrete in Europe and his concern for using materials honestly to express the character of the material from which a building is made. When another design option was proposed — to clad a steel frame with prefabricated panels — Moneo rejected the approach, stating that he wanted to “see the hand of the craftsman” in the construction materials. In keeping with the architect’s vision, the concrete shows subtle nuances in appearance due to the complex behavior of cementitious materials. “Concrete, whether colored or not, is a natural material prone to variation in appearance,” Paris says. Instead of being seen as defects, these variations are part of the aesthetic appeal of concrete, expressing its character and vitality.” Indeed, many visitors to the cathedral assume that it is made of quarried stone because the colored concrete has such a natural look. 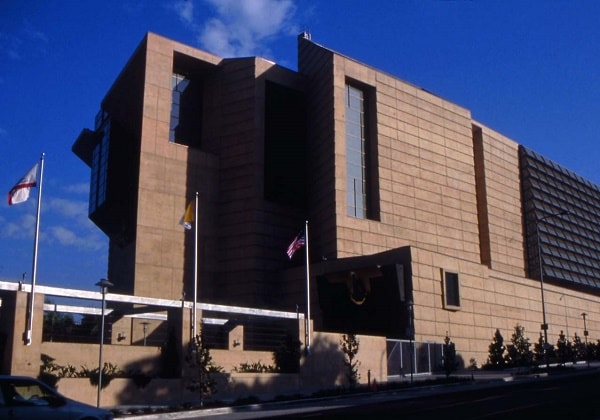 The project team was faced with the challenges of designing a concrete mixture and establishing construction procedures to meet both the technical and aesthetic requirements of the building. The first large scale mock-ups built to investigate proposed concrete mixtures cracked due to heat produced by curing cement. The thick walls of the building, up to 60 inches in some locations, had created a heat sink that made it difficult for the cement’s heat of hydration to dissipate. Thermal cracking is not a problem in typical buildings. But in a monument designed to last five centuries, thermal cracks could allow corrosive chemicals to penetrate into the structure and lead to premature deterioration.

The conventional approach to this type of problem is to use cement and admixtures that release less heat. Such materials, however, were either not available from local suppliers or were too dark in color to produce the desired concrete shade. Another approach is to cool a structure by spraying it with water as it cures. However, this was unacceptable on the cathedral since concrete can pale if it is exposed to water before it has set sufficiently. To resolve these contradictory demands, a large number of additional mock-ups were constructed to test various concrete mixtures and techniques. 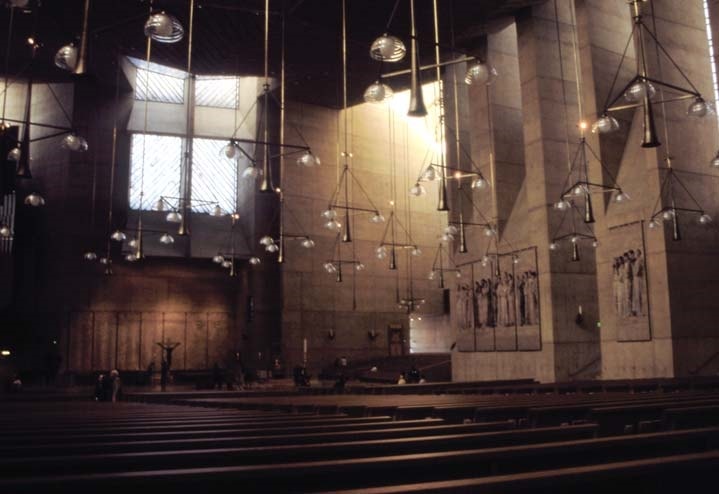 Concrete materials
Eventually, the project team developed an approach that satisfied all their requirements, and did so beautifully. A white portland cement with low heat of hydration was imported from Denmark. Fly ash, used to increase the concrete’s strength and corrosion resistance, was specially processed to assure a consistent, light color pozzolanic material.

Similarly, fine and coarse aggregates were selected for compatibility with the desired shade.

Color additives were custom blended by Davis Colors to meet design requirements. Davis packaged the pigments in premeasured sacks to simplify batching at the ready-mix plant. A dosage rate of eight pounds of pigment per cubic yard of concrete was used throughout the project. In total, the cathedral required more than one hundred tons of Davis Colors.

Pouring the cathedral walls took over a year. A key to maintaining color consistency throughout the pour schedule was to procure all concrete mix materials at the same time. This avoided inconsistencies that could have resulted if material sources changed during the course of the project. Catalina Pacific, the concrete supplier, ordered most materials in bulk quantities and stored them in silos dedicated to the project. Because a Davis Colors factory was located just a few miles from the ready-mix plant, color additives were warehoused at the Davis facility for just-in-time delivery. 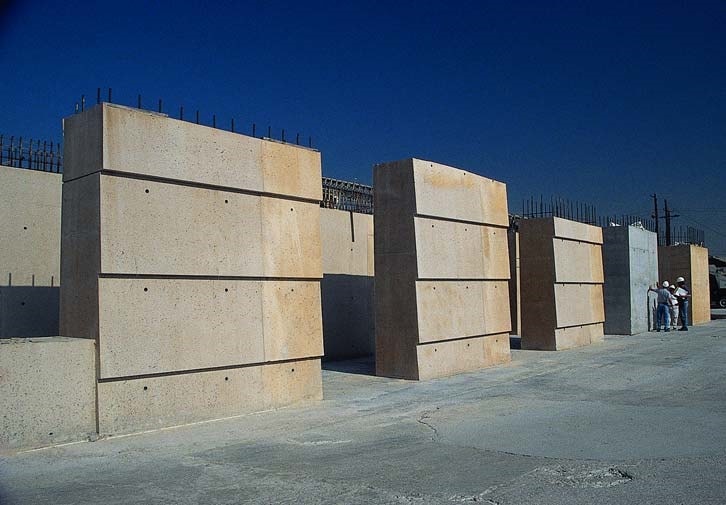 Construction techniques
Color consistency also depended upon a high level of workmanship by the contractor, Morley Construction Company. There are almost no right angles in the multi-faceted project. This meant that formwork had to be constructed with a level of care more typical of furniture making. A double layer of overlaid plywood form panels was used to keep walls flat and resist the pressure of twelve-foot-high concrete lifts. The double layer also allowed the face panel to be screw-mounted from the back; this kept the face of the forms smooth and free from fasteners that would have left impressions in the concrete. Joints between form panels were sealed to assure that cement paste would not leak out and leave blemishes in exposed surfaces. 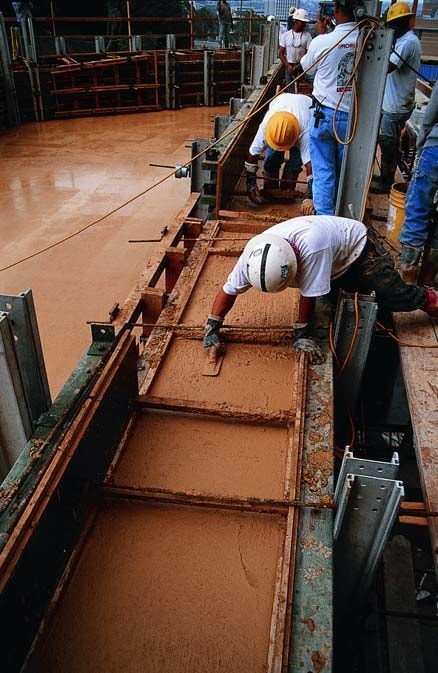 Just before concrete was placed, forms were carefully cleaned and treated with a thin, uniform application of form release. Then, forms were left in place several days after concrete placement until thermocouples, installed inside critical pours, indicated that the walls had cooled enough to avoid thermal shock.

Special attention was given during concrete placement to guard against conditions that could have produced surface defects. For example, congested seismic reinforcing steel could have blocked the passage of coarse aggregates and created a condition known as segregation. At sloped areas, such as the giant colored concrete cross above the altar, another concern was to place the concrete as close to its final position as possible to avoid the formation of flow lines in the concrete. 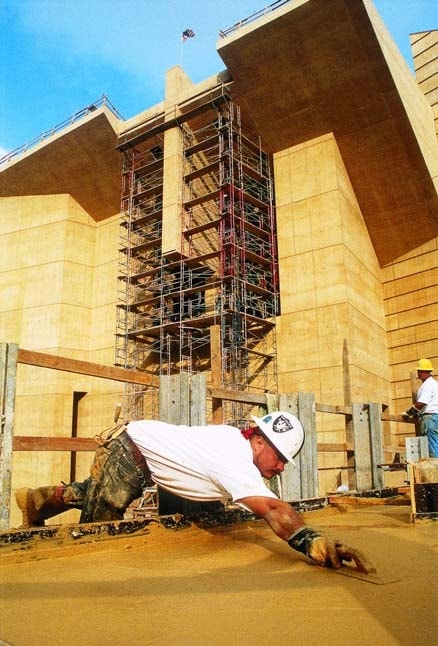 Morley organized its crew into several teams that competed on the basis of quality control as well as productivity. Working on a significant building like the cathedral can be the crowning project of a career in the building trades, and everybody involved in the work gave their highest level of craftsmanship to the project. The proof is evident; almost no construction defects mar the exposed concrete.

Finally, the concrete was treated with siloxane water repellent, a clear, penetrating chemical that does not alter the visual character of concrete. Siloxane will be reapplied at intervals over the life of the building to help keep the structure clean and assure continued protection against water intrusion.

Despite the attention given to quality assurance on the project, colored concrete proved an economical solution since it provided both the structure and the finish for the building. Once past an initial learning curve, construction moved swiftly and allowed the church to meet its move-in schedule and consecrate the cathedral in September 2002.

For the worshippers who attend mass in the cathedral and for the commuters who see the structure as they drive past its sentinel position alongside downtown L.A.’s 101 Freeway, it may not matter that a new standard has been set for colored concrete. What does matter, however, is that the “Concrete Cathedral,” imbued with color, will help raise the spirits of Los Angelinos for centuries to come. 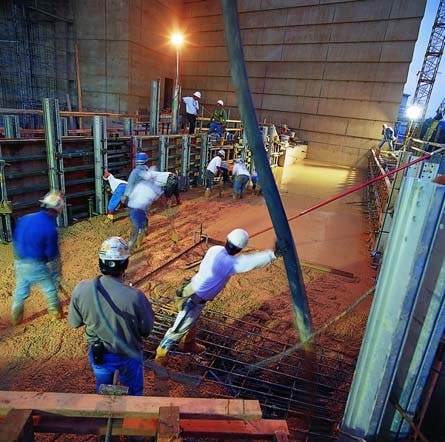 Our Lady of the Angels Catheral Architectural Team 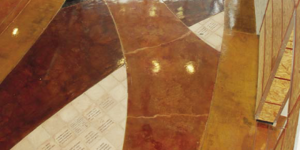 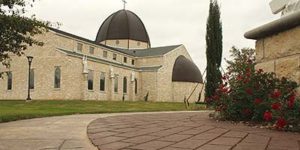 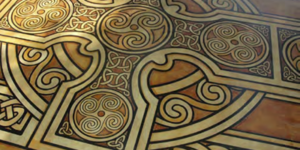