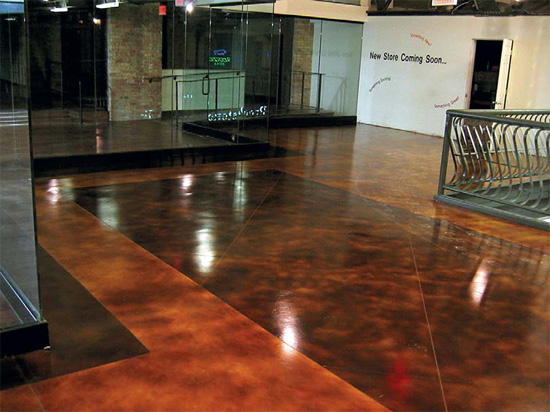 In an October 2006 announcement, The Deseret Morning News envisioned a rosier future for one downtown Salt Lake City historical landmark-cum-bedraggled shopping mall. “Imagine Trolley Square, only brighter, with a broader mix of tenants and without the empty dead-end corridors,” it said.

Trolley Square is a 239,000-square-foot former trolley car barn built in 1908. It suffered a prolonged near-death experience after World War II before being repurposed in the 1970s as a shopping venue and local tourist attraction. That staved off irrelevancy for a while, but by the turn of another century Trolley Square was once again marking its glory days in calendars past. 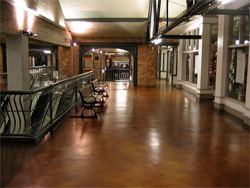 Even dark and dreary, however, the structure caught the eye of developers. Mark Blancarte, an executive with Blake Hunt Ventures, was quoted in the same 2006 Deseret Morning News article as calling Trolley Square “one of the most unique pieces of property anywhere in the country.”

All it needed, apparently, was a facelift involving fountains, skylights, a glass elevator, a central courtyard, parking garages, outdoor landscaping, lighting and design, and new retail and residential space.

As part of the first phase of the ambitious multimillion-dollar renovation, E.B. Berger, a residential, commercial and industrial building contractor based in greater Salt Lake City, spent the last quarter of 2007 answering the challenge of breathing new life into some 39,000 square feet of dull flooring in the public areas: century-old (and looking it) brick pavers on the ground floor and tired tile upstairs. But all of their work, as with renovations throughout the structure, had to take place off-hour so that shoppers and employees could traipse freely during mall hours.

No easy task, especially on the top floor, where decorative concrete work was done, says Stace Nield, a sales professional for Ardex Engineered Cements, the flooring materials supplier for the project. “That job was extremely challenging because of the multiple substrates and the varying elevations.”

For instance, in some areas the Berger crew was dealing with a quarry tile substrate, while in other sections the challenge was porcelain tile installed over tongue-in-groove plywood sheets over floor joists.

Some areas, says Nield, “were a complete disaster” after multiple renovations over the structure’s century of life. “Just try pouring self-leveling cement with a change in elevation every four or five feet.”

But the job got done. Here’s how.

Upstairs: Only at night
The 17,000 square feet of ceramic tile was to be transformed into a stylish polymer-modified cement diamond-design floor.

“It was the most difficult floor design we’ve ever done,” recalls Bill Young, division director for E.B. Berger. “And we had to work quickly enough that we could open up each section for traffic the next day.”

All after-hours progress had to come to a finish point that would let them, by daybreak or so, spread paper to accommodate daytime users. That routine provided even more opportunity for failure.

“How do you constantly stop and start pouring over a large designed floor and make it all look seamless?” Nield asks. 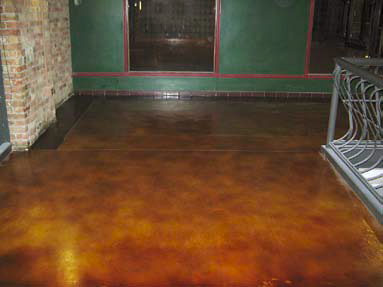 Bill Young’s brother, Jason, served as project manager. He and his patient crew, which numbered about eight on average, undertook a couple thousand feet of flooring per night, and spent about four nights per section. Here’s how it went, day by day:
-Day one: Shot-blast the ceramic tile.
-Day two: Pour a coat of solvent-free, two-component Ardex EP-2000 Substrate Preparation Epoxy. “We threw sand in it to create a better substrate,” says Bill Young.
-Day three: Pour Ardex SD-T Self-Drying, Self-Leveling Concrete Topping, and cut a diamond pattern and border to take on the appearance of fine tile.
-Day four: Seal and stain in two colors. “That was a real challenge, staining and sealing the same day,” says Bill Young.

Downstairs: Blast, clean, repair, beautify
The initial challenge here, says Bill Young, was to remove “30 years of wax” that had turned the floor dark and dingy, then painstakingly repair and bring back to life the century-old pavers. Working a few thousand square feet at a time, Jason Young and his crew were to complete the following routine over and over again throughout a five-week period:
-Day one: Shot-blast the brick to remove layer after layer of wax buildup.
-Day two: Clean pavers with a pneumatic needle scaler and repoint the grout.
-Day three: Painstakingly repair broken pavers with colored cement.
-Day four: Apply two coats of MMA floor coating for the toughest possible finish against heavy foot traffic. 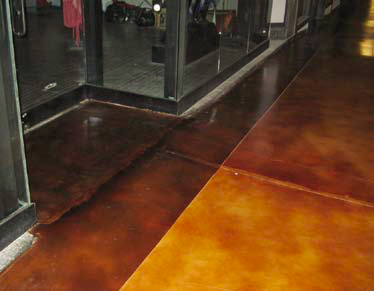 Aged beauty
When the job was completed, floors upstairs and down had a rich, bright, multicolored appearance that enhanced the building’s history rather than diminishing it.

“They didn’t want a perfect look,” says Jason Young. “They wanted the place to show its age.”
That’s no wonder. Trolley Square is listed on the National Register of Historic Places as well as being a Utah Historic Site. Brand spanking new was a style that just wouldn’t accommodate the century-old, mission-style structure. 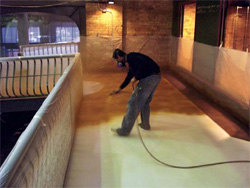 Weston Woolsey from Okland Construction, the general contractor, was especially pleased with the downstairs brickwork. “I thought they did a pretty decent job of stripping and redoing the pavers,” he says.

As for the upstairs concrete, the jury’s still out: “The only issue I saw was that the finish seems to wear off, but they’re going to take care of that,” says Woolsey.

Jason Young addresses that situation: “There are a few reasons for the sealer wearing off. One is, they are still in the middle of heavy remodel construction (and) they have man lifts and other heavy equipment going across the floor.”

The salt used in Utah to melt the ice in winter is also partly to blame, Young says. When tracked in, the road salt “kind of acts like a sandpaper,” he says.

The fix isn’t difficult, Young states. “We only have to completely clean all contaminants off and reseal.” With that done, “the material re-emulsifies and bonds to the original coat.”

“People think cement is bulletproof, but it’s not,” observes Nield of Ardex. “You’re putting on a paper-thin layer of color followed by a thin layer of sealer. There’s nothing to protect that finish against the kind of traffic you’ll get in a mall except by maintenance.”

A final coat of polish and wax should protect against scuffing and salt damage, he predicts.

As for the quality of the work by E.B. Berger, Nield says: “It’s absolutely a good job. The workmanship was very good. But it’s a learning experience. There’s not another contractor in Utah that could have pulled that off.” 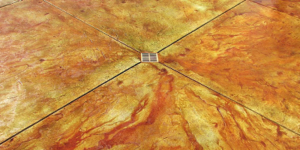 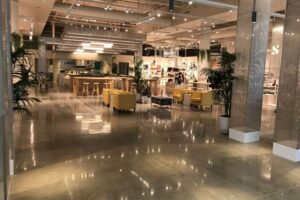 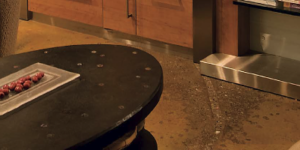