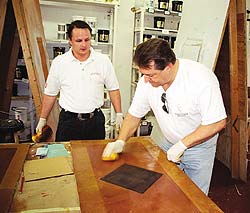 Some people are good at doing, while others are better at teaching others how. When you find you have a natural talent in both directions, it generally pays to run with it.

That strategy has definitely worked for contractor Wes Vollmer, of San Antonio, Texas. Vollmer, who has eleven years of decorative concrete experience, has spent the past seven years consulting on jobsites around the country. He opened his own training school in San Antonio a couple of years ago with great success.

The overwhelming response to his training has caused him to take it a step further. In February, Vollmer will open decorative concrete training schools on opposite coasts — in Atlanta, Ga., and in Oregon, at the Institute for American Craftsmanship. The schools will operate under the supervision of top-notch contractors in each area: Dale Drath and Mike Allen of Drath & Allen Concrete in Atlanta; and Doug Carlton of Carlton Concrete Co. in Visalia, Calif.

At the ASCC annual meeting, held in Dallas in September, Vollmer gave a presentation on his specialty: acid staining. He kept it basic, concentrating on tools, preparation and the essential steps of the process. The class, filled to overflowing, was a huge success, he says, adding that he was "bombarded by people who want information."

Vollmer believes in keeping beginning classes at a basic level and encouraging contractors to build their skills over time. "Instructors always show their best work [in the classes]," he says. "It’s great, but it’s confusing. I wanted to show how you can get to that level."

Vollmer’s schools will open in February under the name "Alternative Finishes: Your Contractor to Contractor Training." The classes will not be manufacturer-backed, so they won’t push any particular products. All classes will be taught by experienced professional contractors (not sales reps) who have no less than 10 years experience.

Classes will cover acid staining, overlays, stamped concrete, walls, countertops and much more. "We’ll offer unique finishes that no one else knows about," Vollmer says, declining to give away any secrets.