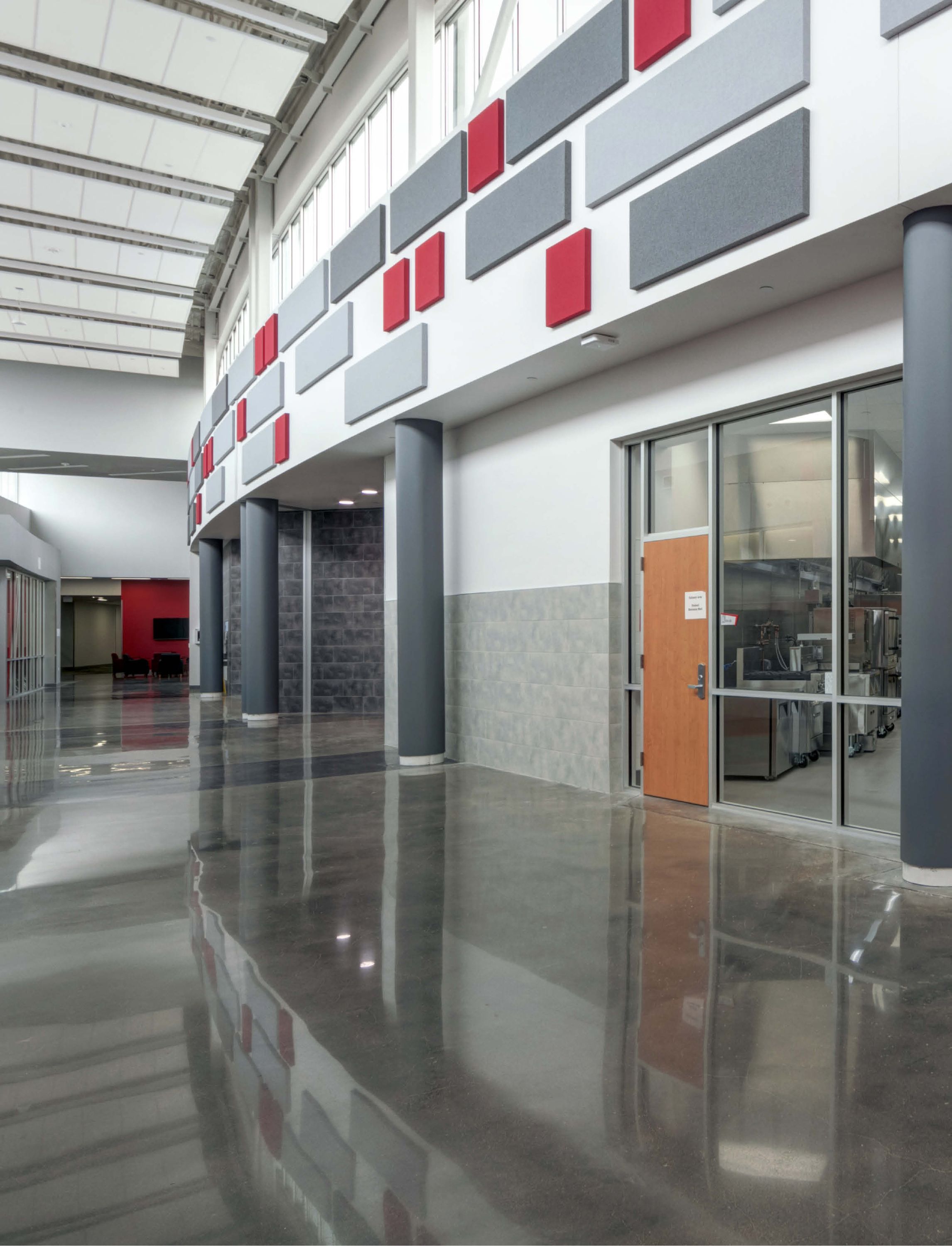 Texas-based VLK Architects is no stranger to being recognized for its outstanding accomplishments when it comes to designing public schools such as the monumental and expressive Dan Dipert Career and Technical Center.

“I’d give it an A for sure,” says Sloan Harris, a partner with VLK Architects, about the sprawling 165,000-square-foot CTC that’s being heralded as the flagship campus for the Arlington Independent School District. 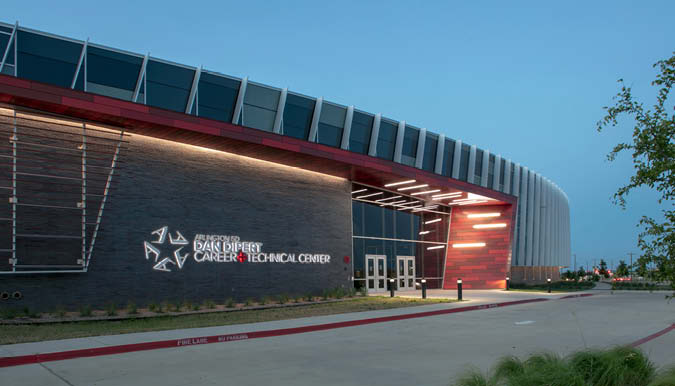 Purposely located in a socio-economic diverse area of the district to spark reinvestment and development, the CTC opened in 2017 and serves some 2,400 high school juniors and seniors from across the district. The two-story facility houses 18 specialized academies that focus on topics of interest ranging from automotive repairs and cosmetology to culinary arts and welding.

These academies, sectioned off with windows, are clustered around a large, open interior space called “Main Street.” Passers-by can see into the academy settings where education is constantly on display. The setup was conceived to emphasize transparency and to promote collaboration and connectivity. 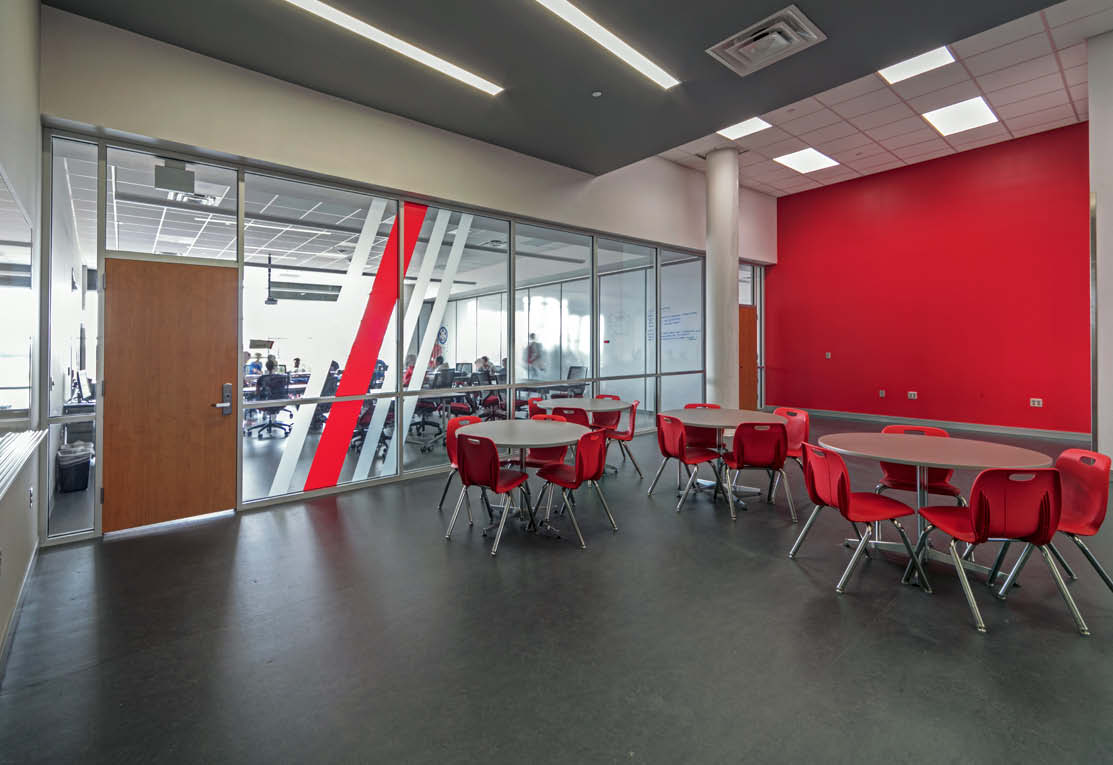 Committee consensus
To come up with the overall design, VLK Architects uses a tailored “stakeholder engagement experience” called VLK|Launch. The process brings together all the project’s stakeholders — students, teachers, administrators, parents, community leaders and industry leaders — to exchange views and information to help develop a design based on what the space will be used for.

“One of the committee’s priorities was the center had to have more of a corporate feel than that of a typical high school,” Harris says. “This led us to lean toward the use of concrete (on the floors) because it can be used in so many different ways to produce many different finishes.”

Very durable, long-lasting, low-maintenance materials were also high on the committee’s list, he says, and polished concrete fell into all three categories.

“We have been specifying polished concrete for about 12 years,” Harris says, especially for facility floors that get heavy use or are under a lot of stress. “We like to use it to enhance the design of public space because of its many patterns, dyes and different levels of grinding.”

In the CTC’s case, Harris says, about 80% of the floors were specified to be polished concrete.

Going from failure to passing
Unfortunately, the other trades went about their business without protecting the floors during construction, says Polished Concrete Consultants’ David Stephenson, who oversaw the CTC’s concrete placement, finish, polish and maintenance. 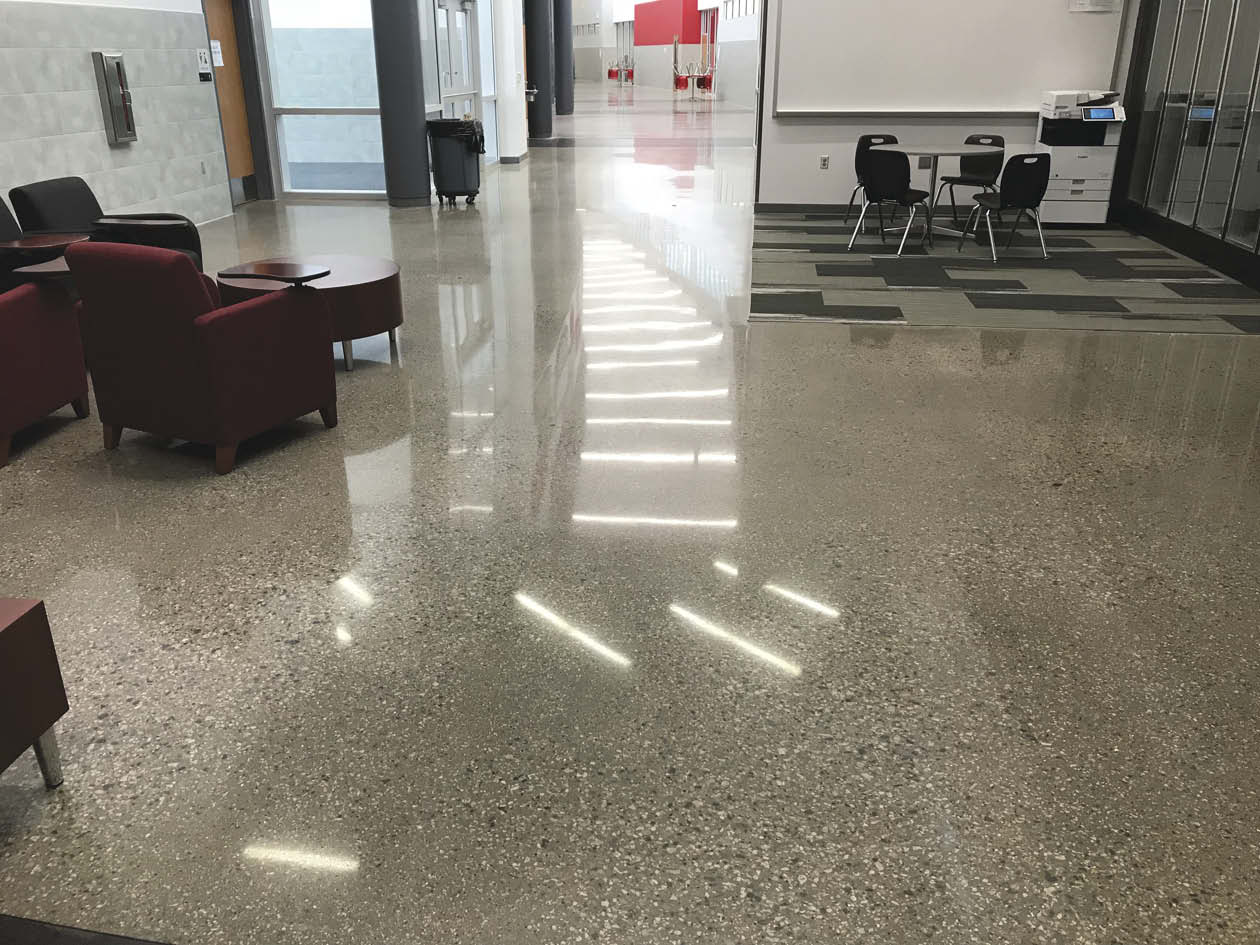 When it came time for the clients to accept the final finish, they had to reject the concrete — not because the overall design wasn’t met or the work wasn’t done to specifications, but because of the extensive damage to the surface.

“The overall lack of care resulted in gouges and divots all over the concrete,” Stephenson says. “Millions of them came from screws in the tires of heavy lifts and nails in pallets that were dragged across the floor.” 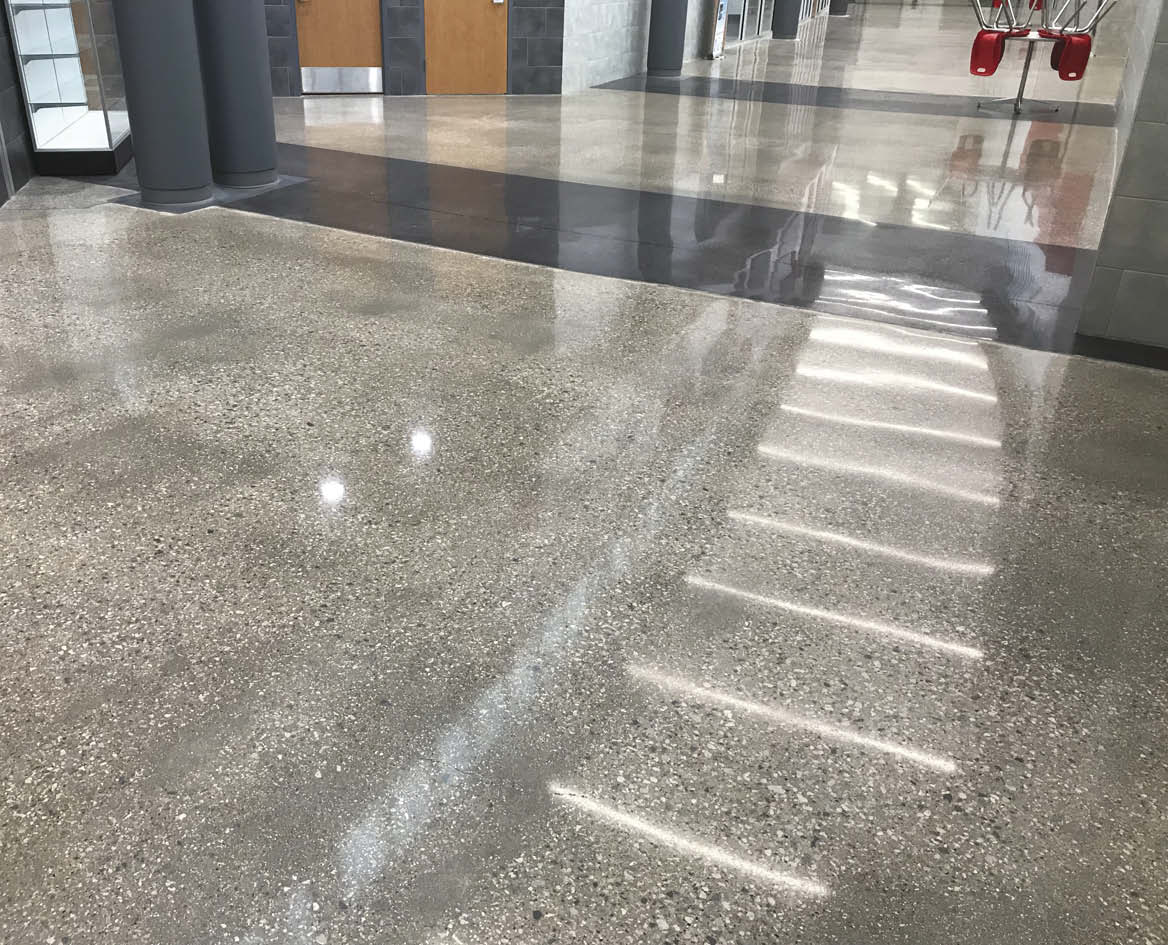 They had two options to remedy the situation: put a new floor finish over top the concrete or grind down deeper than the damage.

“The district wanted concrete for a reason,” Stephenson says, which was for its durability and low maintenance, not to mention the heavy industrial uses in the construction-related labs. “The best option was a deep grind through the damage — a whole lot deeper.”

The polishing crew from ModernCrete Concrete Designs ended up removing more than 9 tons of concrete, exposing nickel and quarter-sized rock. “The exposed large aggregate opened up air voids so we had to come back through with several coats of epoxy grout to fill them in.”

In the end, Stephenson says, “Parts of the floor have a terrazzo appearance and an extremely high gloss because it was ground so many times.”

What could have been a major fiasco, he adds, “turned out to be one of the nicest jobs we’ve done in a long time.”

Scope of Project: Specifying, placing, finishing and polishing floors for a 165,000-square-foot career and technical center.

Biggest Challenge: Repairing the center’s concrete floors that were damaged with millions of divots and gouges caused by other trades during construction.

Accolades given to the CTC in Arlington include:

The Fort Worth Chapter of the American Institute of Architecture’s Honor Award, the organization’s highest recognition for building design. All Design Award entries are evaluated for design excellence regardless of size, budget or project type.

Selected as a finalist for the 2018-19 Caudill Class of the Exhibit of School Architecture competition by the Texas Association of School Administrators and Texas Association of School Boards. To be considered for these groups’ highest recognition, a project must receive at least four stars from six areas of distinction: Design, Value, Community, Planning, School Transformation and Sustainability. The Dipert Center received five.