Creative contractors lookingfor new ways to boost their profits and differentiate their work would be wise to check into the stencils available from Stencil Systems Inc. and its distributors.

Headquartered in Sandy, Utah, Stencil Systems is part of the Decorative Technologies Group, an Australia-based company that manufactures and supplies more than 60 million square feet of products annually to more than 25 countries.

In addition to its large selection of high-quality stencils — as well as custom-cut logos and designs — Stencil Systems offers an extensive range of color hardeners, color dispersants, modifiers, release agents, acid stains and decorative tools for use with concrete cast-in-place projects. Most recently, the company, which has been operating in this country for the past seven years, added Cover-tex, a decorative overlay that is sprayed onto existing concrete and is formulated to work with stencils.

Comparing stencils to stamps, “You can be a lot more creative with stencils as far as the application goes,” says Clark Paepke of Stencil Systems. “The only limitation is your imagination. We like to encourage contractors to think outside the box, to be creative, to manipulate the stencils.” 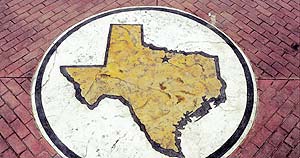 A pattern on the floor can continue up a wall or onto a stair riser and over a tread. With the snip of a regular pair of scissors, you can create endless design variations. And that’s not even counting the colors and finishes that can be applied over the design.

“Another advantage of using stencils with the variety of finishes that can be applied is that you end up with a consistent finish,” says Chad Austin of Salt Lake City-based Cencotech, Stencil Systems’ West Coast master distributor. “The surface texture is much more even.”

With 26 field patterns, six borders, five circles and a diamond, there’s plenty to manipulate, mix or match. The field patterns come in 1,076-square-foot rolls made of a polycoated paper. They are only good for one job, but they can be repositioned if the need arises. Paepke recommends figuring the cost of the roll into your job estimate.

How can stenciling increase your profits, you may ask?
“You can do a greater amount of square footage in less time,” explains Scott Maxfield, president of Cencotech. Once they get comfortable with stenciling, contractors are more productive, he says. “Normally, they’re in and out pretty much the same day. Stamping, on the other hand, can take three times that long, and it’s more work.”

Stenciling is less labor intensive because you don’t have to continuously pick something up and reposition it, says Jerri Adams, who co-owns Texoma Decorative Concrete Supply in Wichita Falls, Texas, with her husband, David. The company is Stencil Systems’ master distributor for the East Coast. “You can have two to three guys handling a fairly large job while it takes twice that many to have four or five stamps running.”

Help is yours for the asking
Besides distributing all of the products needed to create, color, texture and seal stenciled concrete, Paepke says, “We pride ourselves big time on technical support, and we have a network of contractors and dealers all over the United States who will take time out from their business or projects to help others in the field.”

If you call with a problem, “We’re going to help you right then on the phone,” he says. “You won’t get that salesman attitude reply: ‘Let me look into it and get back with you.’ We’ll provide information right then and there or quickly find someone who can.”

You won’t find Stencil Systems products in The Home Depot or other similar retail stores. Both master distributors sell directly to contractors in their territory, as well to a select group of local distributors that meet certain criteria. To keep business profitable for all, local distributors don’t compete with one another. “We don’t want to create a ‘Black & Decker effect’ and have too many distributors in one area,” Adams says.

For those of you wondering, there are no franchise fees. “You don’t have to pay to play,” Maxfield adds.

“It’s our goal to have enough distributors so that everyone is within a two-day ship,” Adams says. Last March, for instance, Texoma welcomed Mt. Union Lumber & Supply in Pennsylvania on board to distribute wares in a nine-state region. “It all comes down to better customer service,” she says. 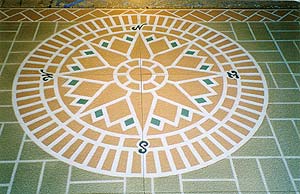 Contractors are king
Any way you slice it, Paepke says, the contractor is the ultimate customer. The company makes it its business to listen to what contractors have to say about its products, which are constantly being fine-tuned and improved “by the contractor, for the contractor.”

Both master distributors offer free training seminars to their customers. Seminars are routinely held in Texas and Utah, as well as other locations around the country. Basic seminars are usually held in the spring while advanced seminars are offered in the fall. Both run for two days. For more information on upcoming seminars, check www.stencilsystems.com for dates and locations.

Paepke recommends that those new to stenciling start with a smaller area than they would normally tackle. “Give yourself a little cushion area when you first start out. It’s a lot different from a seminar setting to an actual job. Keep it basic and simple and build from there. Don’t bite off more than you can chew. 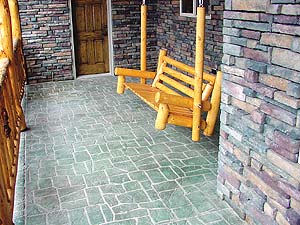 “There are certain rules you have to follow when using stencils,” Paepke continues. “We teach the basics but then you take your creativity and apply that to our process. You can have your own special technique and create your own special look. Decorative concrete is an art. If you can stencil and stamp, you can get some gorgeous looks you can’t get with just one or the other.”

Contractors should be concentrating on their technique, he concludes. “The last thing we want you to do is worry about the product.” And with Stencil Systems, that’s not part of the pattern. 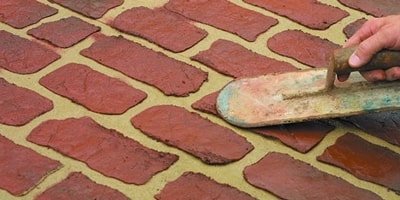 To enhance newly-poured concrete or to rejuvenate existing concrete, stenciling is a decorative application worth considering. It may seem like a simple process, but a few fine points separate nice-looking, profitable stencil jobs from the rest. We’ve asked some experienced stencilers for tips to elevate your stenciling jobs from so-so to spectacular.

Staying on Top of Stenciling 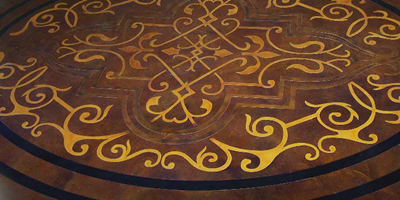