Whether your next job involves stamping, texturing, staining or sealing (or all of the above), working up an estimate requires lots of advance planning. Seasoned contractors agree that if you want to make a profit, you have to take time to consider every factor of the project.

The good news is that you can make more money on decorative concrete than on plain old flatwork. Prices can increase by anywhere from $2 per square foot to as much as $13 per square foot in some states. Your crew will need to be better trained, so you will need to pay them more, but of course you can charge them out at a higher rate as well.

Here are some estimating tips from industry veterans:

A large staining project is generally bid at a lower price per square foot than a single room, says Wes Vollmer, owner of Alternative Finishes in San Antonio, Texas. Other factors to consider: What is the layout of the area? How elaborate is the design? How many colors will you use? Will there be a logo?

Don’t bid too low, he says, or you will compromise quality. “It hurts the industry as a whole when guys are staining concrete for $1 or $1.20 per square foot. They have to do it in too much of a hurry.”

For stamping, what pattern you are using makes a big difference in how much time you need to allow. The stamps may be difficult to line up and difficult to move. If it’s complicated, be sure to allow more time, Vollmer says. Spend time troubleshooting potential problems. Is everything going to line up so it looks good? Also, think in advance about working your control joints into your pattern.

Around San Antonio, stamping generally goes for between $4.50 and $8 per square foot. If you’re using texture skins rather than stamping tools, you can charge less, because you can stamp up to 2,000 square feet per day with 5′ x 5′ mats, Vollmer says. “But if you’re estimating pool copings or stairs,” Vollmer says, “be sure to charge by the linear foot.”

Dana Boyer, of Arizona-based ConcretiZen, is earning a reputation for pushing the envelope in decorative concrete. “I look at what the people want and how they’re going to use the finished product. Will it be maintained? Will there be color separations? How many days will the job require? There’s a lot involved. I price according to what they’re asking for.” Boyer notes that it also helps to be a part of the project from its onset so clients can readily communicate their expectations.

Square footage is an obvious consideration, says Rick Smith, president of Richard Smith Custom Concrete, but it is the hidden costs like gasoline for travel to far-flung project sites that the contractor needs to remember. “There’s so many factors that go into it that unfortunately the only way to learn it is by bumping your head up against a wall or not seeing it on the initial walk,” says Smith. “Every client wants to have something a little bit different, so you have to be more creative. In the estimating part, the most important thing is your labor and your man hours.”

Overhead is another consideration. Bob Bauer, president of Concrete Coatings of Illinois, explains that he generally looks at materials and labor when estimating and that approximately 18 percent of his sales is figured for overhead. Boyer has calculated that $2.50 a square-foot is the minimum she can charge to cover her operational expenses. Within her overhead, she generally estimates a three to five percent variable for any hidden expenses a job may incur. The few hundred dollars become profit if all goes well but act as a safety net guarding her profit if extra costs arise. Other contractors routinely figure on hard costs plus 30 percent.

Location plays a role in estimating as well. Boyer notes that while the market in New York might support concrete staining at $60-$100 a square foot, those prices would never be competitive in, say, Texas. Location may also explain why some areas seek out the best decorative concrete experts and others still hone in on the bottom line.

Reputation makes a difference
From his base in Los Angeles, Smith finds his clients seek out his expertise and are willing to pay more for it, no doubt a benefit of being in a market where decorative concrete is in high demand.

Vollmer agrees that contractors who are on time, organized and dependable can definitely command a higher price. “The more organized you are, the better your reputation, the more you can charge,” he says. “They are trusting you to think of every little detail.”

“We sold some jobs last year even though we were the highest bidder, because of the client’s confidence in us,” says Concrete Coatings’ Bauer. “But there are about 20 percent of our customers where bottom line price is what will make the decision.”

Boyer often fields calls to correct concrete done by lesser artisans at a bargain price. “I run into a lot of people who are unhappy with their concrete,” she says. “My prices are reasonable and I probably could charge more, but I don’t because I’m trying to push decorative concrete in a new direction. Still, I would tell people, ‘you get what you pay for.’”

She asks a lot of questions before creating her estimate, probably more questions than the average contractor. But her thoroughness and the time she takes crafting her estimates hopefully translate into profit in the long run.

Estimating software
Estimating software programs range in price from $2,400 to $10,000. These programs offer digital take-off software linked to a custom database. They are aimed at making the contractor more efficient and accurate in his estimating process, thereby saving time and money. But the software does not seem to have caught on among decorative concrete contractors, who find the variables on a job can be tremendous. “We don’t use estimating software,” says Bauer. “We’d need three programs for all we do.” His company uses QuickBooks to handle estimates, while others have found that a well-organized Microsoft Excel template also works.

Vollmer has used estimating software and eagerly awaits the time when a program is designed specifically for decorative concrete. “For the bigger guys, estimating software is a must,” he says. “It cuts your time in half.” If a contractor ends up working up five or six plans in a day, he says, he could go home, scan them in, and come up with an almost instant total for each job. “It would tell you how much release you need, how much stain, how many guys … I’d be very interested in that,” he says.

Training improves speed, workmanship
The consensus among contractors is that the only way to cut price would be to cut labor, not a good idea in a field where artistry is essential. “This business is pretty much all the same in the sense that it’s all labor. That’s what’s going to make or break a profit margin,” says Smith. “If you can move faster with less people — that’s where you’re making money.”

It’s generally agreed that sending your crew to decorative concrete workshops more than pays off in good workmanship and time-saving techniques.

Like decorative concrete itself, estimating is a learned craft requiring meticulous attention to detail. The time you spend in compiling your estimate will more than pay for itself when you find yourself getting things right the first time. 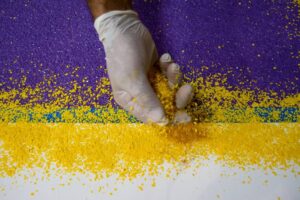 Coverage Rates
Determining How Much
Decorative Product is Needed 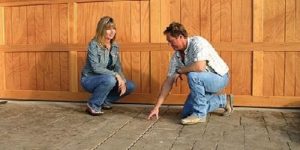 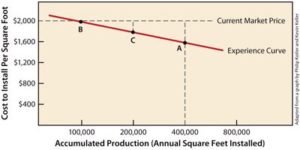 The Science of Setting the Right Price for Your Services