Remember the ship from “Pirates of the Caribbean: Dead Man’s Chest”? Or the John Harvard statue that students gathered around during the hazing scene in “The Social Network”? What about the boat dock from the Hollywood version of “The Girl with the Dragon Tattoo”? Each one of those constructions was coated with the resurfacing and texturing product Bond-Kote, from Super-Krete International Inc., a concrete overlay manufacturer based in El Cajon, Calif.

Veteran studio plasterer Adam Barker worked on set pieces that appeared in each of the above movies, as well as set pieces for popular Hollywood movies such as “Three Kings,” “Erin Brockovich,” “Ocean’s Twelve,” “Ocean’s Thirteen” and “Transformers: Dark of the Moon.” A professional in the movie production industry since the mid-1990s, Barker witnessed the introduction of Bond-Kote, as well as Super-Krete’s microtopping product Micro-Bond, into the industry in the mid-2000s. Today, Barker says, the two Super-Krete products are the standard industry choices for coating set pieces and floors in Hollywood, as they help plasterers create sturdy canvases for the finishing touches applied by painters and set dressers. 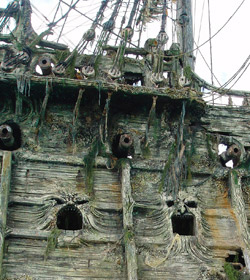 Prior to working with Super-Krete products, Barker says he and fellow set constructors would coat floors and set pieces with thick materials such as sand and cement in 3/4-inch-thick layers, then hand them over to painters and set dressers. But the laborers longed for a product that would easily stick to any type of material from foam to resin to plywood, could be applied in a single, thin layer and wouldn’t chip off. A colleague of Barker’s took note of Super-Krete products on display at a trade show but was hesitant to introduce them into movie set projects. “In this industry, you don’t want to be the first person to take a chance on a product before it’s proved itself,” Barker says.

Once Super-Krete’s products made their debut in the industry, no one looked back.

Bond-Kote is mixed with water to create a sticky paste and applied with a squeegee, sprayer, trowel, brush or broom in a 1/8-inch-thick layer. When it dries, the surface is ready for paint and other decorative toppings. The light, powdery Micro-Bond can be mixed with Bond-Kote to produce a smoother consistency. When the two products are used together, the result has a look and texture similar to granite, Barker says. 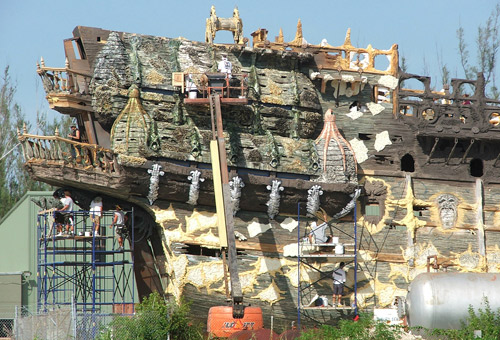 Barker recently used Bond-Kote mixed with Micro-Bond to transform a wooden stage floor on the set of the as-yet-untitled “Star Trek” sequel. He and other crew members covered the existing floor with sheets of felt to create a barrier, then coated the felt with the Super-Krete products. The products acted as a base coat to which they applied mounds of sand and USG Structo-Lite Basecoat Plaster, creating a bumpy, gritty texture that portrayed how the eroded surface of another planet might look. After filming, the crew stripped off the dried resurfacing materials and felt pieces, revealing an undamaged wooden stage floor.

For “Cowboys & Aliens,” Barker and other plasterers used two and three coats of Bond-Kote on set pieces that artists carved out of foam to look like cave walls, cave floors and a spaceship. He says the product passed the ultimate durability test on this particular set, as the cave pieces endured heavy foot and equipment traffic and the spaceship prop had to be transported several times.

“The caves in ‘Cowboys & Aliens’ had to be walked on, leaned on and run through, and there was a lot of dolly traffic,” Barker says. “The spaceship had to travel to two locations, and because we used Bond-Kote, it didn’t look like it had been beat up.”

Super-Krete president Tracey Lackovich says Bond-Kote has the ability to stick to many types of surfaces, can be textured using various applicator tools, and creates a base to which paint, stains and sealants can adhere. It’s also odor- and chemical-free, which is a benefit for the other workers on set, she says.

Lackovich explains that set workers tested a number of products during the set production process for “Pirates of the Caribbean: Dead Man’s Chest,” the first film for which Super-Krete products were used, and ultimately picked the Super-Krete overlay for its flexibility and strength.

“They needed something that would coat an existing steel ship and resist the ocean water,” she says. “The material also had to allow stunt people and actors to jump on and beat up the ship without damaging it.”

Barker reveals that competition between various set constructors and artists can be intense, and plasterers must ensure their applications of Super-Krete products do not overshadow the work of the foam sculptors.

“The sculptors want to see their work, and with these products, we can create textures that showcase the foam carvings, but make the material look like it isn’t foam,” he says. “Then the painters and set dressers can come in after me. Super-Krete products are organic materials, and they work well with paint.”

Barker’s role in the production of a big-budget movie, while seemingly small in the grand scheme of things, is all about building backgrounds that appear true to life, he says.

“We’re creating textures that translate over to the real world,” he says. “We want to make the actors feel like they’re there and then let them do their thing.”

Barker currently has several new movie set projects in the works, but he’s also keeping busy launching his online business, L.T.D. Castings. For this new venture, he’s using foam forms and Super-Krete products to make home and garden items such as hose pots, propane bottle covers and speakers that resemble rocks. He plans to sell these works to the public online.

Tools of the Trade for a Hollywood Artisan

Aside from Super-Krete’s Bond-Kote and Micro-Bond, here are the products and tools Adam Barker says are by his side at work: 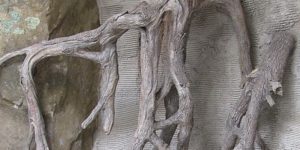 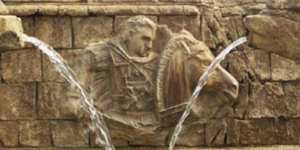 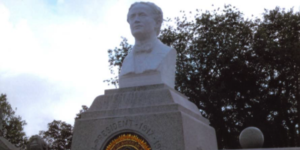