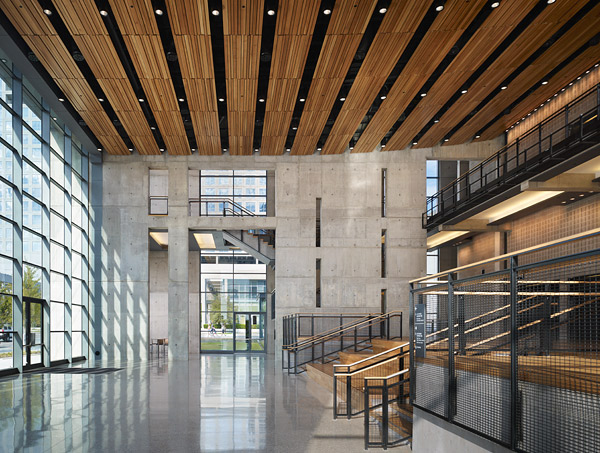 Located at the intersection of Routh and Flora streets in the Dallas Arts District, the Dallas City Performance Hall (DCPH) opened in September 2012. Concrete played a major role in its construction and as the interior and exterior finish.

Constructed in two phases, the facility is an all-concrete frame structure made up of linear pavilions capped with varying wavelike forms that compose the roof. The two-story structure is built of six parallel walls that are 18 inches thick and that vary in height from 35 to 85 feet.

Phase One, which opened in September 2012, features a 750-seat proscenium theatre, a multilevel lobby that offers open space for receptions and small performances, backstage spaces, and an event area on the balcony level. Phase Two will eventually include two additional theaters, an art gallery, a cafe, and rehearsal and classroom space.

The interior utilizes steel-and-wood railings and poured-in-place architecturally exposed concrete walls. The architect required six different patterns of articulated board-form walls with random widths and length on the interior of the audience chamber, says Wesley Moncrief, McCarthy’s project manager for this job, so three different mock-ups were made. The walls are the building’s most striking feature: rough-hewn board-formed concrete of different dimensions, and with random depth placements, that provides visual interest while enhancing acoustics.

SmartSide Soffit boards — approximately 1/4-inch to 1/2-inch wide pieces of fiberboard that have an exterior woodgrain finish — were applied on layers of plywood to give the wall the board-form finished look. “To ensure quality control and to avoid bug holes and honeycombing, we vibrated the walls every 2 feet,” says Moncrief. “It literally looks like wood grain. The architects and designers were very pleased with the outcome.” 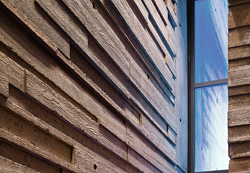 While the interiors are all exposed architecturally finished concrete walls, the entire outside was hand-polished by workers using M74 Micron flexible diamond hand-sanding pads. The project’s architect wanted a more uniform look on the large exterior walls, so the workers sat on aerial lifts and, according to Moncrief, used “case after case” of the pads to sand the entire exterior surface. “The diamond sponges were used to to get rid of water stains and other elements that had built up on the wall prior to us having the opportunity to apply a waterproofing clear sealer,” says Moncrief. “We didn’t want to apply the sealer and trap the stains that had accumulated through natural causes, such as rain and anything in the air from living in a metro area and near an airport.” Sealer was applied immediately after the sanding was finished.

The lobby and common area floors are deep-ground polished concrete placed by Texas Bomanite. All told, the job utilized 8,000 cubic yards of concrete.

The 100 percent publicly funded building was completed on a tight budget, and the many forms and functions of concrete helped the team to complete this building within budget. The completed project is expected to be certified LEED Silver.