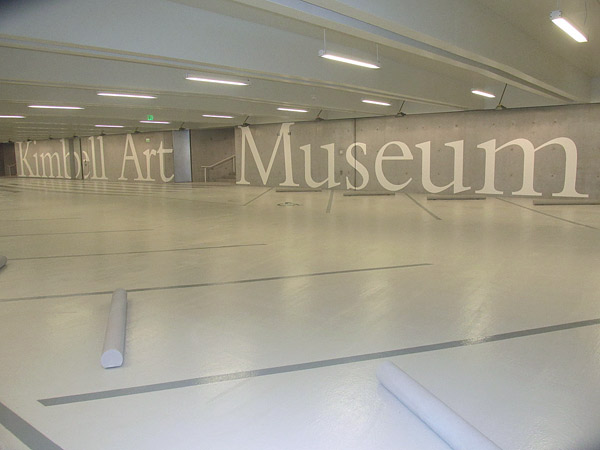 The Kimbell Art Museum houses one of the country’s most well-known collections of art. The original building, designed in 1966 by Louis I. Kahn, opened in 1972. In 2010, ground was broken on an expansion, this time utilizing the design of Italian architect Renzo Piano.

The Piano Pavilion opened to the public on Nov. 27, 2013. It houses classrooms and studios, an auditorium and gallery space.

To make room for more visitors, planners envisioned a large underground parking garage. HP Spartacote’s Sparta-Guard PURE, a VOC-free polyaspartic floor coating system, was chosen for nearly 60,000 square feet of flooring for the car park and entry ramp. The flooring needed to not only be functional but also aesthetically appealing. “The parking garage almost looks like part of the museum,” says HP Spartacote regional manager Michael Brents. “And that was part of the goal. They want you to have part of the museum experience even though you’re not in the museum yet. I think it’s noteworthy because they accomplished that.”

HP Spartacote’s Sparta-Guard PURE system included Hydro-Shield SL moisture mitigation primer, custom-pigmented Sparta-Flex PURE, and a Diamond-Topp polyaspartic topcoat. “The architectural and design team had been familiar with an HP Spartacote application in a parking garage that was completed several years prior,” says HP Spartacote vice president of sales and marketing Ben Grier. “When it came time to specify the appropriate system, we had the opportunity to work closely with their team to design a system that met their requirements.”

The crew worked under a very constrained schedule for installing the car park. “One day was the difference between success and failure,” recalls Grier, “so the general contractor required a flooring system that would allow for rapid cure and return to service capabilities. Additionally, ambient environment temperatures were dropping into the 40s at night.”

The floor was below grade, so the design team felt it was best to install a moisture mitigation primer. “The existing concrete had a heavy-broom finish, so the prep was challenging. The contractor (Southwest Construction Services, of Dallas) profiled the surface to CSP-3 with a large riding shotblaster to cover the large floor in a short amount of time.” Following surface prep, the installation team applied the moisture mitigation primer over the entire floor.

Then, crews applied two custom-pigmented coats of Sparta-Flex PURE polyaspartic. The design team chose a custom light-silver/gray color, which was a blend between HP Spartacote’s standard light gray and white colors. The color complements the lighting and the ornate concrete pillars found throughout the garage, as well as the lighting scheme of the gallery proper, which bathes the environment in a reflected silvery light. 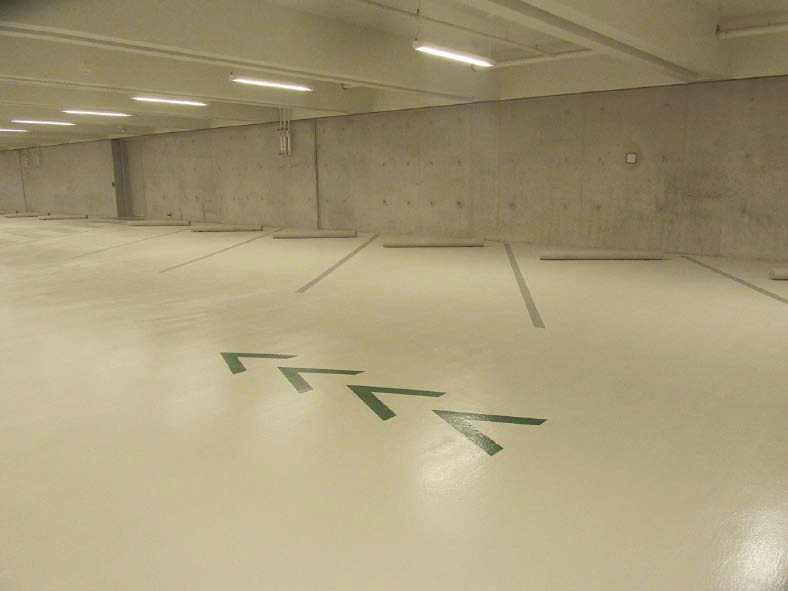 After that, the design called for ornate and detailed striping plans. The architect’s team wanted the markings to offer contrasting dark gray and green colors, which according to the architect, allowed the floor to “breathe.”

The Diamond-Topp topcoat provided a slip-resistant matte finish while offering a highly durable wear surface. “The texture is one unique attribute to that project,” says Brents. “The Diamond-Topp has a really fine microtexture that’s accomplishing your slip resistance and yet it’s still cleanable. The nature of that texture is so fine it almost feels like frosted glass — it doesn’t feel smooth but it doesn’t feel rough either.”

Despite the constrained schedule, the garage opened on time. “It’s holding up and performing great,” says Grier. “The colors and angles found throughout the entire structure are very impressive.”

Scope of work: A high-traffic parking garage and entrance ramp