San Diego County is known far and wide for its beautiful weather, interesting people and endless summer atmosphere. So it was with great anticipation when San Diego was picked as the site for the 2016 Concrete Decor Show Sept. 25-29 that it was destined to be one showstopper of a show. And all indications point to that premonition coming true.

Just to set the stage, take a look at some of the decorative concrete projects we discovered in the area. When the show is over, we’ll have left more behind at The Bannister Family House, a facility at UC San Diego Health that houses relatives of acute-care patients. The show’s hands-on workshops will transform the house’s ordinary courtyard, retaining walls and walkways into concrete artistry that will help brighten the stay for many patients’ families.

The biggest challenge facing General Coatings of San Diego when it came to the La Jolla Village Square Mall was it had to be resurfaced while the very popular shopping center was open for business. To accomplish the task of resurfacing the 28,000-square-foot interior flooring, crews worked split shifts, with most of the work done at night.

“It was a pretty straightforward job,” says Todd Seaboch, general manager of the architectural coatings division of General Coatings — one color, no border, no stamping, no saw cuts. “We came in on time and on budget.”

The company placed Westcoat TC-4 overlay on the existing slab and applied a skip trowel texture by hand. This finish was best suited for the job, Seaboch says, “because the texture allowed us to blend all the stop and starts” seamlessly.

Low VOC products were a priority since mall life went on as usual during the duration. The floors were colored with Westcoat’s SC-35 water-based stain in Onyx, coated with EC-32 clear epoxy and sealed with a final coat of SC-66 satin water-based polyurethane.

Work on the floors in common areas of the mall was completed in December 2015. “The only thing we didn’t do was the escalator,” Seaboch says with a laugh.

Concepts in Concrete Construction has been working with SeaWorld for the past several years says Rick Gardella, company president whose been involved with decorative concrete since the late 1970s. “Every year we go back and tear out the old dilapidated concrete and replace it with texture imprinted concrete that has integral color and a color hardener.”

The park started extensive renovations in 2014 and built a new section in 2015 called Aquatica. “It’s got the biggest waterslide they have,” Gardella says of the new mat racer ride. For that project, he used Light Tan from Solomon Colors to integrally color the mix and Stamped Concrete’s Canyon Tan color hardener with the same company’s Autumn Brown antique release.

“SeaWorld wants color throughout the concrete and a color hardener. That’s one of their requirements,” he says. “They want the best of both worlds: colored all the way through and a hardener that gives you a nice finish and doesn’t fade.”

Gardella says his company, which he founded in 1986, has done the concrete work for SeaWorld’s last three biggest projects: Shipwreck Rapids, the Dolphin Stadium and Manta, the new roller coaster. “There’s tons of stamped concrete on that one,” he says, and lots of stained areas, too. His company used a Bomanite Coquina texture on that job with broadcasted beach glass and mother of pearl shells. It also helped create the black room with black concrete where riders view a movie before getting on the ride which launches them through a tank of manta rays.

As part of the mountain lion exhibit at the San Diego Zoo, a new viewing platform was installed in 2014. Concepts in Concrete Construction, with concrete delivered by Hanson Aggregates, finished the new slab with a 6-inch wood plank pattern stamp from Bomanite. The concrete was integrally colored with San Diego Buff from Davis Color and accented with a Walnut antique release from Stamped Concrete in Oceanside.

When it came to sprucing up the courtyard at the Best Western Plus Suites Hotel in Coronado, Covert Coatings was up for the challenge. With a two-day deadline and only a five-hour window each day to apply the coatings, the company was on a very tight schedule with a small crew of three. The hotel had been painting the old-style steel-stamped concrete in the courtyard every other year and the thick paint layer was peeling, which made it hard to repair the damaged surface.

“We tried sandblasting it but ended up damaging the surface before it would strip out the bottom of the grout lines,” says Barak Covert of Covert Coatings. After realizing the surface had to be stripped, the hotel manager decided to have his own men do that part of the work in small sections the week before the scheduled coating.

“That was a crazy job,” says Covert, adding that he heard the task involved 40 gallons of stripper and three applications. Even after all that, “We still had a lot to remove with the pressure washer but it came up with a good spinner tip and steam.”

The company used Concrete Solutions WB Epoxy Primer as the first coat, followed by an application of Concrete Solutions Spray-Top in Tile Red over the existing European Fan pattern. The borders were finished with a custom color that was slightly darker. To finish the job, they used two coats of Concrete Solutions Acrylic Urethane and a light layer of aluminum oxide was broadcast for slip resistance.

The job began the first day of the year and was completed by 4 p.m. the next day. “We ended up doing the pool deck there two months later,” says Covert. 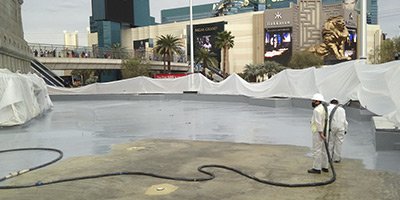 Technology advances expand the range of options for concrete projects Whether the objective is keeping water in — like a pond, tank, pool or reservoir — or keeping it out — such as a foundation or entire building — waterproofing looms large in concrete installations. 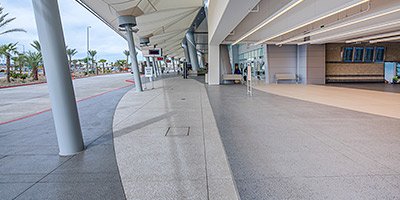 When weary travelers pull or carry their bags across the plaza and into one of the lobbies of the Consolidated Rental Car Center at Lindbergh Field at the airport in San Diego, they probably won’t give much thought to the decorative concrete and terrazzo beneath their feet.