Diversify with Direction When Expanding Your Business 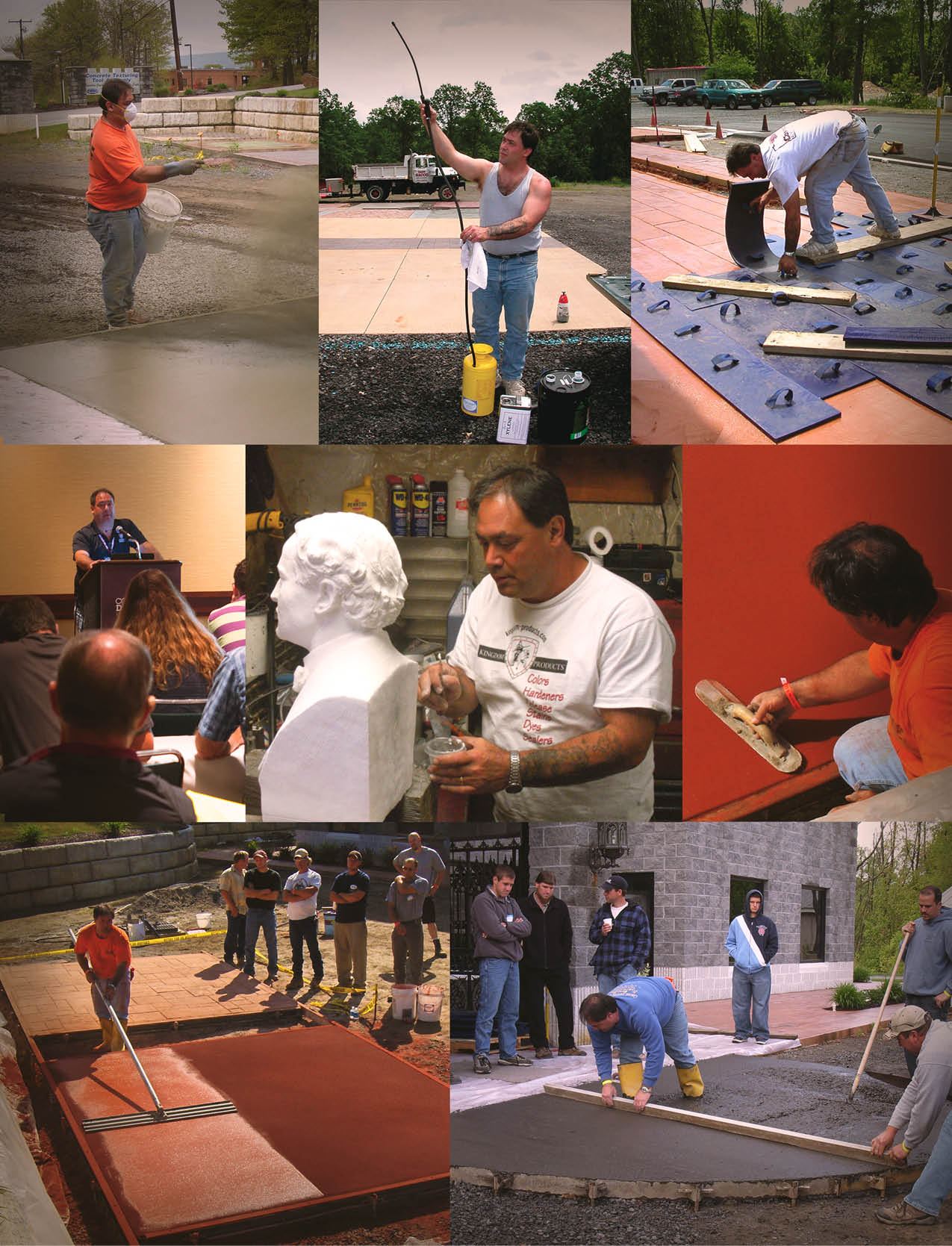 Growing up, most of us think life will simply progress from school to job to retirement. Once we’re in the workforce, though, we realize things aren’t so tidy.

Questions begin to arise. Should I continue to work for someone else when it looks so attractive to be the boss? Clients keep asking for something I don’t offer — should I add it? I never even thought about that aspect of the business — is it a better fit for me?

They’re questions that don’t always have easy answers. Fortunately, plenty of people have headed out in different directions within the concrete industry and found the journey has taken them to a pretty good place.

The glue of education
Bart Sacco, owner of Scranton, Pennsylvania-based Kingdom Products, never thought he’d end up manufacturing and distributing products to the decorative concrete industry when he started working as a concrete contractor almost 40 years ago.

However, what ties his story together is education, both his own and his clients’.

Sacco had a couple of revelations early in his career that helped turn it in a different direction. One is that his body wasn’t up to installing concrete forever. And, he also realized if he was going to support the industry, some of his competitors had to do a better job. That’s when he moved into educating others.

Sacco explains he had grown up in what he calls a “masonry family.” His father had been an ornamental plasterer and he and his brothers helped serve on the crew as his family built out a 68-home subdivision.

“A lot of the work looked terrible or they weren’t doing things right,” he says of his early competitors. “I thought, ‘If you’re going to do the work, do it properly.’ That was my driving motive. I just wanted to teach them and guide them properly so the work would look good in the community.”

“As we moved into distribution, I thought if somebody was going to purchase product from us, they weren’t going to want us competing against them,” he says. So he got out of the contracting end of the business completely and handed off jobs already booked to his better customers.

Sacco might have stopped there, but the 2008 recession and housing bust prompted him to take yet another step. He moved into product manufacturing, and really stepped things up in 2010.

One thing that hasn’t changed: Sacco is still busy educating himself and his staff. Early on, he says, he went just about anywhere a class was offered to gain knowledge on colorization or acid staining. Today his distribution staff is still benefitting from what he’s learned.

“We train our staff according to whatever needs to be done,” he says. “Most of the original data these folks learn are from the start of my business — things like surface preparation and how do to an overlay or clean for a new sealer.”

In the meantime, Sacco says, he’s able to offer his laboratory staff a different perspective because he knows how a product is supposed to feel and what the result should be.

In the end, he says, it all comes down to education and how you overcome your obstacles. “Educate yourself so you don’t have problems,” he says. “Don’t go into anything you don’t understand.”

Concrete-obsessed
That’s advice that Christina Arnall and Jacqui Ortmann certainly echo. Both women got into the concrete industry because while their husbands were doing flatwork, they found their own strengths to expand their solid family businesses.

Arnall, who with her husband, Darin, operates D.C. Custom Construction Inc. in Quincy, Washington, says concrete was always part of the company’s business mix, but it took off after a large client wanted stamped concrete as part of a job.

“Darin was a little apprehensive, but I looked into it and no one around here was doing it,” Arnall says. “I ordered some stamps and the other things we needed, watched some videos online, did a lot of research and thought we could do it.”

The job was a success, and the Arnalls began improving their skills by attending classes and training events. It also left Christina Arnall feeling, as she puts it, “a little concrete-obsessed.” While her husband continued to focus on the general construction side of their business, the downsizing D.C. Custom Construction experienced with the recession allowed her to focus more on decorative concrete.

“We started to offer countertops and I learned to carve concrete,” she says.

As with the early steps the couple took into stamping, Arnall says she’s relied heavily on the industry’s educational opportunities. But, like her first stamping job, she did her first carving work at the request of a large client. She was successful through some telephone coaching and a lot of online tutorials.

After taking the introductory countertop class with Ben Ashby, Arnall says that aspect of the business really took off, too. And, the following year, the couple took Ashby’s advanced countertop class, “and that’s what led to the concrete shower business.”

Today, D.C. Custom Construction does a mix of work. Darin Arnall still does general contractor work, the couple flips houses, and the artistic side of concrete continues to open doors for Christina.

“For instance, we’re remodeling a pool area that we would never have done years ago,” she says. “We’re doing a concrete water slide and water features, which is all done with carving.” The job also includes an outdoor kitchen with concrete countertops, and an outdoor shower with half-inch concrete panels.

Christina Arnall is using those same thin panels to create frameable pieces of art seen here and estimates she does at least two a week. The shower panels, which they sell online, have proven so popular the couple is adding a second facility just to produce them.

“It’s definitely grown our business,” she says. “But it also sets our business apart. That may be the biggest impact. We’re able to offer some things that other contractors can’t and don’t, so even if we don’t get a full job, we’ll get called in to do specialty items as a sub.”

An emphasis on quality
Jacqui Ortmann knows about the importance of setting a business apart from its competitors. She and her husband, Doug, have operated Ortmann Concrete Inc. from the St. Louis suburb of Arnold, Missouri, since 2003, when almost all its work was in new construction flatwork.

In response to the recession, the Ortmanns added stamped concrete to their business mix, in addition to countertops. And to make sure their concrete is properly cared for, they also distribute a line of sealers. 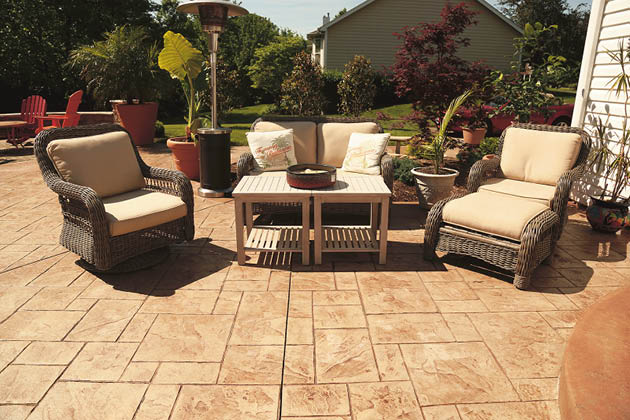 The recession changed that. Without much new construction going on, the couple decided to focus more on quality workmahship and decorative jobs. They started doing more stamped work and added concrete countertops, which Ortmann says were still a novelty in the middle of the country a decade ago.

The company’s concrete countertops are made with its proprietary Bellattex system, a regular concrete mix that incorporates Ben Ashby’s products. “We did some training (with Ben) and received certification in the program and that helped us solve some of the puzzle pieces we didn’t quite have without that next level of engagement,” she says. The name Bellattex, she adds, is derived from a combination of her kids’ names.

Having good answers to their clients’ questions is very important to the Ortmanns, who have translated that into two specialty client niches. They offer consultation contracts with property management and utility companies in their area. And working with the property management firms led them into yet another market: distributing products.

“We were seeing a lot of pitting and popping on driveways, and we wanted to make sure we had a solid answer for our clients to help them protect their investment,” Ortmann says. “We looked at different sealers and fell in love with the SealGreen line of products.”

As with other areas into which they’ve expanded, the Ortmanns did their homework on the company, making sure they were comfortable with them. Now, they educate their property management clients on how best to use the products and offer do-it-yourself videos and classes for homeowners to drive product sales.

One thing that sets the Ortmanns apart from their competitors is an office/showroom, which provides display space for the SealGreen products and a place where they can meet with prospective clients, whether they’re looking for flatwork or a custom countertop.

“We have a shop manager who helps with the SealGreen inventory and has been trained for creating the forms with Bellattex,” says Ortmann. “Right now, we’re looking at adding a line of concrete tabletops in a mix of sizes, shapes and colors, but we’re still trying to figure out how to do the bases. We’re still trying to find that puzzle piece.”

She admits there are also some things, such as installing overlays and epoxies, that the company doesn’t do on a regular basis because “it takes us out of our everyday efficiency.” And, after struggling with railings, the Ortmanns refer that work out to a sub.

She believes Ortmann Concrete has grown because it’s paid close attention to what it’s added and, as she puts it, “made sure they’re things that are producing and adding to the company, and not taking away.”

As for others who might be thinking about diversifying their businesses, Ortmann advises to think beyond simply selling a product or service.

“If you’re looking to provide a solution, that makes a lot more sense,” she says. “And, it needs to be in your wheelhouse. There’s only so much time in a day, so you don’t want to get too far away from what you’re good at. It needs to be a strategic move that leverages your strength. You’ve got to be careful what you take on or you can diversify yourself right out of business.”