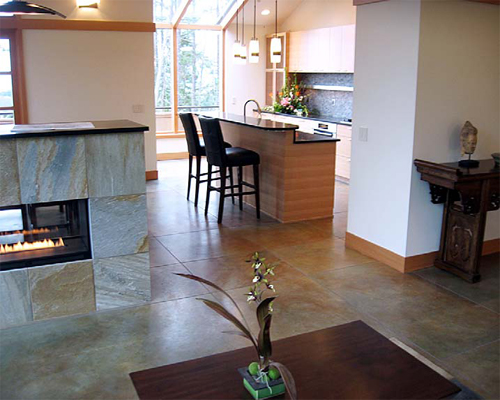 For a greener alternative to acid staining, SoyCrete Architectural Concrete Stain from Eco Safety Products offers the same variegated look in a product that’s environmentally friendly in virtually every sense of the word.

SoyCrete is nonhazardous, LEED-friendly, ultra-low in VOCs and is made using a rapidly renewable resource – soybean plants (as you may have guessed from the product name). SoyCrete is based on soy ester dispersion technology, which Eco Safety Products acquired the license to use four years ago. The technology itself was developed by New Century Coatings president Tom Rauls, who discovered this new application for a soybean byproduct while he was working with the United Soybean Board. The byproduct, soy methyl ester, was being burned as diesel fuel before Rauls put it to better use.

“Soy methyl ester emulsions [are] basically the vegetable-based substitute for motor oil,” says Rauls, and like motor oil, the substance can penetrate porous concrete by as much as 1/8 inch. Rauls says that this technology represents the first vegetable-based alternative to acid and polymer staining.

After licensing the technology, Eco Safety Products built an entire line of sustainable coatings around it called EcoProCote. The line includes SoyCrete as well as a wide array of other soy-based paints, stains and sealers, which it has been supplying to both the green building and the decorative concrete industry for the last several years. In that time, Eco Safety Products has also been working with Rauls to further develop and enhance the technology. Eco Safety Products president John Bennett says that SoyCrete has been extremely well received. “Growth has exceeded triple digits each year since its release,” he says. And little wonder – the technology has a lot to recommend it.

As Bennett explains it, SoyCrete is based on a “soy ester dispersion chemistry designed to deliver a non-film-forming, semitransparent stain effect that is absorbed into the substrate to provide a natural variegated look.”

In addition to a unique aesthetic, SoyCrete also boasts a huge variety of coloring options. While the product is available in 16 premixed standard colors, that’s only the tip of the iceberg. It is also available with field-applied pigment packs for customizing colors, or it can be customized to spec. All SoyCrete pigments incorporate a proprietary bio-based, UV-resistant pigment technology.

This color flexibility was put to the test when SoyCrete was chosen for use in the renovation of the Tovrea Castle in Phoenix, Ariz. “One of the major challenges was to match the original colors used in the [exterior] concrete,” Bennett says. “The unlimited color flexibility of SoyCrete enabled us to do a perfect match of their desired colors.”

Not only does SoyCrete offer a lot in the way of design options, but it’s also very approachable in terms of application. After profiling your substrate and taking the appropriate steps (grinding or etching) to ensure that it’s porous enough to accept the stain, the actual staining process is very straightforward. SoyCrete can be sprayed with either an HVLP or airless system, applied with mops or pads, or broomed with a soft-bristle brush. After applying, it can be ragged, sponged, buffed or even dry-polished to achieve a desired effect. SoyCrete is also designed to be paired with Eco Safety Products’ soy-based penetrating sealer, Acri-Soy, which “leaves a natural finish, with no topical film to change the coefficient of friction,” says Bennett. Other sealers and finishes are also available depending on the desired appearance and protection.

Bennett can also testify to the performance of the technology. One particularly strenuous test of the product came for Bennett when his team had only 12 hours to stain and seal the floors of the Children’s Museum of Phoenix before a party. “To be honest, I didn’t know what to expect, other than letting them know we were doing a temporary install, fully expecting to begin repair the next week,” Bennett says, but “eight months and some 300,000 people later, there are no signs of compromise or deterioration.” Not bad for a 12-hour deadline.

Rauls also stresses that the technology affords a margin of error that conventional stains do not. If you’ve put down your stain and decide that the color isn’t what you were going for, all you need is soap, water and a scrub brush to pull it back out of the concrete, within about 6 hours of putting the product down, says Rauls. After that, of course, the stain is pretty well permanent due to the depth of penetration.

Also thanks to the depth of penetration, surfaces stained with SoyCrete are much easier to repair, says Rauls. If you wear the topcoat down, you can repair high-traffic areas by just grinding down and resealing, he says. With such a laundry list of features, it’s no wonder SoyCrete has found a foothold in the industry, something Rauls says is long overdue: “This technology is what the industry has been looking for now for the last 15 to 20 years.” 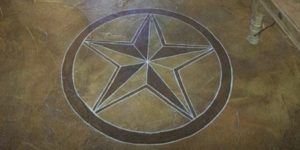 How to Correct Acid Stain Colors on Concrete 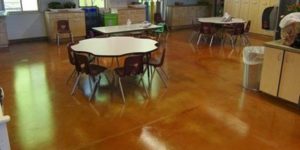 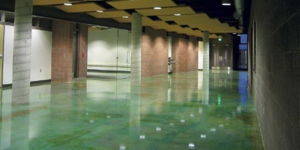