T.B. Penick & Sons is accustomed to getting its way.

When taking on pervious paving contracts, the San Diego-based contractor’s mix design is typically accepted by clients following mock-up, as custom blends can significantly increase a project’s difficulty. Yet, there are always exceptions, with the most recent being the California Department of Transportation (Caltrans).

In the city of Chula Vista, just south of San Diego, a Direct Access Ramp at East Palomar Street is part of a $1.1 billion effort to create a modern new transportation backbone for San Diego’s South County. It offers carpoolers and transit a convenient way to enter the Express Lanes on I-805 and access the East Palomar Transit Station.

As part of the DAR project, T.B. Penick was tasked by the state agency to install more than 130,000 square feet of pervious concrete at a new, 345-space park and ride, a large job but nothing new to the company. The catch: Caltrans requested the pervious blend incorporate 50 percent fly ash, a byproduct of coal. Coping with the blend
“The mix design had never been used before,” says Frank Klemaske, executive vice president at T.B. Penick. This factoid was discovered halfway through a 400-square-foot mock-up, when the contractor questioned Caltrans about the mix’s previous applications.

Following mock-up, T.B. Penick convinced Caltrans to lower its fly ash incorporation threshold to 40 percent. This high volume of byproduct substantially increased the difficulty of what was a relatively standard paving job.

“We’ve done tons of pervious concrete going back 10 years. Our biggest challenge was there was no (mix) consistency from truck to truck,” Klemaske says.

One day the contractor could receive three “good” trucks from a ready mix supplier followed by a truck with a dryer mix that if blended onsite with water could ruin the batch.

“When you’re trying to pour 4,000 square feet a day and you’re not getting consistency it’s challenging,” he laments, adding trucks occasionally had to be sent back. “Most ready mix suppliers dislike pervious concrete because it’s not part of the normal flow of the plants.”

Accessibility was a challenge
Another challenging aspect of the installation was accessibility. Both parking lots featured 4-foot-thick, 1.5-inch aggregate storm water storage beds, which made it difficult for ready mix trucks to drive over without getting stuck. “Once you put down 5 feet of stone, it’s not something you want to be driving on,” Klemaske says.

Plus, because of twists and turns in the drive aisles, trucks couldn’t get to certain parts of the lots. Subsequently, the contractor used a Telebelt, a telescopic belt conveyor system with a 220-foot reach, to complete half of the job.

While challenging, the contractor placed a total of 3,259 cubic yards of pervious concrete in 28 days, according to Marla Devoe, Caltrans resident engineer for the project.

At parking lot one, the average pour was 103 cubic yards per day. Progress at the second area was 96.5 cubic yards per day. Both lots feature a structural section consisting of 0.67 feet of pervious concrete on top of a 1.5- to 3-foot-thick layer of Class 4 aggregate rock. Man-powered rollers and pneumatic roller screens were used throughout installation. A decorative side
In contrast to incorporating a never-before-used mix, T.B. Penick also worked with a familiar paving system during the project.

“The enhanced Lithocrete paving was used to delineate a pedestrian and bike pathway that connects through the project to community features such as schools, parks and the YMCA, and will feature scale lighting and street furniture,” says Jason Avila, executive marketing assistant for T.B. Penick.

An influential project
The effectiveness of the fly ash-heavy pervious mix currently can’t be evaluated, as the park and ride has yet to open to the public. “You’re not going to see any performance until you start trafficking it,” Klemaske says.

Once open, Caltrans will monitor the surface intensely, as mandates call for the use of fly ash-heavy pervious concrete at all large parking lot projects statewide moving forward. Abiding by this mandate may be trying, as Southern California is currently in the midst of a fly ash shortage. How to Make Pervious Concrete Decorative 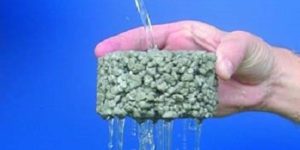