Concrete contractor Kimberley Robles credits Concrete Decor back in the early 2000s for developing her interests in decorative concrete. Back then, she was a journeyman cement mason and the magazine was just getting its legs.

“That’s how I found out about all these cool products and how people used them,” says Robles, who now owns her own company. “It influenced the direction I took.”

She found reading about some of the industry’s most prominent figures — such as Tom Ralston, Buddy Rhodes and FuTung Cheng — inspirational. Their creations and discoveries pushed her to want to learn more.

Robles began working in construction in 1985. By 1990, she was a cement mason apprentice and became a union-trained journeyman. In that capacity, she did flatwork for Landavazo Brothers in Hayward, California. That gig lasted about 10 years, until she developed carpal tunnel in her wrist. Subsequently, she went to school to become a project manager and estimator for Turnkey Construction Management.

After a stint as an estimator with Swinerton Builders, Robles worked for Treasure Island Job Corps in San Francisco. There she served as a project manager for all the trades including cement masons, carpenters, electricians and painters. She oversaw their budgets and managed project approvals.

Following her time with Job Corps, Robles wanted to try her hand as a general contractor. So, she worked under a friend’s license doing jobs for 10+ years. Then All Star Rents company hired her to head its concrete polishing division.

She worked in that capacity for a year and a half. During that time, she attended the World of Concrete twice, working at SuperAbrasive’s booth. Robles also attended the 2017 Concrete Decor Show in Florida.

Learning from the best

At the Concrete Decor Show, she further honed her overlay skills during an Ardex overlay workshop led by Adrian Henry. She also met and learned a lot from others at the show, such as Troy Lemon.

“What I learned at the show was that concrete artisans weren’t afraid to share their skills, tips and tricks in decorative concrete,” Robles says. Back in the day before the invention of YouTube, many kept their acquired knowledge as guarded secrets.

Her biggest challenge in business, she says, was finding a direction she wanted to go in. Her time spent as a general contractor taught her that she needed to find her focus. “I needed to find that one thing I was good at,” she says.

Reading about the decorative concrete projects in Concrete Decor whet her appetite to learn more. She had a friend with a ready-mix truck and subsequently tried her hand at stamping and acid staining. But it soon dawned on her that polishing concrete was her forte.

Time to move on

She says she “tooled up” and purchased her polishing equipment while she was still working for All Star. She bought some pieces from an old customer and others from a customer who had gone out of business. “I networked and hustled for the stuff I needed,” she says, often buying equipment she had previously sold. These included three Lavina grinders and a vacuum.

She learned everything about polished concrete that she could from her day job. And with no real growth opportunity there, Robles took a leap of faith. In 2018, she founded Robles Concrete Design in San Francisco.

“The first job I did was for a customer I had while working the rental job,” Robles says. “I earned more off that first job than I had in three months. Polishing is hard work but it pays off.”

A star is born

When the coronavirus hit the U.S., Robles secured a no-interest loan designed for small, minority-owned and/women-owned businesses. As luck would have it, she had a check in all three boxes. Then somewhere along the line, she doesn’t know how, Citibank discovered her business and background. The bank wanted her to be in one of its commercials.

“I had a trailer, a hair person and a personal assistant following me around,” Robles says. “It took 10 hours to make a 30-second ad.”

She arrived for the shoot dressed as she normally would for an outdoor job. But working under those lights was really hot, she says. So she had to shed layers of clothing as the day wore on.

And she had to repeat working scenes again and again to “get that one shot,” she recalls. “I must have picked up 25 buckets” of what was supposed to be epoxy. “It looked more like laundry soap.”

But in the long run, she concedes, it was worth it. “I got a lot of exposure,” Robles says, and received emails from across the country from friends and colleagues. Plus, she got paid for her 15 minutes of fame.

Robles says she loves what she does and is glad she found her niche. For those folks looking to break into the concrete industry, she suggests you go through an apprenticeship program. Or, if you’re lucky, find someone who knows a lot and is willing to train you. In addition, attend conferences and shows when you can.

Because overall, “Knowledge is power,” she stresses.

She has been certified by an impressive list of companies, including Ardex, Ameripolish, Prosoco and Superabrasive. “I take all the certification classes that I can when I go to WOC,” Robles says. She is also a member of the American Society of Concrete Contractors Concrete Polishing Council.

“Keep an open mind because there’s always something to learn. People are always coming up with different ways to do something,” Robles says. And sources, such as Concrete Decor, she notes, can help keep you abreast of products, training, changes and improvements in the realm of decorative concrete. 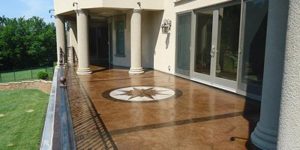 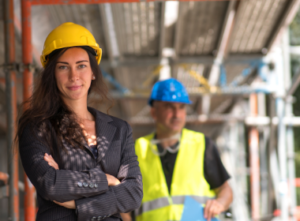 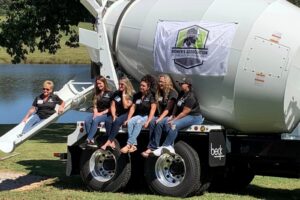 For concrete professionals:
Women band together to
promote concrete industry