The interest for decorative concrete is reaching new heights all over the world, and with this comes a need for education and training. Many countries are looking to the United States for products, information and support.

Over the past few years there have been training and educational events in countries such as England, France, Italy, Greece, Lithuania and Georgia.

As part of the search for training and education, these countries have been host to some of the most respected industry leaders in the decorative concrete business. Join me as we take a trip around the world to see what is happening with decorative concrete.

Great Britain
Great Britain is one of the veteran countries when it comes to stamped concrete. However, the country has been slow to pick up on new technology within the decorative concrete industry.

Recently, Mike and Rebecca Green moved from the U.S. to England. Having worked in decorative concrete in the U.S., they saw a gap in the market for their applications and techniques.

Not being able to find the right products or the type of quality they were used to, they decided to start importing materials from the States. It was at this point that Greencrete was formed as a specialty supplier to the decorative concrete market in the U.K.

With these new product lines came a need for training. Greencrete is a supplier for Speciality Concrete Products. In July 2008, SCP sent technical director Marshal Hoskins to the south of England to assist in a training event and demonstration for the U.K. market. The three-day training covered stamped overlays, acid stains, concrete countertops and vertical texturing systems. Reportedly, attendees were impressed with the knowledge and experience that Hoskins provided during the training course.

France
France was invaded by decorative concrete when Disney chose Paris as the European city where it would open a theme park in 1992. Mike Archambault, former president of Patterned Concrete Industries Ltd., was instrumental in the design and construction for all the flatwork at Disneyland Resort Paris. Mike became so attached to the European way of life, he chose to leave the U.S. and stay in France to develop decorative concrete even further.

Bob Harris and Mike hosted their first DCI France training in December 2007. This event covered microtoppings, stamped overlays, vertical stamping, polished concrete, acid stains and dyes. More than 35 attendees at the four-day class found a lot to see and learn. Georgia Burji Limited is one of the largest construction companies in

Georgia, a small sovereign country that borders Russia. When Burji Limited decided they wanted to start out in the decorative concrete business, they also looked to the United States for training and education. After many hours scanning the Internet and trying to qualify the companies they were talking with, they came across Decorative Concrete Resources and trainer Todd Scharich.

Scharich was invited to come from the U.S. to present material and train employees in the basics of decorative concrete applications. Stamped concrete was the main focus of the training, starting at the very beginning with concrete basics and mix design and proceeding to placement and finishing techniques.

Starting from the beginning is the most important aspect of training in a country that has a weak understanding of concrete and concrete placement. Working from the ground up is the only way to go — people need to understand and master the basics before they attempt the high-end decorative work. This has been where other companies have gotten it wrong in the past.

Todd Scharich is used to the trials and tribulations of decorative concrete in the U.S., but during his visit to Georgia the political pressure between Georgia and Russia came to an all-time high. Within a few days of Todd leaving Georgia, the Russian army invaded Georgia, a crisis that lasted for 12 days.

Greece
We should all recognize that the Greeks were at the very beginning of architectural concrete, with work dating back to 4,000 B.C.

Events like this are unusual but important to the growth of the industry. Most companies focus on contractor training, but designers and architects need to understand the potential of decorative concrete to enable them to specify our systems.

Decorative concrete has been widely specified throughout many of the Greek Islands and mainland Greece, and the market continues to grow.

Italy
The Italians are no strangers to hosting international events that draw huge crowds. Ideal Work, my company, is pushing the boundaries and developing new products all the time. In July 2008 Ideal Work held two international conferences at its 3,000-square-foot training facility in Veneto, a town in northern Italy. The conferences showcased its new systems for stamped overlays, microtoppings and decorative epoxies.

I conducted the international conference. At the two events, there were more than 30 contracting companies, eight Ideal Work distributors and four architects that attended, totaling more than 90 people.

We invite guest speakers and trainers to host events throughout the year. Bob Harris of DCI, Clark Branum of Scofield, Trevor Foster of Miracote and Bent Mikkelsen of Concrete Decor have all presented at the facility, offering their knowledge and experience.

Lithuania
One of the Baltic states, Lithuania is home to a small company with huge talent called Art Projects that has taken vertical stamping and texturing to unprecedented heights. The company’s three founders are well-known in the world of sculpture and they wanted to show the rest of the country what they had been working with.

Art Projects invited me to join them in March 2008 to host a seminar with a demonstration for more than 40 artists, designers, architects and contractors. What was intended to be a three-hour seminar actually ended after eight hours. There was so much interest in the possibilities of decorative concrete that Art Projects is going to hold more training events around Europe to help spread the word about vertical stamping.

When using EU funds, one of the provisions is to use proven construction practices and systems. This is where decorative concrete comes into play: in roads, tramways, hotels, shopping malls and housing developments.

Training and education are ensuring that decorative concrete is considered a quality construction practice that has and will continue to stand the test of time. In the long run, decorative concrete may become the paving system of choice across the whole of Europe. 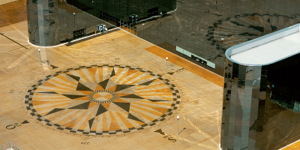 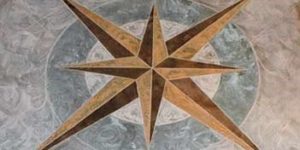 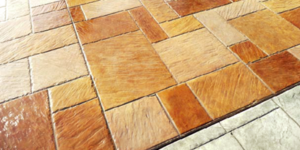