According to an August 30, 2009, article in the New York Times, the United States Green Building Council’s own research suggests that a quarter of new buildings that have been certified in the Leadership in Energy and Environmental Design (LEED) program do not save as much energy as their designs predicted, and on top of that, most do not track ongoing energy consumption. These are disappointing findings and don’t generate a lot of confidence among the public in so-called sustainable buildings.

So how would a building that is not energy-efficient become LEED-certified? Most LEED points are not based on a building’s actual performance but rather on measurements such as percentage of recycled content or the distances traveled by products after manufacturing. What’s needed, and LEED is moving in this direction with its Building Performance Initiative, is to incorporate into a building’s rating some form of life-cycle assessment (LCA).

Life-cycle assessment is a simple concept that in practice rapidly becomes complex. Start by calculating how much energy is used or how much pollution is generated by a single product during its entire life, from raw-material extraction to manufacturing to construction to operation to final disposal or recycling. Do this with all of the products used in a building, including the energy used to operate the building, and you have the environmental life-cycle assessment of the building. Generating this information for different buildings allows us to fairly compare the environmental impact of different types of construction and different products.

Concrete has a long life. There is Roman concrete still performing well after 2,000 years. That fact alone gives buildings with lots of concrete a favorable life-cycle assessment, since the manufacturing impacts can be spread out over that very long life span. Remember that the most sustainable building of all is the one that is never built. So one energy-efficient concrete building that lasts for 100 years easily beats two 50-year-life wood structures. And concrete in buildings also gets to take credit for having low maintenance costs, having no toxic off-gassing, and for acting as a heat sink (thermal mass) to modulate heating and cooling requirements. We’ve got it made, right?

What is life-cycle assessment?
Of course, nothing’s ever quite that simple. To start with, what is it we are actually measuring? There are a variety of environmental impacts that are often included in an LCA. How much energy is used during the entire life cycle? How much carbon dioxide is released? How much water is used? How much toxic material is released? And, of course, how much will it cost? We’ll get back to cost in a minute, because that’s actually a different approach – a life-cycle cost analysis.

Some LCAs focus on a single impact, such as carbon dioxide equivalents. Others provide a variety of scores for each of the different impacts. An LCA tool developed by the Athena Institute for use with the Green Globes rating system allows comparison of five environmental indicators: energy used, global warming potential, toxic releases to air, toxic releases to water, and solid waste. Rather than trying to weigh each of these and combine them into a single score, calculating each separately allows more direct comparisons of alternative products and buildings.

Critical to conducting an LCA is the data. That data comes in the form of a life-cycle inventory (LCI), which shows the environmental impacts for each individual component of the building – say one pound of cement or one gallon of sealer. Getting good LCIs is difficult and often subjective. If the data are biased, the results will be biased. To address that, the National Renewable Energy Laboratory and its partners have developed the U.S. LCI Database to provide data that it can claim is consistent, accurate and relevant.

So all of these LCIs are added up and you arrive at the life-cycle impact of the building. But, according to the U.S. Department of Energy, building operations use about 40 percent of the energy consumed in the United States. The energy used and pollution generated during construction are dwarfed by what happens over the building’s lifetime, and many LCAs have not accounted for this.

The Massachusetts Institute of Technology’s Concrete Sustainability Hub has set out to change that and has develop an LCA model that focuses on the use and demolition phases of the building’s life. Teams of researchers at the Concrete Sustainability Hub have analyzed both residential and commercial buildings with an anticipated life of 75 years. They have also looked at regional differences by running LCAs in Chicago and Phoenix. This research has shown that more than 90 percent of a building’s environmental impact is due to its operating phase and that concrete structures can reduce the release of carbon equivalents by as much as 20 percent. This work is ongoing and will be used to test the design alternatives and to show that concrete buildings reduce carbon emissions compared to alternative construction materials, too.

Life-cycle cost analysis
A life-cycle cost analysis (LCC) is actually a little simpler, since the costs are more evident and concrete (if you’ll excuse the pun) than something like how many people will get cancer from a given toxic release. An LCC is different than a traditional cost analysis in that it includes not only the initial cost and revenue generated by a building but also the cost to operate and maintain the building over its lifetime, and it considers any salvage value when the building’s useful life ends.

An LCC allows a building owner to compare various surface finishes, for example. How much does it cost to operate and maintain a concrete floor instead of a carpeted floor, and what are the replacement costs? A good tool for comparing different energy-saving investments is the Cash Flow Opportunity Calculator from Energy Star. Another analysis tool is the Building Life-Cycle Cost (BLCC) software from the National Institute for Standards and Technology.

But not all economic impacts are quite as obvious on the balance sheet. “Life Cycle Cost Analysis Of Occupant Well-Being And Productivity In LEED Offices,” a 2009 study conducted at Michigan State University, analyzed the indoor environmental quality of a LEED-accredited office building compared to a more traditional office building. Considering asthma and respiratory allergies, depression, stress and productivity, they documented significant improvements in LEED offices. In productivity alone, this study showed that the average building occupant was about 2 percent more productive, resulting in nearly 40 more hours of productive work per year. Happy and healthy employees may be a goal for many reasons but it can also pay off at the bottom line.

An LCA for environmental impact and an LCC for economic impact make great sense. As LCA and LCC become more standard tools in determining how sustainable a building is, concrete’s many attributes will become more and more the material of choice. 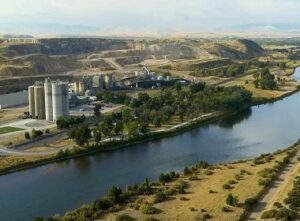 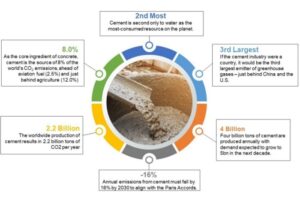 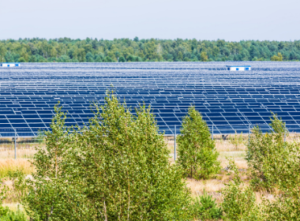 LafargeHolcim in the US Harnesses Solar Energy at Hagerstown Plant