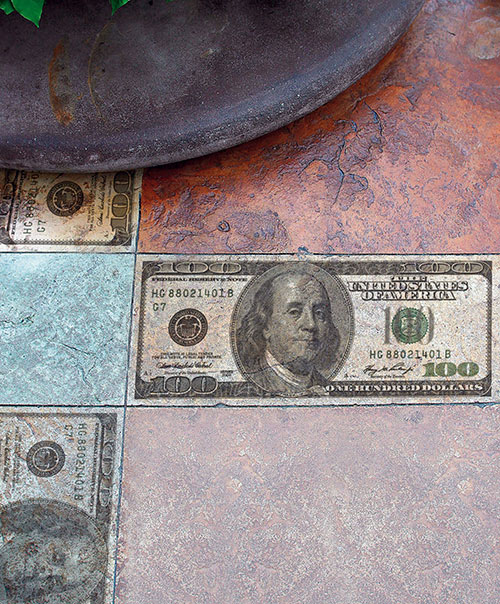 Concrete Decor contacted a few successful artisans to ask how they market their services in their respective communities. Besides being adamant about promptly delivering a quality product and maintaining a good relationship with past clients, many of them say the key is finding inventive ways to let their potential customers know they’re out there. 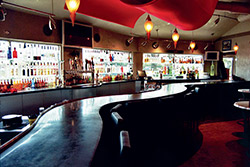 Network
Elizabeth Maurer, owner and designer for Liquid Stone Concrete Designs LLC in Bucks County, Pa., encourages contractors to “press the flesh” at free events whenever they get the chance. She coerced her reluctant husband into going with her to a local chamber of commerce open house where members and nonmembers were welcome. It paid off.

“They had a card exchange at a really nice hotel,” she says. “Gerry met a designer who had been in our showroom but he hadn’t spoken to him. Before you know it, he was telling Gerry about five different jobs he had going.” 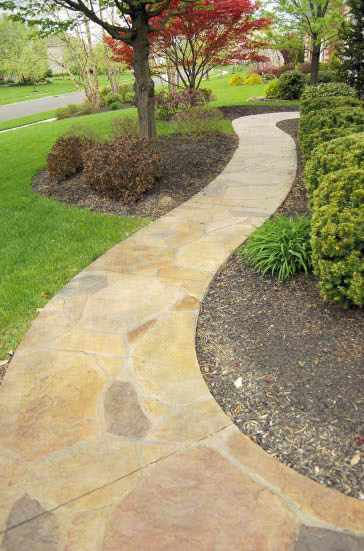 These types of meetings allow people to put a face with a name, she says, and they’re great venues for possible business. “Don’t be afraid to sell yourself, or they won’t know what you do,” she advises. “You have to be confident. If you’re not comfortable walking up to people and shaking their hands, take a public speaking class.”

Along with chamber events, attend meetings hosted by local affiliates of organizations such as the National Association of the Remodeling Industry, the National Association of Home Builders and the U.S. Green Building Council. They’ll try to recruit you, Maurer says, but you can attend a few meetings before you have to commit to anything. They can be great networking resources if you get in with the right bunch.

Also, Lee Levig, owner of Concrete Works in Fairfield, Calif., suggests forming a tight-knit “exchange group” in which tradesmen refer each other for jobs. His group, he says, consists of a tile layer, a framer, a drywall plasterer, a painter, a stucco applicator and a general contractor. “We’ve developed a good working network, but the referral just puts you in line. You still have to bid.”

Play the green card
To get decorative concrete in front of the environmentally aware, Elizabeth Maurer of Liquid Stone belongs to the Delaware Valley Green Build Council, a USGBC subsidiary, and the Green Collaboration, a Pennsylvania grassroots association made up of environmentally friendly small businesses. “Concrete is green,” she says, “and you should take advantage of that. A lot of people are willing to spend the extra money to go green.”

Green Collaboration members, she says, have banded together and printed discount cards accepted at member businesses. “The cards cost us $5 apiece and we give them to really good clients,” Maurer says. Offers range from “buy a countertop and get a free sink” to “get 50 percent off your first housecleaning.” 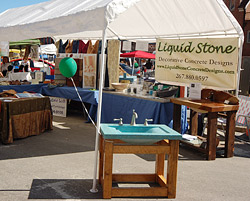 When Maurer hosts open houses at Liquid Stone’s design center, liquor and food are a must. She cut corners for one by joining forces with a Green Collaboration member with an organic food business that supplied all the hors d’oeuvres.

As for attending trade shows, Maurer has narrowed her scope to small, environmentally oriented regional ones, where she gets the most from her investment. “When you’re doing a show, always go for a corner spot,” she advises. “You get two access points and you can spread out a bit. Be sure to make the exhibit three-dimensional and interactive. Give them stuff to touch.”

However, in keeping with the green focus of these shows, the company has done away with the bulk of its printed literature and instead hands out rack cards with their name and address. “People don’t want to lug around big bags at trade shows.”

Look professional
Cathye Rankin, director of marketing and sales for GLC3 Concrete and Couture Concrete Systems in Plantation, Fla., believes companies that want to succeed in today’s competitive market should always present their best face in public. “Image is everything,” she says. 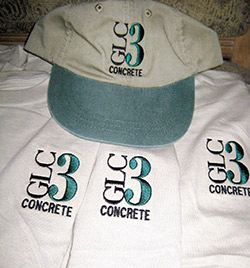 GLC3 crews wear clean, embroidered T-shirts on job sites. “People notice a clean work crew. If you’re a little classier than the guy behind you, people notice. That’s why I’m pretty particular on how my guys look when they show up for a job.”

Rankin — whose husband, George Lacker, founded GLC3 in 1999 — is also steadfast about taking professional, good-looking pictures of completed work. “If you have good ‘after’ pictures, complete with a fully decorated room, you’ll get published more often. That’s why I’ll spend the money and send a photographer out to take pictures. I mean, would you rather show potential customers pictures taken with a cell phone or ones that make them say, ‘Wow! That could be in a magazine.’ Perception is 90 percent of what they buying into.”

Michael Littlefield, owner of Custom Concrete Design in North Berwick, Maine, since 1996, is also a proponent of professional photography. “Sometimes we just need to focus on what we’re good at and let a professional handle our photography. Though it can be a bit of an investment, when concrete is captured effectively it helps sell the product.”

Besides the obvious marketing materials of business cards, direct mailers and a brochure, Littlefield thinks one of his most valuable marketing assets has been his trucks and trailers. “Though we currently only have two trucks on the road, we’ve taken full advantage of our mobile billboards,” he says. “Between the vibrant colors and the consistent messaging, we’re reaching an audience that likely would not have found us otherwise.” 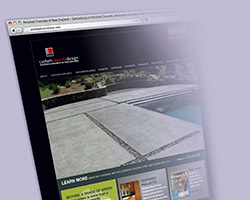 Launch a website
A good website is a must when it comes to building brand recognition and reputation, Rankin says. “Nobody picks up the Yellow Pages these days,” she says. You need to invest in a website to get your name out there. “You’ll get your money back out of it if you do it right.”

Littlefield also banks on the Internet. “Our website is our primary platform for marketing and showcasing our work,” he says of his company site, PolishedConcreteNE.com. “We’ve recently pulled all magazine and phone book ads as the majority of our target audience is either finding us online, through referrals and word of mouth or on our mobile signage.”

His company has put considerable effort into improving its website content by incorporating keywords, meta tags and descriptions that relate to its services so it gets better search engine rankings. “We’ve included search phrases our audience is likely to use when searching for polished concrete, green flooring solutions, that type of thing,” he says. 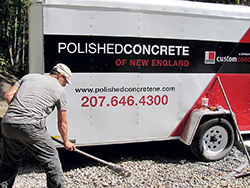 Expand
Lee Levig of Concrete Works is a holdout, as far as websites go. He says he hasn’t had the need to create one yet — “I guess I’ve been lucky.” But he has had to change his company’s business model to survive.

“I have a repair and maintenance crew now,” says the man who used to make his bread and butter off one-of-a-kind high-end residential projects. “We also do pavers and overlays, and we travel a lot farther than we used to. We do a lot of little jobs I wouldn’t have taken on five years ago.”

Instead of playing in the mud, Levig now finds he spends a lot of time on his laptop communicating with customers. “I’ve changed from being an artisan to becoming a manager,” he says. “I don’t get my hands as dirty as I used to.”

Levig also likes to do conceptual drawing for larger projects. “And that’s huge. People are willing to pay a little extra for things like that.” 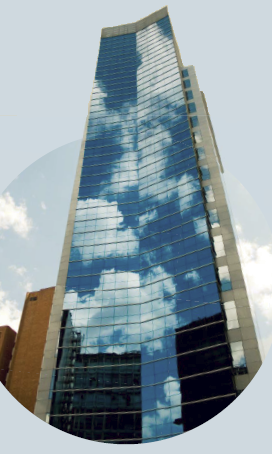 Lee Levig suggests that contractors looking for new customers should seek out companies that manage rental homes or commercial properties. “You need to find them and go after them, but don’t expect to retire on that money,” he says. “It’s only one part of my business model. Right now, it generates me an income because repairs are a continual thing.”

He says he cold-called one such company four or five times before he finally was hired to do a little patchwork. “The first few they made me bid on,” he remembers. “I had to come out and bid on a $200 repair.” But after about six to eight months of delivering good, consistent work on time, the company now regularly calls him for any job they have that relates to concrete repair. To help gauge the cost, Levig has a price sheet for repairs based on square footage.

“These repairs are problems for the companies, too,” he says. “They don’t want to go through an elaborate process to get things fixed. They’re just looking for that guy who will make their job easier.” 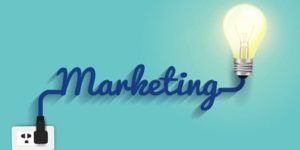 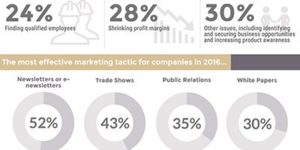 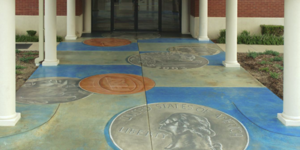