As with everything, there are trade-offs to using polyaspartics. Understand­ing how they work in different temperatures and varying amounts of humidity is part of the challenge. However, industry suppliers happily provide information on their products and the train­ing necessary for contractors to deliver at the speed these can require.

Still there are workarounds, and changes to their formulations mean it doesn’t always have to be 100 mph to the door. And, in exchange for those fast set-times, not only can jobs be completed much more quickly than with other coatings, but the finished product is a thick, durable coat that’s UV-resistant.

While some concrete contractors may still not be familiar with polyaspartics, they’ve had a place on flooring since the 1990s.

Steven Reinstadtler, infrastructure marketing manager for Pittsburgh-based Covestro LLC in Pennsylvania, notes Covestro developed the first polyaspartic coating resins in the 1980s, but they weren’t for the concrete industry.

“There was an unmet need in the protective and marine market segment,” he explains. “Asset owners and engineers were looking for a faster-curing, higher-film-build coating for those markets, primarily bridges. What they really wanted was something faster curing which could reduce the downtime and detour costs. Plus, with a higher film-build, in many cases you could eliminate a coat.”

It took the realization that polyaspartic coatings would work in a host of other areas that really opened the market for the product. Although Covestro held a patent on the resins, other formulators could use the formulations and resin raw materials. Starting in the 1990s, several dozen other coating manufacturers offered a formulated polyaspartic coating, as well.

While the combination of polyaspartic resins and aliphatic hardeners isn’t that much different from polyurethane coatings in terms of durability, what sets them apart are the same things Covestro initially sought with its bridge coatings.

“It’s fast-cure technology,” says Jeff Bonkiewicz, a channel manager with Bethany, Connecticut-based Laticrete International. “Within our product category of floorings, the cure times range from about an hour-and-a-half to two-and-a-half hours, depending on conditions.”

Polyaspartics as a solution

For that reason alone, it’s under­standable that polyaspartics can be very attractive in certain situations.

“I recommend it for jobs that have narrow windows of application,” says Glenn “Buster” Osteen, technical director for McKinnon Materials in Tampa, Florida. “Say you have a facility that’s going to close at 7 o’clock in the evening, and you’re expected to strip the floor of the coating that’s on there now, prep the floor, reinstall an entire floor system and let people back on it by 7 the next morning.”

A good example is a current job by Seman Flooring of Washington, Pennsylvania. Company owner Bob Seman says he’s been using polyaspartics for about 10 years. He found the product to be a must when he was hired to do a linen room at UPMC Magee-Women’s Hospital in Pittsburgh.

“They were looking for both a low-odor product and a fast-drying one,” he says. “The linen room is so busy that it needed to be done in three phases.” During one of these phases, “We were able to start work at 7 p.m. and at 6 the next day they were moving linens through the hospital.”

A host of formulations

That polyaspartics can be low odor makes them doubly attractive in situations such as Seman’s hospital project and another one the company completed at Nemacolin Woodlands Resort in Farmington, Pennsyl­vania. In general, the amount of solids-to-solvents in a product determines how much odor it will emit. This is a boon in occupied buildings and in states such as California where VOCs are closely monitored.

“Those products with more solvents added have a strong odor to them, but over the last three to four years we’ve been implementing products with extremely low odor,” says Jimmy McGhee, technical director of Versatile in Anaheim, California. “We didn’t have the technology to do that even five years ago, but we’re switching to low-odor formulations, and our products are accepted across the country.”

Depending on the percentage of solids in the formulation, polyaspartics can also offer a very thick product, McGhee says. The result is something that’s high gloss, easy to keep clean and chemical-resistant. It also offers UV-stability that other products don’t provide.

With those attributes it’s hard to think why everyone wouldn’t fall in love with polyaspartics. However, if they have a drawback, it’s that they can be tricky to work with. Covestro’s Reinstadtler says even an experienced contractor without specific experience using polyaspartics is likely to stumble.

The reason: they can be catalyzed by humidity or moisture, whether it’s moisture in the slab or humidity in the air. In either case, it can shorten the working time.

“Say they’re living in Houston and they start using polyaspar­tics in the wintertime,” he postulates. “Everything is great, and they’ve got a nice, long working time. But then they go to use it in August, and that working time of 30 or 40 minutes is suddenly only 20.”

Flooring in Billings, Montana, relates to the situation from early in his career working with polyaspartics. After doing several cold-weather jobs, the weather warmed up.

“It was the biggest learning curve of my life,” he says laughing. “When you lose a couple thousand dollars in product it’s an eye-opener.”

However, weather isn’t the only determining factor in how a product will work.

“There are different formulations within the polyaspartic category,” says Laticrete’s Bonkiewicz. “It depends on the number of solids your polyaspartic has. The lower it is in solids, the easier it is to work with. We manufacturers are constantly tweaking the formula to get a better formulation that’s going to be more contractor friendly. We also want to offer better performance.”

Because it’s not going to apply the same, depending on the product and conditions, McKinnon’s Osteen says, “You have to have your technique for application spot on.”

It’s also the biggest reason manu­fac­turers urge contractors to get training on polyaspartics. They want contractors to understand them and become comfortable with their application before taking a job. It’s a recommendation Angel seconds.

“We’ll ask them to come to our training sessions, which we hold monthly,” says Versatile’s McGhee. “We want to show them hands-on how to apply these products. We do this because we don’t want them having limited experience and then running into trouble.”

Bonkiewicz agrees that in-person training is the best way to become acquainted with polyaspartics. He also suggests taking a class in moisture remediation, which can also be an issue.

“And, it’s also important for contractors to get to know their technical sales representatives,” he adds. “They’re going to be able to provide good field support and expertise. If something goes wrong on the job, they have someone they can rely on for help.”

While training on using the products is key, when it comes to prep, the tech­niques are familiar. Generally, the prep for applying polyaspartics is similar the process for other floor coatings.

Buck Collins, owner of Collins Concrete Coatings in Ashburn, Virginia, says his company prepares for the installation of polyaspartic resins starting with a diamond grind of the substrate.

“After that, we repair any spalls or spider cracks. We use a product that fully cures at 70 degrees in about 15 min­utes,” he says. “We also grind that material. After cleaning and vacuuming the floor, we’re ready to coat.”

“We require a concrete surface profile or CSP of 2 for our polyaspartics,” echoes Laticrete’s Bonkiewicz. “We also prefer they do a moisture test before they put down any materials. Generally, we find the two largest reasons for product failure or job failure are improper surface prep or moisture issues.”

One recent development in polyaspartics that has been made by changes in formulations is the development of a matte finish for customers who don’t necessarily want a high-gloss floor. Versatile was first-to-the-market with what McGhee calls a “deglossed surface.”

“We’ve been trying to come up with a matte finish because there are a lot of jobs out there where the customers don’t like high gloss,” he says. “There really wasn’t an option out there except with water-based products, but the water-based don’t last as long.”

So, where are polyaspartics going? These fast-setting polyaspartics are gaining favor and some contractors are already extending their use as a topcoat over a flexible thicker aromatic water­proofing coating in exterior applications where concrete has movement, such as balconies, terraces and concrete decks.

New developments also allow formulators to make flexible, 100% solids polyaspartic coatings that can be a waterproofing layer and a weather-stable topcoat all in one.

In the future, some manufacturers see the demand for them equaling that of urethanes. And, more moisture mitigation materials and more formulations that produce a matte finish are already on the horizon.

As for contractors already using polyaspartics, they believe they’re here to stay. And, while Seman says longer working times would top his list of possible improvements for the product, he adds, “It’s easy to like the idea of applying a coat, and an hour later you’re applying the next coat. But those are the jobs where you need to have the extra guys and the more-experienced ones. You have to be careful and cautious and not let the product get ahead of you.”

For those new to the product, Angel offers the advice he wished he’d taken early on using polyaspartics and gotten some knowledgeable help from the get-go.

“If somebody goes and buys some and it sets up too fast and they have to redo the project. Then they’ll bad-mouth it and say it’s the worst thing,” he says. “You have to understand you need to ask for help.” 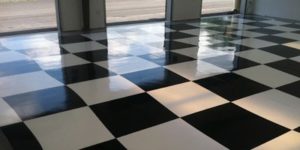 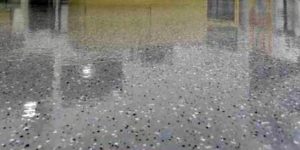 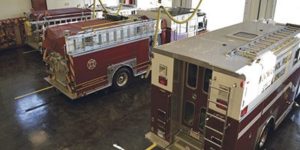