A great deal of Scott Harrison’s work involves large facilities, so he understands the importance of being able to do a lot in a limited amount of time. In many of his jobs, the manager of BN’A Construction in Frasier’s Bottom, West Virginia, must figure out a way to apply a new floor coating while a plant is largely still up and running.

He credits Matt Walker, a sales technician with Niagara Machine, for bringing DiamaPro UV-HS, an ultraviolet-cured coating designed specifically for concrete floors, to his attention. For quick turn-around jobs, he says, “It’s almost impossible to use anything except something like this.”

The Niagara coating cures instantaneously when exposed to the proper amount and strength of ultraviolet light generated by a portable machine. As soon as it’s dry, it will accommodate foot and forklift traffic.

One of Harrison’s larger jobs involving DiamaPro was at the Charleston Area Medical Center in late 2014, early 2015. The center, which comprises four hospitals, is home to the largest heart program and the highest-level trauma care in West Virginia. Its laundry facility handles all linen, gowns, medical clothing and bedding for all four hospitals, as well as 50 clinics throughout Charleston.

The laundry’s floor was chipping and peeling, Harrison says, and “They couldn’t keep it clean. They had stopped using their floor scrubbers because the paint kept coming off.”

B’NA Construction was hired to remove the epoxy coating on the 30,000-square-foot laundry area floor and the warehouse loading area, add line striping for safety and apply a new floor coating. The maintenance work had to be done without incurring any downtime and, to complicate matters further, the surface prep had to be dustless to comply with health care sanitation requirements.

“That laundry runs 16 hours a day, 365 days a year,” says Scott Thome, a DiamaPro coating specialist who helped with the job. “They told me if they had to close this laundry and ship everything out it would cost $40,000 a day.”

Harrison says the UV-cured coating allowed his company to complete a portion of the floor during the eight-hour stint the laundry was idle each day. “We worked from control joint to control joint,” he says, “and made it look like polished concrete without all the pain.” The shiny floor was only taken up to a 100-grit finish.

In addition to the floors, Harrison says his company also applied the coating vertically to walls in some areas of the hospital with great results. “As soon as the light goes over it, it’s ready,” he says. And it’s easy to clean. The coating forms an antimicrobial finish that’s impervious to the chemicals in cleaning agents.

Having the right equipment is imperative to a successful install, Harrison adds. “Everything is clear so if you have any marks on the concrete, you’ll see them through the coating.”

He concedes that he has purchased a significant amount of money’s worth of equipment from Niagara Machine, including walk-behind propane grinders, HEPA vacuums, walk-behind UV lights and handheld UV lights, but the investment has been worth it. “We make money off of it,” he says. 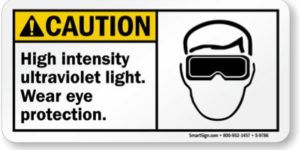 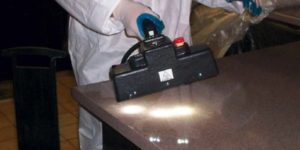 An Introduction to UV Curing Equipment for Concrete Coatings 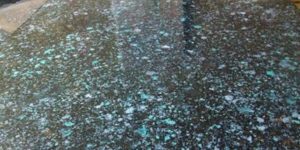