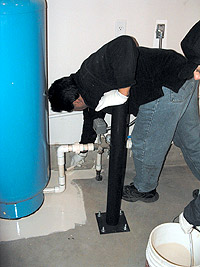 The project: a 490-square-foot garage floor at a house near Eugene, Oregon.

The goal: Complete the installation in two days at temperatures below 45° F.

The flooring system comes with the user’s choice of epoxies and urethanes. On this floor, the specialists worked with Vapor-Stop primer (a low-vapor epoxy tinted “Cottonwood”) and Versathane CRU 400 polyurethane topcoat. The two coatings sandwiched a “Medium Tan” mix of vinyl paint chips. 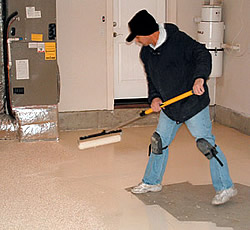 The system is usually installed in 60°F to 80°F weather, about twice as warm as what Versatile sales manager Simon Gonzales and technical director Mark Glendrange were contending with in Oregon. The minimum recommended temperature for application of these products is typically 50°F, not to mention that the humidity was also exceptionally high. These factors together would have delayed the completion of the process by more than seven days.

So they added one accelerator to the epoxy and another to the topcoat. “One of the reasons we did this job is because of the cold,” Gonzales says. “We wanted to come up here and test the accelerators.” 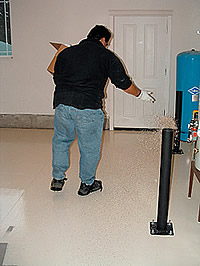 The epoxy was applied first, then the chips. Versatile recommends the broadcasting of chips to the point of rejection, laying down enough to soak into the epoxy and still leave an attractive surface afterward.

“This is the fun part,” Gonzales said as he scattered chips. There is no proper technique to pitch chips, he noted, and nearly every applicator has a unique approach. “I’m feeding chickens, just like with my granddaddy,” he said.

The team emptied a 55-pound and 27.5-pound box of chips, and used a blower to move chips into the remaining bare spots. The crew estimated that once the chips were scraped, swept and blown, about three-fifths of them would be recollected for recycling.

Then, finally, came two coats of the Versathane CRU. With only two coats, the floor was skid-free without the use of aluminum oxide. 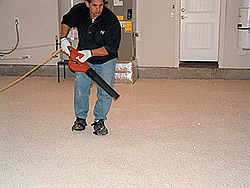 The accelerators worked. After the first coat of Versathane started curing, it had “the same integrity as if someone had done it without an accelerator in 70°F or 80°F heat,” Glendrange said. “The edge of the garage was tacky, but you could walk on it.”

The hardest thing about laying epoxy is prep work, Gonzales said. But on this job, prep was relatively easy. The slab was still only six months old, so the relatively few oil and fluid stains required only roughing. The ghosts of the stains were still visible as the Versatile team began to prime and, as they promised, the vinyl chips covered everything.

Cracks proved to be a slightly bigger problem, but not by much. Four long control joints, installed with zip strips, showed only as hairline cracks before the process started. They were still slightly visible after the excess chips were swept away, but that was easily remedied. The team simply applied the first coat of Versathane, then scattered more chips on top of the cracks. Then, once again, they removed the loose chips. They spread the second coat of Versathane over the works. 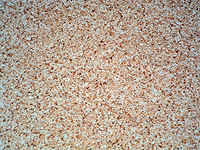 Gonzales said putting down a chip flooring system is one of his favorite applications at Versatile. “You can hide multiple sins with this,” he said. “This covers everything.”

If needed, a contractor or homeowner can go back in a year’s time and put chips and sealer on trouble spots, and the end result will look identical to the first go-round.

Overall, the project went off without a hitch, Gonzales said. 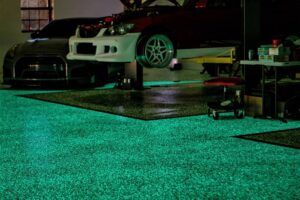 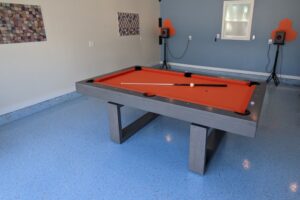 Versatile Photo Contest Winner for May 2021 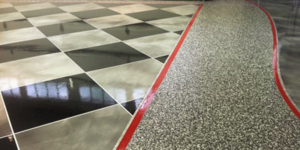